Derek Stingley Jr., Sauce Gardner and the Mysterious No. 3 Pick 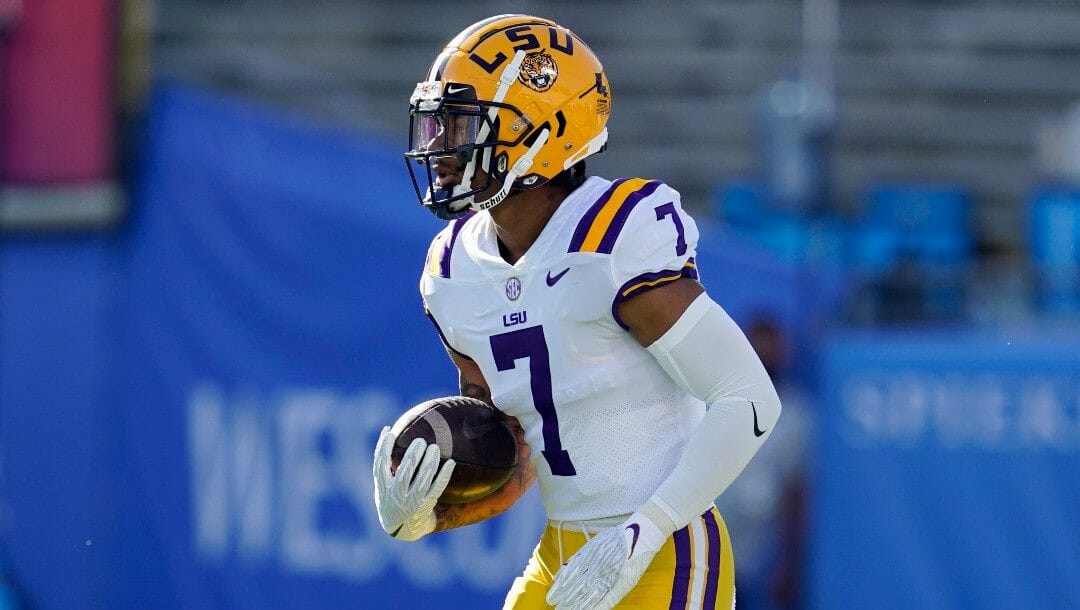 Just a few days ago, NFL draft odds at BetMGM priced Ahmad “Sauce” Gardner as a -500 favorite to be the first corner taken Thursday night.

But on Wednesday morning, the landscape shifted pretty drastically. All of a sudden, LSU corner Derek Stingley Jr. was the odds-on favorite to be selected at No. 3, either by Houston or in a dramatic trade situation.

But if you take a look at that First Corner market, Gardner is still the favorite to be the first corner taken. He’s dropped from -500 to -200, but he is the favorite nonetheless. And everyone seems to agree that neither player will be drafted at No. 1 or No. 2 overall.

So… what the hell is going on?

NFL Draft: What’s Happening with the No. 3 Pick?

Much ink was spilled last year over the quarterback drama revolving around San Francisco’s No. 3 pick.

Everyone knew that Trevor Lawrence was going at No. 1, and everyone knew Zach Wilson would go to the Jets at No. 2. The real mystery was what the 49ers would do at No. 3. (On our podcast, The Lion’s Edge, we were all over Trey Lance from Day 1.)

The No. 3 pick hasn’t been an all-consuming topic for blogs and sports radio hosts this year, but there is some buzz picking up in the final 48 hours before the draft. It was widely assumed that Houston – a depleted roster in need of multiple players all over the field – would make a safe pick.

For most analysts, that meant an offensive tackle (like Ekwonu), a corner (like Gardner) or one of the remaining pass rushers. Maybe Kayvon Thibodeaux.

The Stingley news throws all that into chaos. At BetMGM, you could have bet online for Stingley to be the No. 3 pick at +750 odds just two days ago. But overnight, a massive amount of money came in on Stingley to go No. 3, which is what shifted the odds.

How much money are we talking about? Well, only about 19% of the No. 3 tickets at BetMGM were on Stingley as of Wednesday morning, but more than half of the entire handle was on Stingley.

As of Thursday morning, those splits were up to 22% of tickets and 61% of the money.

Unsurprisingly, Stingley at No. 3 is a big liability for the sportsbook.

Derek Stingley Jr. let all the talent shine at his Pro Day. ⭐️ (via @NFLFilms)@stingjr | @lsufootball

Given the extremely specific nature of the bet, it’s possible that this money came from someone with inside information of what the Texans want to do at No. 3. After back-to-back disappointing years at LSU, there was very little discussion of Stingley as a top-5 pick in this year’s draft before Wednesday.

However, if you’re looking for ways to make the NFL Draft betting odds work for you in the aftermath of the Stingley news, there are still some options.

For one, you could buy back in on Ekwonu to go at No. 3. His +200 price, relative to Stingley, means he’s still a highly likely option at No. 3.

You could also buy low on the Sauce Gardner in the First Corner Drafted market. In my discussions with NFL Draft experts over the last week, everyone seems to be in agreement that Gardner is unlikely to make it past the first five or six picks.

If Stingley doesn’t go at No. 3, Gardner is a virtual lock to go first, and he was 2.5 times as expensive a bet just 48 hours ago.

My favorite bet, though, is the one I wrote about on Wednesday.

With Travon Walker emerging as the potential No. 1 pick earlier this week, and Stingley now flirting with a top-3 status of his own… where, exactly, is Thibodeaux supposed to go?

I’m not suggesting he won’t be drafted at all, but his positional prop is at 4.5, with major juice to the under. It hasn’t moved much, either. Unless the Jets take him at No. 4 – hardly a lock, given that they arguably have bigger needs at WR, DB and perhaps even OL – it seems like he will almost certainly fall to five.