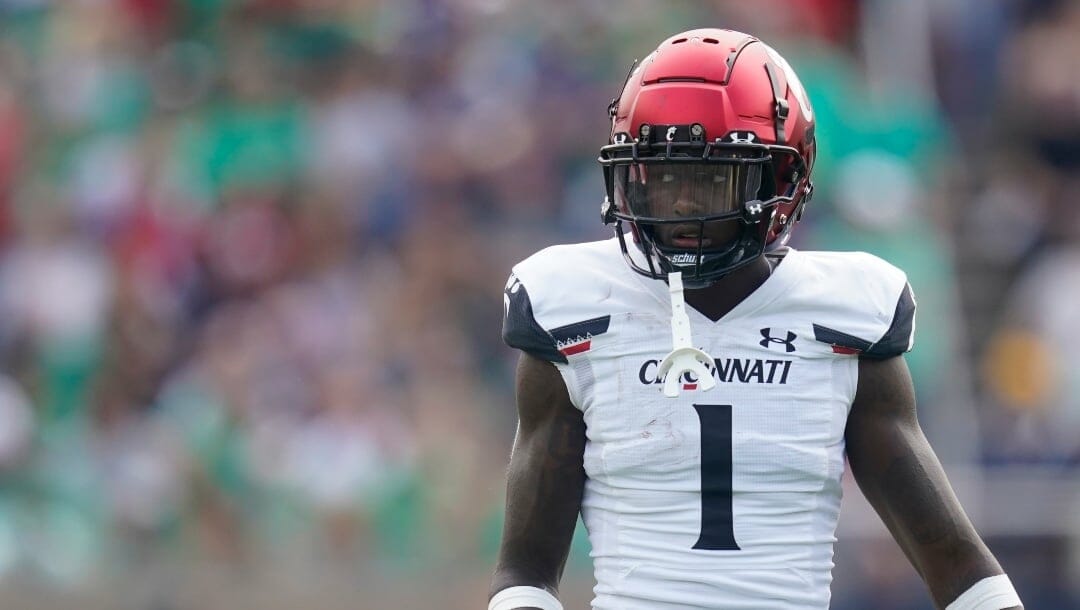 South Carolina’s Jaycee Horn was the first cornerback off the board in the 2021 NFL Draft when he was selected by the Carolina Panthers with the 8th overall pick. Alabama’s Patrick Surtain quickly followed with the very next selection by the Denver Broncos.

Looking at the 2022 NFL Draft odds, Ahmad “Sauce” Gardner’s over-under selection is 7.5, the highest corner available on the board and five above Derek Stingley’s 11.5.

Don’t let the fact that he comes from a Group of Five Conference fool you; Gardner is the best cornerback in the 2022 NFL Draft. The shutdown corner was a big reason why the Cincinnati Bearcats became the first non-Power Five team to ever make the College Football Playoff.

Will his stellar performance on the field be enough for him to earn a top pick in the NFL Draft?

Ahmad Gardner has a long frame for a corner, standing at 6’3” with arms measuring 33 ½” inches. Despite the long frame, he moves extremely well — he has lightning-quick feet and has jaguar-like movement. He earned AP All-American honors in 2021 and the recognition was well deserved.

Gardner graded out with an 87.2 coverage grade at Pro Football Focus, fourth in the country among players who recorded at least 400 coverage snaps.

Sauce was the definition of a shutdown corner in college. Quarterbacks rarely looked his way — because really, why would you? — and they didn’t have much success when they were foolish enough to do so. According to PFF, Gardner was targeted only 37 times in 2021. He allowed a mere 18 catches for 122 yards the entire year.

The natural inclination for most people, when faced with the sheer absurdity of Gardner’s statistical performance, is to question his opposition. Was he tested at all in the American Athletic Conference, where Cincinnati ran roughshod over any and all challengers?

You might recall that the Bearcats made it to the College Football Playoff and squared off with the mighty Alabama Crimson Tide, home of approximately 500 five-star wide receivers. Gardner allowed only 14 yards in that game despite being targeted four times. Bryce Young and company knew that Gardner is a master of his craft and therefore wisely opted to attack elsewhere.

Gardner primarily excelled in press-man coverage while with Bearcats, taking full advantage of his long, wiry frame. That’s where he’s best and it’s how he should primarily be utilized at the next level. However, he also showed capability in limited looks in zone coverage and in the slot.

Now that we’ve established Gardner is an elite cornerback prospect, let’s ask ourselves: Does this mean that he will be selected within the first seven picks of the 2022 NFL Draft?

While Gardner has proven to be the real deal, some NFL draft executives will be discouraged by taking him with a top selection because he didn’t play at a typical college football powerhouse.

The draft is dominated by players from the usual schools and the usual conferences, so seeing an outsider could set off an alarm for those making decisions. Whether you consider it the right move or not, it’s simply factual: Group of Five players are not often selected in the first round of the draft (only three in 2021), much less within the top seven picks.

LSU’s Derek Stingley Jr. is considered by most scouts to be the second-best cornerback prospect on the board. If an executive wants to take a corner early in the draft and can choose between a smaller-school guy (Gardner) and a former five-star from the talent factory of LSU (Stingley), one can see why going with the more familiar option is a possibility.

Stingley has a few question marks, but some executives may find it difficult to shake the fact that he compiled six interceptions in the SEC as a true freshman for a national championship-winning team.

Since 2017, only two corners have been taken within the first seven picks in their respective drafts: Denzel Ward went fourth overall to the Cleveland Browns in 2018 and Jeff Okudah went third to the Detroit Lions in 2020. It’s no sure thing that any cornerback is selected within the top seven picks.

One of the teams rumored to be in the mix for a defensive back, the New York Jets (No. 4 overall pick) could opt for Gardner, nab Stingley with the 10th pick which they also own, or opt for Notre Dame’s Kyle Hamilton at safety. At No. 5 and No. 7 overall, the New York Giants have their most pressing need along both lines of scrimmage.

Gardner is an elite prospect, but it seems like a coin flip that any cornerback is selected within the first seven selections. Add to that, that there’s not much precedence for a Group of 5 corner going this high in the draft, so we’ll be taking Gardner to go over his draft position at plus money.