Why Were We So Sure Aidan Hutchinson Would Go No. 1 Overall? 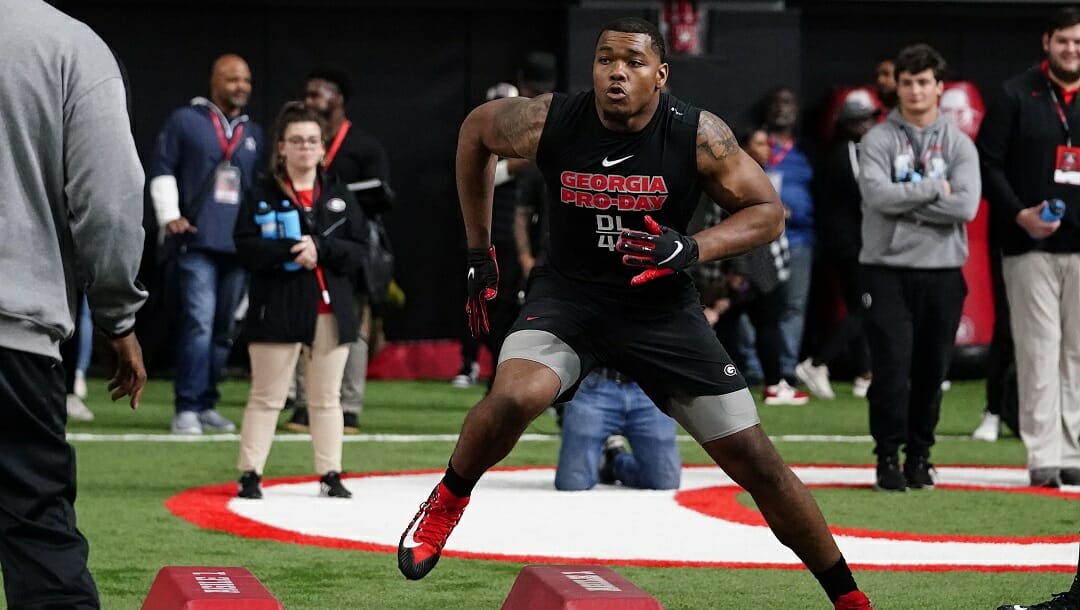 I was finishing up some daily research on MLB odds and trends last Thursday when I first saw it: a big, splashy, front-page NFL Draft feature on Aidan Hutchinson at the top of the headlines on my ESPN app.

I snapped a screenshot because I just knew I’d be smugly revisiting it in a few days’ time.

Took this screenshot last Thursday. At the time, Hutchinson was -170, which meant there was an implied 37 percent chance of someone else aside from Hutchinson going No. 1. pic.twitter.com/JOW2Kuaerp

Just like the tweet says – the odds at the time implied that there was nearly a 40% chance that it would be someone other than Aidan Hutchinson. Yet if you followed the discourse around the first pick, you would have thought that Aidan Hutchinson to the Jags had been a lock since his birth.

My instincts told me to fade accepted knowledge like this, but it wasn’t until this ESPN story splashed in front of my face that it consciously clicked in my brain. There was a massive market inefficiency at No. 1.

When the NFL draft odds first opened, Hutchinson was +100. Months later, he hadn’t really moved that much – just down to -175.

Compare that to previous years, where well-connected bettors or pre-draft leaks dramatically shifted odds toward the eventual No. 1 pick.

(On our podcast, The Lion’s Edge, I have previously told the story of how I was casually sitting at a Buffalo Wild Wings in Harrisonburg, Virginia the day before the 2018 draft, looking at gambling odds, when I suddenly noticed that Baker Mayfield had become the -300 favorite out of nowhere. That was the first NFL Draft bet I ever placed.)

By now, you’re probably aware that Travon Walker – once priced at +3000 to go No. 1 – has been upgraded to favorite status. He’s -225 right now at BetMGM. And while Hutchinson had the most individual bets on Monday to go No. 1 at nearly 20%, Walker had drawn 35% of the overall betting handle. Sharp money talks.

At this point, there’s probably not much of an angle to play the No. 1 pick, as the market has priced itself out – unless, of course, you think the pick ultimately will swing back to Hutchinson or even Ikem Ekwonu.

Here is my speculated four players the Jaguars are considering for the No. 1 pick: Edge rushers Aidan Hutchinson and Travon Walker; offensive tackles Evan Neal and Ikem Ekwonu.

Personally, I played all this by betting Hutchinson to go No. 2 to Detroit once the Walker momentum started to happen. There was a solid 24-hour window earlier in the week where it seemed clear that Walker might be the guy at No. 1, but Hutchinson’s odds were still quite good to go No. 2.

I got in at -110; the price is now -200. And in my discussion with Bleacher Report lead draft analyst Connor Rogers on Monday night, we said very clearly that, if we know anything, “we know Hutchinson is going in the top two.”

That, too, is now a market that’s virtually priced out with no play on Wednesday. But one key lesson here for prospective NFL Draft bettors who are still looking to create a positive position is that there are nearly always downstream effects that you can look to capitalize on.

For instance, the addition of Walker’s presence at the very top of the draft makes the first handful of picks even more crowded than it already was.

Given those assumptions, there’s not much room for Kayvon Thibodeaux to go before No. 5. That’s important because his draft selection prop is over/under 4.5. You can bet that at a nice +140 price if you buy in on the over.

The other lesson is simple: question every assumption. Especially the ones where everyone seems to agree. That’s where there’s often big money to be made when you bet online.

Now, I’ve got to run. All of a sudden, Derek Stingley Jr. is the favorite to go No. 3 overall…