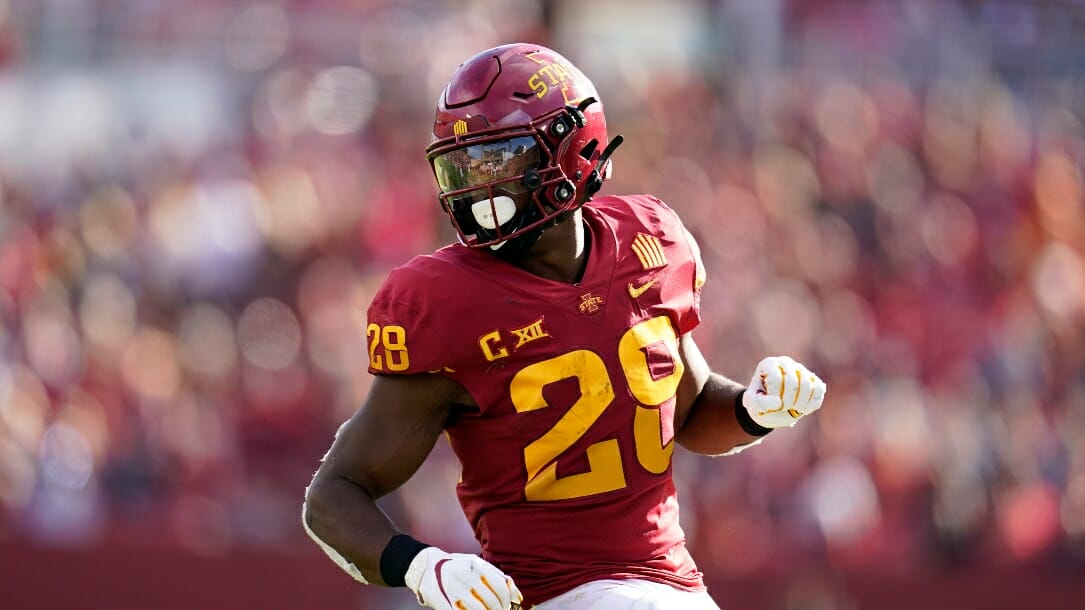 Two running backs selected in the first round in 2021 NFL Draft; the Pittsburgh Steelers took Alabama’s Najee Harris with the 24th pick and the Jacksonville Jaguars quickly followed by calling Travis Etienne’s name with the very next selection.

In NFL Draft odds, Iowa State’s Breece Hall is the favorite to go off the board first. Behind him is Michigan State’s Kenneth Walker III within striking distance and longer shot Isaiah Spiller out of Texas A&M.

Breece Hall is the deserving favorite. The former Cyclone was an immediate contributor on campus, giving his team three seasons of excellent production before entering the draft after his junior campaign.

He was the most productive back in college out of the top three selections, having accumulated 3,941 rushing yards and a whopping 50 touchdowns during his time at Ames. He possesses receiving skills as well and displayed that on his tape, adding 734 yards and six touchdowns through the air in his career.

Hall is NFL-ready and is primed to be a three-down back for whichever team decides to pull the trigger. He likely goes near the end of the first round, which in most recent drafts would make him the first runner selected. The two teams rumored to be potential landing spots for Hall are the New York Giants (25) and Tampa Bay Buccaneers (27). It would be surprising if Hall wasn’t the first runner off the board and is ready to benefit any team that is looking to compete now.

Kenneth Walker (+250) spent his first two years in college at Wake Forest, contributing immediately as well, as he accumulated 1,158 yards and 17 touchdowns on the ground over his two years at Winston-Salem. It was evident that Walker was a very gifted runner during his time at Wake, but there were still plenty of questions as he played in a highly unconventional system and rarely handled a full workload of carriers.

Most of those questions were erased when Walker made the best decision of his life and transferred to Michigan State before the 2021 season. He shined for the Spartans as a workhorse runner, racking up 1,636 yards and 18 touchdowns in just 12 games. Not only was the statistical profile top-notch, but he also came through on the big stage in crucial moments — most notably in a comeback win over Michigan, when he notched 197 yards and five touchdowns.

Walker did not display much in terms of receiving chops in college, catching just six passes at Wake and 13 for Sparty. He also only has one year of elite production on his ledger. There are more questions than there are with Hall, but there isn’t quite as big of a gap between Walker and Hall as the odds indicate. A team in win-now mode likely opts to draft the Michigan State product, meaning he’s liable to go in the same range as Hall.

Isaiah Spiller (+1200) has three years of excellent production in the SEC, including two 1,000 yard seasons. He ultimately racked up 2,993 yards and 25 scores on the ground while adding 585 yards and a TD through the air. His ability as a receiver means that he should challenge for a role as a three-down back.

There’s a decent gap between Spiller and the top two runners on the board. The former Aggie does many things well while failing to bring any elite traits to the table which is why the long odds seem justified.

The online sportsbook has you covered for NFL Draft betting this year. From No. 1 overall pick odds and player props to positional odds and team selections, there’s a variety of NFL Draft odds before and during the draft.