NFL Draft Odds: Who Will Be First Quarterback Selected? 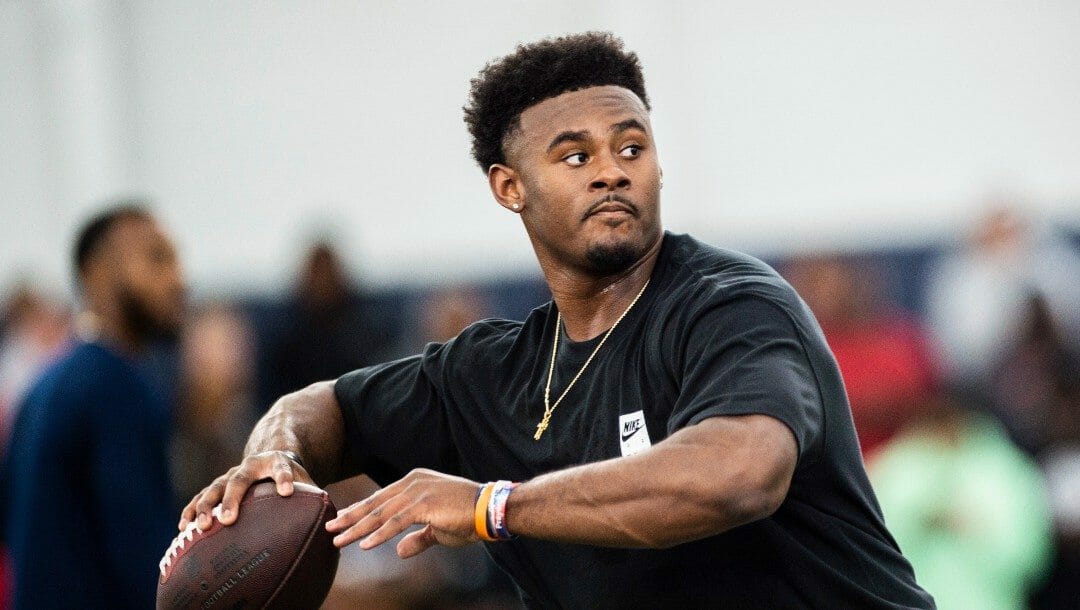 Football is a game largely dominated by the quarterback position. The NFL Draft is a natural reflection of the importance placed on the position, as every draft since 2015 has seen multiple quarterbacks selected within the first 10 picks.

The 2021 NFL Draft was no different as quarterbacks were taken with each of the first three selections. Trevor Lawrence went to the Jacksonville Jaguars first overall, then the New York Jets selected Zach Wilson, followed by Trey Lance at No. 3 to the San Francisco 49ers.

In NFL Draft odds, Liberty’s Malik Willis is the favorite to be the first off the board at the position, while Pittsburgh’s Kenny Pickett is close behind.

It happens like clockwork every year, where several quarterbacks collect helium and start rising up draft boards after the NFL Combine and pro days.

It’s long been a refrain that this year’s crop of quarterbacks is a lackluster one but yet that hasn’t stopped the hype train.

Liberty’s Malik Willis is the -185 favorite. The dual-threat QB transferred away from Auburn after backing up Jarrett Stidham for two years and thrived at Liberty under Hugh Freeze’s ROP-heavy scheme, accumulating 74 total touchdowns over two seasons.

His dynamic rushing ability sets him apart from other prospects in this class. In two years at Liberty, he rushed for 1,822 yards and 27 touchdowns. Combine that athleticism with a cannon of an arm and it’s easy to see why teams are enamored with his traits.

Willis struggled with his accuracy and his reads in college, which resulted in too many turnovers and sacks. Those are serious concerns at the position and in most years it’d be enough to drop him down draft boards, but this underwhelming draft class at quarterback is keeping his stock inflated.

The Detroit Lions may take him as high as No. 2 overall and the Pittsburgh Steelers reportedly have an affinity for his game. He has the highest ceiling in the class and is the deserved favorite to be the first selected at the position — but it’s far from a sure thing.

Pittsburgh’s Kenny Pickett was a solid, if not mildly underwhelming, starter for three seasons before lifting off in 2021.

After posting a 13:9 touchdown-to-interception ratio in back-to-back years in 2019 and 2020, Pickett exploded for 42 touchdowns to only 7 interceptions in 2021.

His lone season of high-level success vaulted him up draft boards, where he’s now a threat to be selected within the top five picks. He’s listed with +160 odds to be the first QB taken.

Pickett lacks arm strength and has only one season of quality production under his belt. He often benefited from YAC by star wide receiver and future NFL first-round pick Jordan Addison.

Still, his accuracy is a plus and the Carolina Panthers could be a landing spot at No. 6 overall. There’s a slight chance he hears his name earlier, especially if the Panthers trade up into the top 5.

Willis’s odds are highly contingent on the Lions selecting him with the second overall pick. If the Lions go a different direction, it’s easy to envision a scenario where Willis falls and Pickett winds up as the first QB selected.

Howell and Ridder are longshots without much of a conceivable path to cashing a ticket if you bet on them.

Matt Corral’s +1400 odds are mildly interesting. The Ole Miss product has plus athleticism and a cannon of an arm. He’s played in an RPO system and appears poised to thrive in a modern NFL scheme. The biggest knock on him a year ago was turnovers, but he improved mightily in that facet in 2021.

It’s easy to see a team taking a plunge on Corral. It’d likely be contingent on Willis falling, but that’s a real possibility. There are several teams still in need of a quarterback and any number of them could trade up in the draft if they’re captivated by Corral.