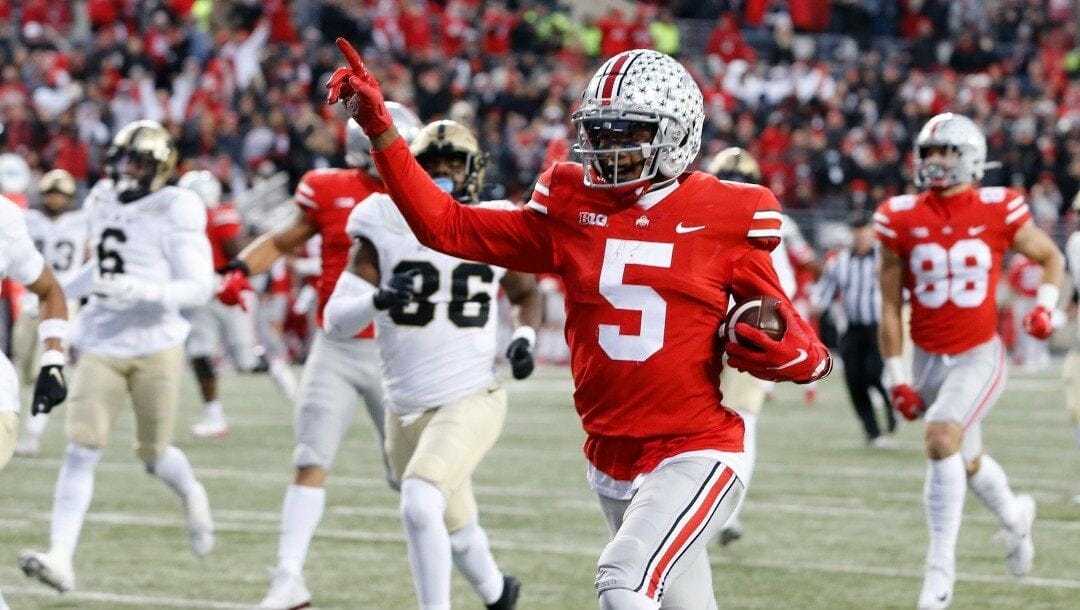 The NFL Draft is a week away and there are plenty of options when it comes to NFL Draft betting.

Ohio State’s Garrett Wilson is expected to be one of the first two wide receivers selected. Wilson’s draft position Over/Under is set at 10.5, with the Over at +130 and the Under at -175.

It’s unusual for true freshmen to make an immediate impact on the field at Ohio State.

The Buckeyes are one of the top teams in the country and are typically loaded at every position, so it’s common for even five-stars to have to wait behind more established veterans at their respective position before garnering significant minutes.

Wilson is an exception to that rule.

The ultra-talented wideout forced his way onto the field as a true freshman in 2019, making an immediate impact with over 400 yards and five touchdowns. He improved his stats year over year after that, topping out with 70 receptions for 1,058 yards and 12 touchdowns in 2021.

Wilson is expected to be one of the first receivers selected in the 2022 NFL Draft.

Current wide receiver betting odds have Wilson (+115) as the favorite to be the first player taken at the position, with his former teammate (Alabama transfer) Jameson Williams behind at +160.

While Williams has been gaining steam heading into the draft, this scenario may create an arms race where teams take a receiver early to ensure they nab a top player at the position before the elite prospects are gone.

This number is aptly set at 10.5, as the receiver-needy New York Jets have two selections within the first 10 picks (No. 4 and No. 10 overall).

With reports that they were interested in acquiring Tyreek Hill, DK Metcalf, and more recently Deebo Samuel this offseason, the Jets are in the wide receiver market.

One glance at their current depth chart makes it easy to see why they are looking for pass catchers to help second-year quarterback Zach Wilson.

Another team within the top-10 with a need at wide receiver is the Atlanta Falcons.

Calvin Ridley is suspended for the entire 2022 season and his future with the franchise was already in doubt, leaving Atlanta with a glaring need to add pass-catching talent outside of Kyle Pitts.

Generally speaking, the NFL is valuing pass catchers more than ever.

Last year saw three receivers selected within the top-10 picks: Ja’Marr Chase to the Cincinnati Bengals, Jaylen Waddle to the Miami Dolphins, and DeVonta Smith to the Philadelphia Eagles.

All three had immediate success, most notably with Chase being an integral piece of the Bengals’ run to the Super Bowl.

Wilson is among the top prospects at the position and it’s difficult to see him falling far. Two teams in the top-10 have a glaring need at receiver and it’s always possible another franchise trades up to avoid missing out on elite talent.

This number is sharp at 10.5, but there are slightly more avenues for Wilson falling with the first 10 selections than there are for him slipping beyond that number.