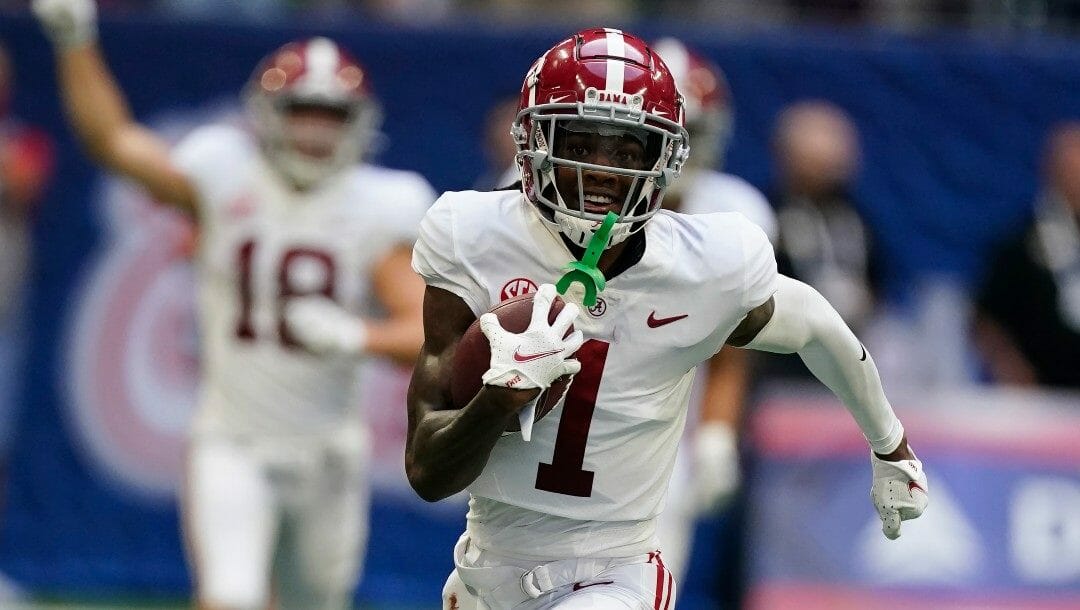 The NFL Draft is a few days away and there are plenty of options when it comes to NFL Draft betting.

Wide receiver is a position of value in the modern NFL, as evidenced by the fact that three receivers were selected within the first 10 picks a year ago.

One of the top receivers overall is Jameson Williams, who has a draft position set at 12.5.

Ohio State’s Garrett Wilson is the -200 favorite to be the first wide receiver selected in the draft with Jameson Williams (+200) holding the second-lowest odds to be the first pick at the position.

The Alabama product is establishing himself as a player likely to be selected high on Thursday night and has surpassed Drake London (+225 to be the first wide receiver selected) as the public consensus WR2 in the class.

London’s odds have been falling, as he was +150 to be the first wide receiver off the board only a couple of weeks ago.

The draft position for Williams is set at 12.5, so let’s examine the case for both sides.

Williams transferred from Ohio State to Alabama before the 2021 season and lit the college football world on fire in his lone year in Tuscaloosa, racking up 1,572 yards and 15 touchdowns as Heisman winner Bryce Young’s go-to option.

He possesses true game-altering speed, as evidenced by his 19.9 yards per reception. It’s not difficult to see why a team would look to add such a dynamic weapon to its passing game early in the draft.

The case for Williams going Over 12.5 is that he only has one year of elite production on his resume and is coming off an injury.

During his tenure in Columbus, he sat behind two of the other top wide receivers in this draft class — Garrett Wilson and Chris Olave. Williams doesn’t have the biggest frame and it’s unclear how he’ll handle the physicality of NFL cornerbacks.

The most pressing concern of them all lies in his health as he recovers from a torn ACL suffered in the College Football Playoff National Championship game.

Williams has been gaining steam heading into the draft and that is expected to continue this week.

A receiver with true game-changing speed and playmaking ability can open up an entire offense, and Williams is arguably the most explosive offensive weapon in this draft class.

Wide receivers are going at a premium in today’s NFL, with three wideouts going within the first 10 picks of the 2021 Draft: Ja’Marr Chase to the Cincinnati Bengals, Jaylen Waddle to the Miami Dolphins, and DeVonta Smith to the Philadelphia Eagles.

All three top-10 wide receiver selections from last year’s draft class paid immediate dividends for their respective squads and it’s easy to envision decision-makers hoping to emulate that success by selecting a playmaking threat early in the first round.

The New York Jets have two selections within the first ten picks and the Atlanta Falcons select eighth. Both are badly in need of game-changers at the position.

The New York Giants also own two top-10 picks and are actively shopping last year’s first-round wide receiver Kadarius Toney, according to numerous reports. A trade-up is always possible, and quite frankly any team in the league could benefit from the dynamic playmaking ability Williams has to offer.

There seem to be more pathways for the Under 12.5 (-135) and those odds will likely continue to move in that direction.