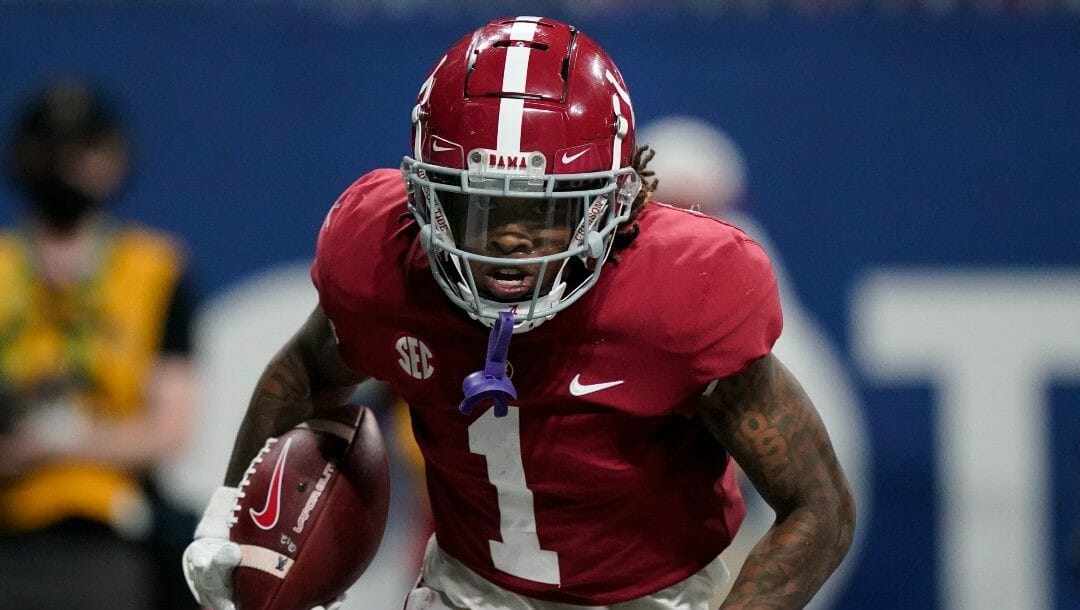 The 2022 NFL Draft is fast approaching and bettors are looking closely at the NFL Draft odds for a number of different things.

Speaking of fast, I am handing out an NFL Draft Superlative award for the most explosive playmaker in the draft class.

The winner of the award is none other than Jameson Williams of the Alabama Crimson Tide.

Thirty different wide receivers gained over 1,000 yards in the 2021 NCAA regular season. Four of them averaged 20 yards per reception or more. Only one of them is in the 2022 NFL Draft class — Jameson Williams.

Williams averaged a whopping 20.6 yards per reception in the regular season en route to 1,259 yards and 13 touchdowns despite playing against elite competition in the SEC. Did his level of play drop off in the postseason? Hardly.

He managed 302 yards, two touchdowns, and 17.8 yards per reception in 9.5 quarters against arguably the top two secondaries in college football: the Georgia Bulldogs (twice) and Cincinnati Bearcats.

Concerns over his physical frame and health (torn ACL in the national championship game) exist, but there’s no denying the fact that Williams is an explosive play waiting to happen.

In NFL Draft betting odds, Williams has the second-lowest odds at +225 to be the first wide receiver selected. The Over/Under for his draft position is set at 12.5, with the over at +140 and the under -185.

Williams didn’t test at the combine as he recovers from his ACL injury. Therefore, there are no 40-times and 3-cone times to fawn over. There is a season’s worth of tape of Williams embarrassing defenders at the highest level of college football.

Williams takes home our award for the most explosive playmaker in the 2022 NFL Draft.