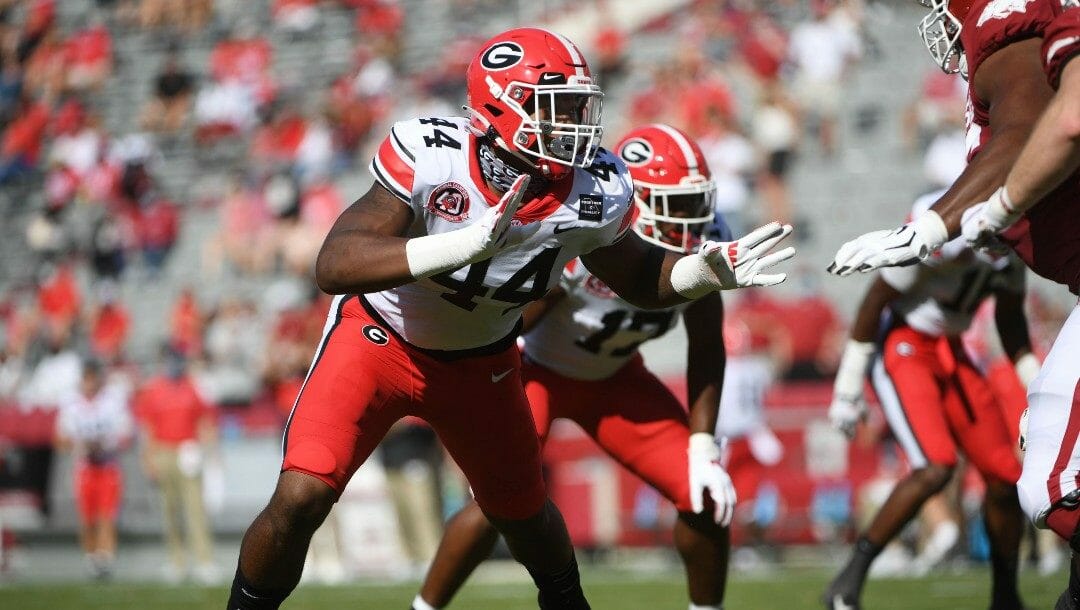 Travon Walker, a defensive end out of Georgia, has officially passed Aidan Hutchinson as the odds-on favorite to be selected first overall in the 2022 NFL Draft.

Despite there being risers every year as the draft approaches, this is somewhat of a surprise.

Walker wasn’t a lock to even be selected in the top 10 prior to the NFL Scouting Combine, but with what he did there in front of scouts and executives teams started to look a little differently at how he can impact their franchise.

The Jacksonville Jaguars have the first overall pick on Thursday and general manager Trent Baalke has a history of liking players who test well when it comes to arm length at the combine. Walker did just that, sitting in the 95th percentile for edge rushers.

Walker also had a time of 4.51 in the 40-yard dash, which placed him in the 98th percentile among all defensive linemen.

This is a 6-foot-5, 275 lb man making an athletic play to cause the INT. Travon Walker drops into coverage, gets a piece of the football by diving into the passing lane which results in the turnover.

His athletic upside as well as his versatility makes him so coveted. #NFLDraft pic.twitter.com/Uk8ecxmMC5

The hype is building around the defensive end who just won a national championship at Georgia, but there are arguments to be made that Hutchinson is a safer pick. The Jaguars might not have the luxury to hope that Walker eclipses his high ceiling and stick with the less risky play that may be Hutchinson.

The current odds at the BetMGM online sportsbook have Walker as the favorite to be first off the board to Jacksonville at -175, while Hutchinson has dropped to +135.

Hutchinson still owns 19.5% of tickets, while also boasting the second-highest handle percentage at 25.3%, which has seen Walker take on the top spot at 35%.

Evan Neal, an offensive tackle out of Alabama, has the second-highest ticket percentage at 19.3%, and third highest handle at 15.1%. Neal opened at +2500 and climbed to +1600, but it would be a longshot if he was the top selection on draft day.

Walker, Hutchinson, and Neal are all the biggest liabilities in terms of being the first name off the board on Thursday evening.

NFL Draft Odds To Be No. 1 Overall Pick