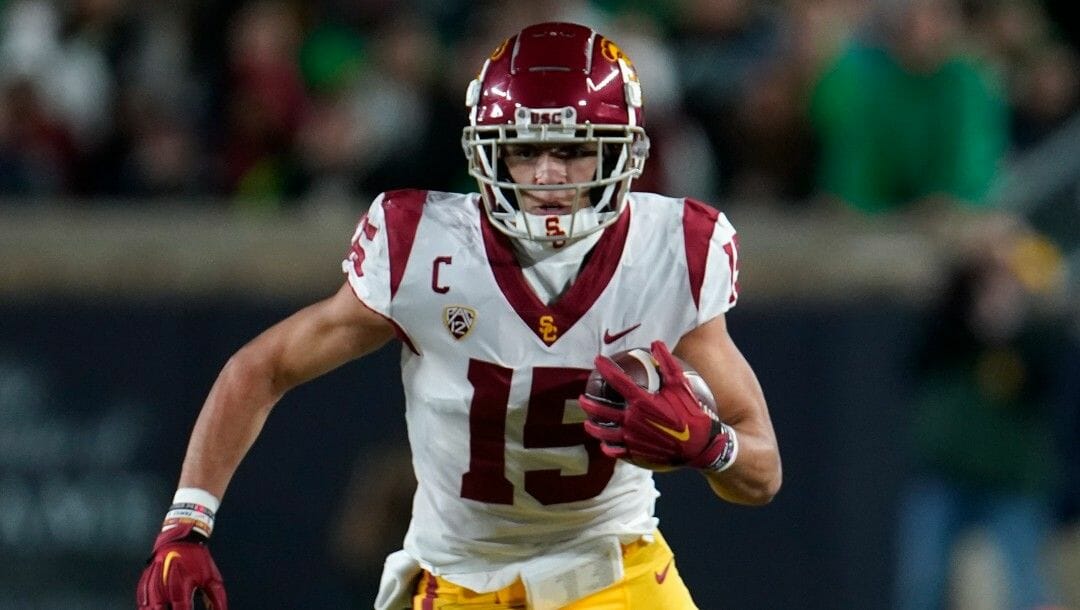 A defender tightly covering him, pinned near the sideline, with only one hand to catch the ball, seemingly nothing was going to stop Drake London.

The USC wide receiver, who’s one of the top prospects at his position in this year’s NFL Draft, was pressed at the line in a game at Colorado last season. The Trojans were a yard from the end zone, thanks to his contested catch earlier.

London shuffled his feet as cornerback Christian Gonzalez tried to slow him down. London advanced about five yards, then moved back toward the ball after Kedon Slovis passed out to him along the left sideline.

London turned, using his frame to keep Gonzalez out of the picture. He snatched the ball out of the air, remaining inbounds as well.

He has shown he can be a favorable target for quarterbacks, which will likely continue at the pro level.

London has the second-best NFL Draft odds to be the first wide receiver selected at +135. His odds of being picked third overall are +20000.

Michigan defensive end Aidan Hutchinson has the leading NFL Draft betting odds to be picked first at -225 as of March 30.

The Philadelphia Eagles could use a receiver of London’s skill set opposite DeVonta Smith.

With 68 catches, 976 yards and five touchdowns last season, Smith was impressive in his first pro year after earning the Heisman Trophy while at Alabama. But other than that, no other receiver was a consistent target for quarterback Jalen Hurts.

Smith was 26th, both by Pro Football Focus’ receiving grades and Football Outsiders’ DYAR metric. No other Eagles receiver was in the top 50.

Smith and London’s talents could complement each other, giving the Eagles more scheming opportunities in their passing attack. If the Eagles are committing to Hurts, London would help set him up for success.

London made a strong impact immediately at USC, and he eventually worked his way up to a No. 1 role.

In 2019 as a true freshman, London started nine games and caught 39 passes for 567 yards and 5 touchdowns. He was a Freshman All-American.

Following that season, he joined the Trojans’ basketball team and played in three games. This stint further illustrates his athleticism.

That all led to a superb final collegiate season, even though he only played 7.5 games due to a broken ankle.

In that short time, he caught 88 passes for 1,084 yards and 7 touchdowns. Before his ailment, he was on pace to break Marqise Lee’s program single-season records for receptions and yards.

He’s only one of two Power Five players ever to total; 88 receptions in eight games. He is the only Trojan to haul in 15 or more targets in two different games.

London is very physical. He will simply outfight opponents for catches. He’s excellent at high-pointing 50-50 throws.

He can also adjust to the ball while it’s in the air and works well on the fly to find open spaces in zone coverage. Combined with a 6-foot-4, 219-pound frame, this makes for a large catch radius.

When USC was trailing Stanford in the first quarter last season, the Trojans had the ball at their own 29-yard line.

London was pressed at the line by cornerback Kyu Blu Kelly, who followed him closely all along his route. When London was targeted and underthrown, he stopped and went back toward the line of scrimmage to snag the pass.

London then broke a tackle. Another defender dove at his feet, but he avoided that takedown as well. He kept his legs churning until he was brought down within the opposite 35.

Drake London has more forced missed tackles (49) than ANY other receiver since 2019 ✌️ pic.twitter.com/4aBLlNunyW

London’s footwork on his routes stands out, as he keeps defenders guessing which way he’s going to break until the last second. However, he could be more efficient with his feet off of the line of scrimmage.

That will be particularly important in the NFL when he’s working against faster corners. While he didn’t run the 40-yard dash at the NFL Combine, his most glaring weakness is his speed. That will make it easier for defenders to blanket him.

That said, he is shifty in the open field. With his stature and creativity, he’s difficult to take down.

At Colorado, London caught a screen pass on the perimeter. Cornerback Mekhi Blackmon shed a block, though, and dove for London’s legs.

London leapt over him. And even though he was hit midair, he stuck the landing and kept fighting for more yards. Three defenders were eventually needed to bring him down.

London is capable of earning those extra yards in the NFL, too.