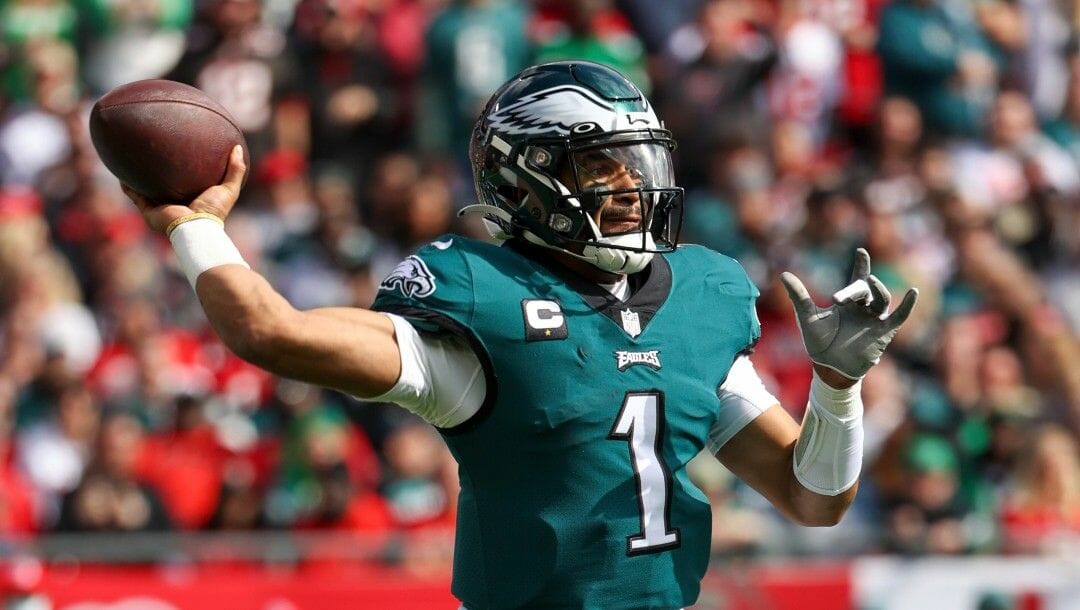 After trading for wide receiver AJ Brown, the Eagles are fully expecting quarterback Jalen Hurts to lead them deep into the playoffs.

Here’s a position-by-position look at the Eagles, who have NFL odds to win the Super Bowl at +2500.

Hurts will have plenty of reasons to be motivated in 2022.

The Eagles appear unready to commit to him long term until after this season. His four-year rookie contract will expire after 2023, and the team could very well move on from him and draft another quarterback next season.

Hurts was 17th in both DYAR and DVOA last season. His mobility also brings an added element to help Philadelphia’s offense. With the addition of AJ Brown and DeVonta Smith having another year in the league, Hurts will have no reason to have an average season.

The Eagles’ running back group featuring Miles Sanders is ranked No. 20 for the upcoming 2022 NFL season, with an overall grade of 63/100.

While quarterback Jalen Hurts led the team in rushing yards and attempts, Sanders made the most of his tries when he had the ball. He tied for fifth in the league with 5.3 yards per attempt, totaling 770 for the year.

And while Sanders didn’t score any touchdowns, backups Boston Scott and Kenneth Gainwell combined for 12.

The Eagles’ wide receiver and tight end group featuring AJ Brown, DeVonta Smith and Dallas Goedert is ranked No. 6 for the upcoming 2022 NFL season, with an overall grade of 91/100.

The Eagles’ receiver corps went from solid to elite this offseason when they picked up Brown via trade. Graded seventh by PFF, his connection with Jalen Hurts could help the Eagles’ offense become more explosive than in recent years.

Smith made impressive strides as a rookie out of Alabama. In 2021, he caught 68 throws for 976 yards and five touchdowns.

To round out the group, Goedert was first among tight ends in DVOA last season and was third in DYAR. Graded second by PFF, he hauled in 62 passes for 922 yards and four touchdowns last year.

The Eagles’ best O-linemen have been staples in the league for years. Center Jason Kelce and tackle Lane Johnson were third and 10th in PFF’s grades at their positions last year. Meanwhile, Jordan Mailata was the best on the team as he was sixth among all linemen and third among tackles.

And their stars aren’t getting younger. Javon Hargrave, a 29-year-old defensive tackle, was 33rd in PFF’s grades for the position last season. Fletcher Cox, who’s 32, tied for 30th in PFF’s grades of D-tackles.

The Eagles were 25th in pass DVOA but could be higher in 2022 if their secondary ends up coalescing. Darius Slay was a Pro Bowler last year and was fourth in PFF’s grades. Philadelphia also signed James Bradberry to play opposite Slay.

Marcus Epps was graded the 18th-best safety by PFF last year, and Avonte Maddox was tied for 25th among corners.