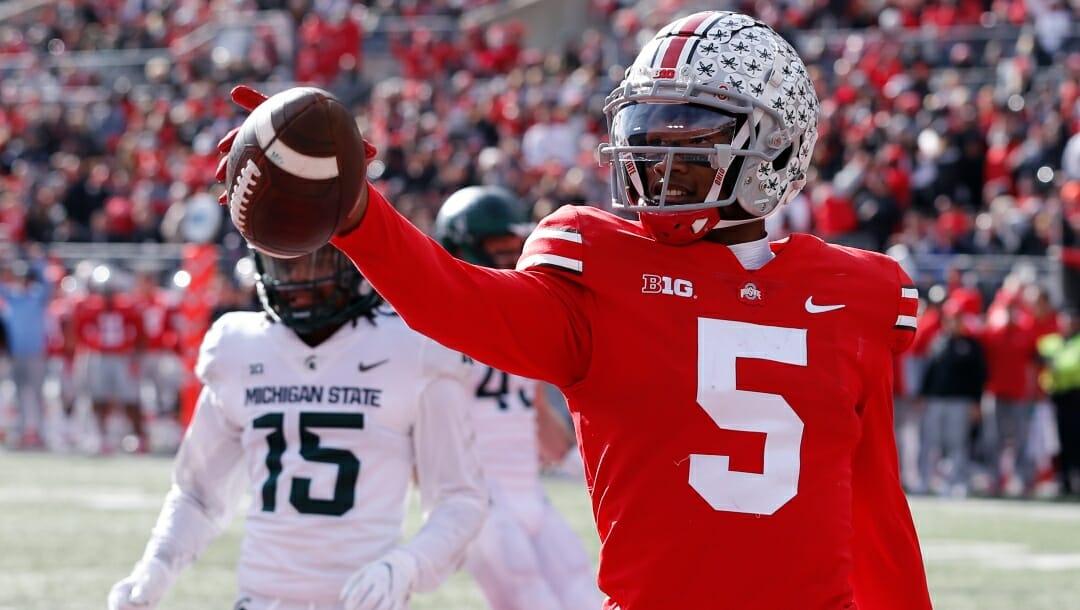 Ohio State needed a yard to convert on fourth down, but Garrett Wilson wanted more.

The Buckeyes wide receiver, who’s the favorite to be taken first in the NFL Draft at his position, was lined up in the middle of three receivers to the left on a fourth-and-1 against Purdue this past season. But Wilson was determined to score.

Wilson ran about four yards, juked out a defender and broke toward the middle of the field. He caught a pass, then cut left and evaded a tackle from defensive back Jamari Brown.

Wilson is elusive. He’s speedy. He’s dynamic. And he may be worthy of a top-20 selection in April.

Wilson is tied for the 17th-best NFL Draft odds to be selected first overall at +20000.

His NFL Draft betting odds of being picked second or third are both +10000. He has the best odds of being the first wide receiver off the board at +110.

Michigan defensive end Aidan Hutchinson has the leading odds to be picked first at -225 as of March 28.

The Baltimore Ravens could use more weapons, and Wilson would blend in well with their offense.

Pro Football Focus ranked the Ravens’ pass offense 21st in the league last year. They were 20th for pass routes yet 13th in pass blocking, indicating former MVP quarterback Lamar Jackson may need the most help at receiver.

Rashod Bateman, a first-round pick a year ago, was Baltimore’s highest-rated wide receiver by Football Outsiders’ DYAR metric at 46th. Marquise Brown, who caught 91 passes on 146 targets for 1,008 yards last year, was next at 81st.

With tight end Mark Andrews, who was first at his position by DYAR last year, the Ravens could unite an explosive offense with running back JK Dobbins returning from injury. Wilson’s knack for racking up yards after catch would present a fascinating aspect to that unit.

After a few years of development, Wilson was at his best last season.

As a junior, Wilson caught 70 passes for 1,058 yards and 12 touchdowns. He also carried the ball four times and rushed for 76 yards and a TD.

That year and the season before, he was an All-American. Wilson added 43 catches for 723 yards and six touchdowns in eight games in 2020, a season which ended in the College Football Playoff national championship. He garnered All-Big Ten honors that year as well.

As a freshman, Wilson caught 30 passes for 432 yards and five TDs.

Wilson has a propensity for dazzling plays.

Like a quarterback who’s commended for making all types of throws, Wilson’s made all types of catches. He’s repeatedly dove for low throws, dragged in passes behind him and earns challenging receptions while keeping his feet in bounds along the sideline.

On a fourth-and-goal on Maryland’s 2-yard line this past season, Wilson stutter-stepped toward the middle of the field. Cornerback Tarheeb Still tried to press Wilson, but he avoided him, hardly touched.

Wilson moved toward the back of the end zone. The second quarterback CJ Stroud caught the shotgun snap, he knew Wilson had an advantage and threw.

Wilson leaped and hauled the ball in. Still tried to push him out of bounds, but Wilson planted both feet inbounds for a score.

Wilson is inconsistent with his hands, though. He could be more crisp in his route running and sometimes falls down as he gets too ahead of himself in routes. His size may also give him problems against more imposing defenders.

But when he does stay upright, he can create separation on short and intermediate concepts and burn defenders deep. He can turn screens into large yardage gains with his speed and cunning stiff-arms and jukes.

When he had the ball in the open field, Wilson displayed balance as he shook off tackles, so losing his feet at other times may be fixable. His quickness also allowed for him to be effective on wide receiver runs like jet sweeps.

When he gained any sort of separation, Wilson was almost guaranteed to make an impressive play. Last season, Wilson sidestepped past a corner in front of him and released to the outside. From there, Wilson was simply faster, and Stroud found him for a long touchdown.

Wilson’s maneuverability should lead to him racking up plenty of yards after the catch in the pros. That is a trait NFL teams will deem greatly valuable.