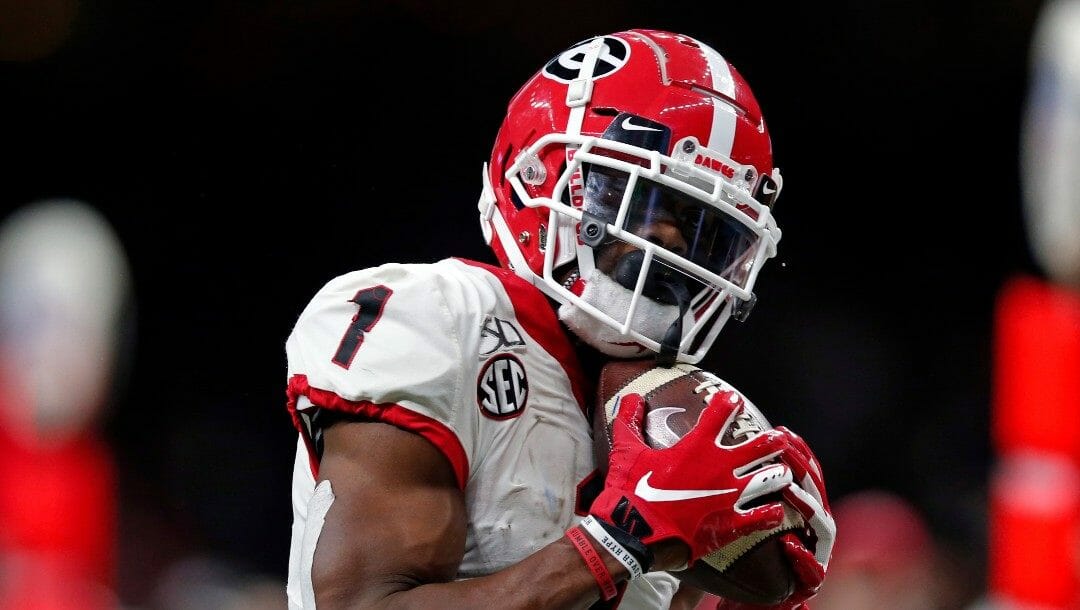 Already having battled through so much, George Pickens fought for one more catch.

After recovering from a torn ACL, Pickens was healthy enough to play once Georgia began competing in the postseason. And the NFL Draft prospect made an impact on the sport’s most crucial stage.

In the first quarter of the College Football Playoff national championship, rival Alabama had taken a 3-0 lead. The Bulldogs responded, though, in part thanks to Pickens.

From behind their own 20-yard line, quarterback Stetson Bennett took a shot deep to Pickens. The wide receiver was fast enough to beat defensive back Kool-Aid McKinstry downfield. He was focused enough to haul the pass in. And he was athletic enough to dive for the 52-yard throw.

Pickens proved he still has the talent worthy of competing in the pros.

Pickens owns the sixth-best NFL Draft odds to be the first receiver selected at +4000.

Michigan defensive end Aidan Hutchinson has the leading NFL Draft betting odds to be picked first at -250 as of April 7.

The Dallas Cowboys may want to address their wide receiver room after trading away Amari Cooper to the Browns this offseason.

CeeDee Lamb is entering his third season in the league after more than 2,000 yards in his first two combined. Plus, Dallas recently re-signed Michael Gallup. So the Cowboys don’t have an immediate need at the position.

They also may look at adding an offensive lineman or think about defense in the first round. However, they were among the top five teams in both those areas last season. They were second in total defensive DVOA and in rushing adjusted line yards while being ninth in adjusted sack rate, according to Football Outsiders.

Their offensive identity with Dak Prescott at quarterback would align with taking a wide receiver like Pickens with the 24th overall pick. He would help them replenish their explosive passing game.

And he was only a freshman. pic.twitter.com/P1JwSYKyMu

Many of Pickens’ career highlights occurred when he was a freshman.

In 2019, he led the Bulldogs with 727 yards and eight touchdowns on 49 catches. A Freshman All-SEC pick, he was the MVP of the Sugar Bowl with 175 yards and a touchdown to go along with 12 receptions, tying a Georgia bowl record.

A season later, he led the team with six touchdowns through the air. He added 513 yards and 36 catches.

Pickens played the final four games of his last college season as the Bulldogs went on to advance to the national title. A preseason All-American, he ended the year with 107 yards and five catches.

Pickens is arguably the best receiver in this year’s class when the ball is in the air.

His frame helps with that. At 6-foot-3, 195 pounds, and arms at 32 ⅜ inches, Pickens has the length alone to win contested catches.

But he also possesses the athleticism and instinct to high-point passes even against the best cornerbacks. Pickens had a 33-inch vertical and broad jump of 10 feet, 5 inches, at the NFL Combine.

Against South Carolina in 2019, Georgia was dealing with a third-and-3 trailing 17-10 late in the third quarter. Pickens met cornerback Israel Mukuamu a couple yards beyond the line of scrimmage and then released to the outside.

Pickens used his long arms to maintain separation as he cut back about 5 yards beyond the line of scrimmage. His quarterback trusted him and threw the ball before that move even happened. Pickens made good on that, moving back toward the ball and hauling in the reception.

Pickens is also faster than players at his height may be. In the 40-yard dash, Pickens clocked in at 4.47 seconds. And that quickness is evident on tape.

On a first-and-goal at Tennessee in 2019, Pickens was out wide. He crossed in front of his teammate in the slot to begin the route.

Then he quickly cut toward the sideline in the midst of the end zone. A defender was drawn toward covering the slot receiver on the shallower route, and Pickens was too fast for anyone else to keep up. He was open for a touchdown.

WHAT. A. GRAB. 😱@GeorgiaFootball's George Pickens is a PROBLEM! pic.twitter.com/jyeW9xLQm6

His route-running was inconsistent, though. He at times showed good footwork and used his long strides to his advantage, and on others his breaks weren’t as crisp as they could be.

But when he’s on-point, he’ll be open in the NFL. With any sort of separation, he can find his way to the end zone.

At Arkansas in 2020, Georgia was down by five points and had a second-and-goal from the 20. Pickens was on the outside to the left.

With a comeback route, he found some room to receive the ensuing pass. Once he had the ball, he turned up field and dove for the goal line from about 3 yards out.