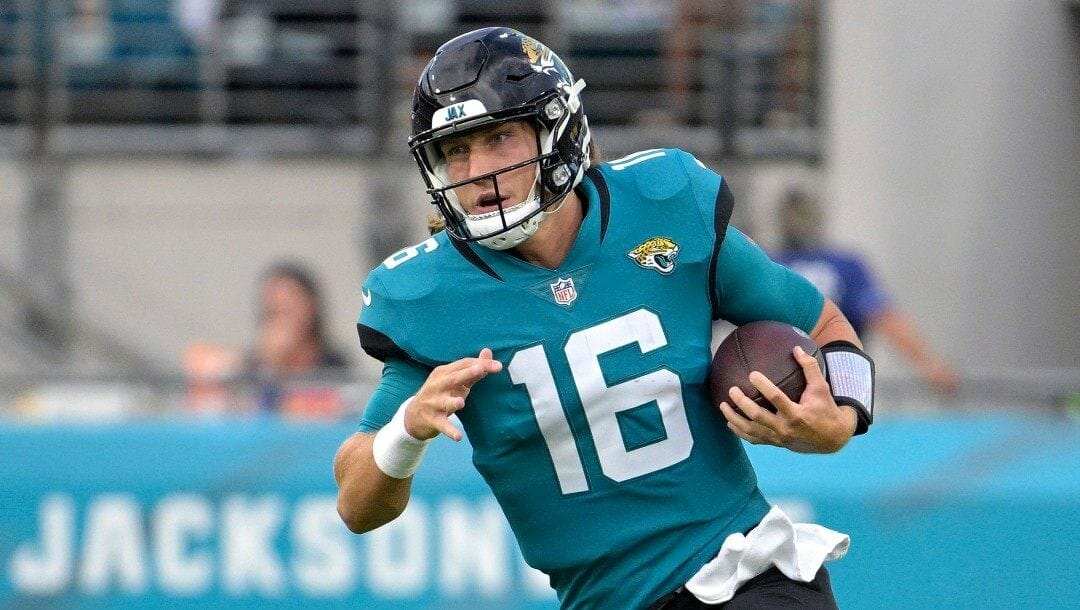 Following last year’s Urban Meyer debacle, the Jacksonville Jaguars enter 2022 under new leadership, and with that, a renewed sense of optimism that brighter days are ahead. They have much better NFL playoff odds than a year ago.

"It's been great. I think just the way he communicates." #Jaguars | #DUUUVAL | #NFLTrainingCamp pic.twitter.com/gNsKiX0AKz

Hoping to expedite their rebuild, the Jags spent the most of any organization during free agency. Jacksonville also selected talented linebacker/pass rusher Travon Walker, with the No. 1 overall pick in April’s draft, adding some much-needed athleticism on defense.

While they are likely a few years away from contending for a playoff spot, the Jags should be more competitive in 2022.

With that said, here is a look at Jacksonville’s regular season schedule.

The Doug Pederson era officially begins with a matchup against the Washington Commanders and their new quarterback Carson Wentz. Pederson is all too familiar with Wentz, having coached the former No. 2 overall pick for five seasons during the pair’s time together in Philadelphia.

The Jags do not have an excellent track record playing on the West Coast, losing 11 of their past 12 games. Things won’t get easier in 2022 against superstar quarterback Justin Herbert and an explosive Chargers offense.

Doug Pederson returns to the City of Brotherly Love. Pederson coached the Eagles from 2016-20, leading the team to a victory in Super Bowl LII. He should receive a warm reception.

The Texans have had the Jags’ number, winning the past eight meetings. Can Jacksonville finally put an end to the skid?

The second and final meeting with the Colts comes relatively early in Jacksonville’s schedule. The Jags are 0-4 in their last four trips to Indy.

Jacksonville hosts a New York Giants team that is not lacking talent and should be much improved following the hiring of former Buffalo Bills offensive coordinator Brian Daboll as head coach.

The Jags battle Russell Wilson and the new-look Denver Broncos in London. Jacksonville won on a last-second field goal in last year’s trip across the pond, edging the Miami Dolphins 23-20 and ending the second-longest losing streak in NFL history.

Jacksonville gets its first look at star wide receiver Davante Adams in a Raiders uniform. Las Vegas acquired Adams in an offseason trade with the Green Bay Packers.

The Jags head into their bye with a tough matchup against Patrick Mahomes and the Kansas City Chiefs. Mahomes will likely have KC’s post-Tyreek Hill offense humming along by this point in the season.

Ravaged by injuries last season, Lamar Jackson and Co. are widely expected to return to the upper echelon of the AFC.

The first of two matchups against the reigning AFC South champs.

Titans superstar running back Derrick Henry has owned the Jags, rushing for 1,143 yards and scoring 15 touchdowns in 11 career games vs. Jacksonville.

Jacksonville hosts America’s Team for the first time since 2006. The two sides last met in 2018, with the Cowboys walking away with a convincing 40-7 home victory.

While both teams will likely be out of the playoff hunt, a matchup between young quarterbacks Trevor Lawrence and Zach Wilson remains intriguing. The Jets downed the Jags 26-21 last season.

The Jags ring in the New Year with the second and final meeting against the Texans, a game that will likely carry significant draft implications.

Jacksonville closes things out with a return engagement against the Titans, who will likely be fighting for playoff seeding in the AFC. Tennessee has won four of the last five meetings in Jacksonville.