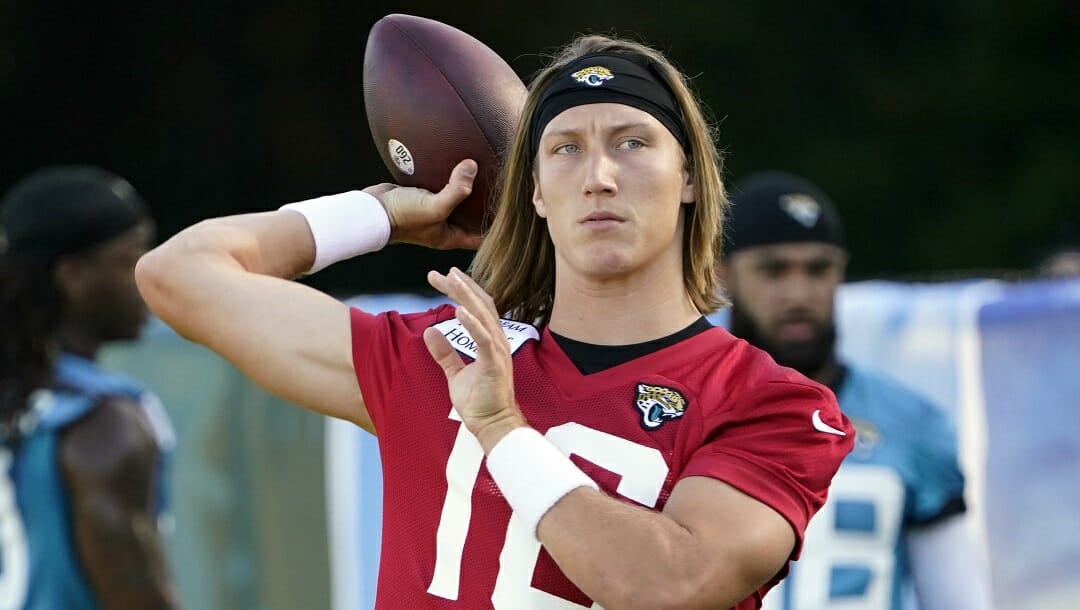 With Doug Pederson stepping in as head coach and former No. 1 overall pick Trevor Lawrence getting a full year of pro experience, the Jaguars could be in line for more wins this season.

Here’s a position-by-position look at the Jaguars, whose NFL odds to win the Super Bowl are +15000.

The Jaguars didn’t experience a swath of success last season as a team. But something they should take solace in is that Lawrence was great in many ways in 2021.

But numbers won’t bear that out. He was 32nd in DYAR and 29th in DVOA last season.

Nonetheless, Lawrence showed great poise in his decision-making and has the physical ability to thrive. With another year in the league and a new coaching staff, Lawrence should take a major step forward, whether or not his team does as well.

2021 #Jaguars stats: While Trevor Lawrence was 7th in total pressures faced and second in times hit as throwing, he was tied for 20th in # of sacks taken @PFF

James Robinson was 6th in DVOA and 7th in DYAR. He's expected to be the backup for Travis Etienne @fboutsiders

The Jaguars’ running back group featuring Travis Etienne Jr. and James Robinson is ranked No. 24 for the upcoming 2022 NFL season, with an overall grade of 56/100.

With Etienne recovering from an injury and Robinson both as backfield options, the Jaguars aren’t in a bad spot.

Robinson wasn’t as utilized as he could’ve been, but he was still seventh in DYAR and sixth in DVOA last year. Etienne was a 2021 first-round pick out of Clemson with a chance to prove what he’s capable of as a pro.

The Jaguars’ wide receiver and tight end group featuring Christian Kirk and Marvin Jones is ranked No. 29 for the upcoming 2022 NFL season, with an overall grade of 59/100.

While the Jaguars may have overspent on him, Kirk will provide a boost to this position group. He had an impressive 2021 as he was eighth in DVOA, ninth in DYAR and 20th with 1,069 effective yards.

Jamal Agnew, Zay Jones, Laviska Shenault and Laquon Treadwell all could compete for targets, but none were better than 35th in DYAR or DVOA last year. Evan Engram was added at tight end but wasn’t in the top 50 for his position in DVOA or DYAR last season for the Giants.

The Jaguars were undoubtedly solid up front, finishing 10th in adjusted sack rate and 13th in adjusted line yards. They return three primary starters from that unit.

Jacksonville also added Brandon Scherff, who was tied for 13th among guards in PFF’s grades with Washington. In addition, the Jaguars drafted Luke Fortner in the third round and is projected as their starting center.

The Jaguars were 23rd in adjusted line yards and 27th in adjusted sack rate. Their pass rush was 25th and their run defense was 29th in PFF’s grades.

The Jaguars had the second-worst pass defense DVOA last season. Shaquill Griffin, a former Pro Bowler, had the 21st-best grade at his position via PFF.

Darious Williams tied for 73rd in those grades among cornerbacks. Rayshawn Jenkins tied for 79th among safeties in PFF’s grades.