Jalen Hurts Shoulder Injury: Everything You Need to Know 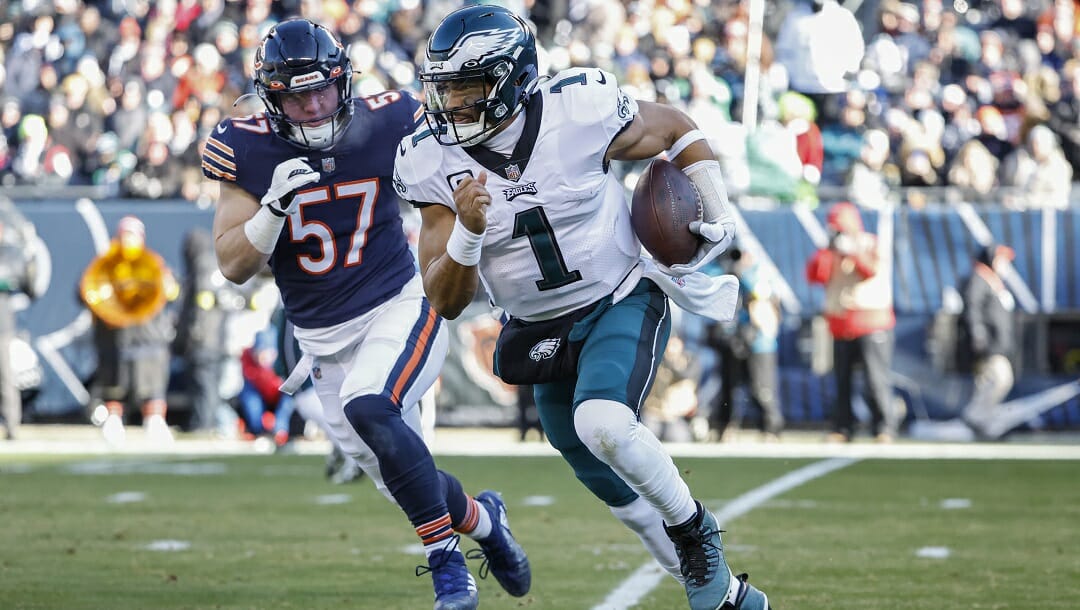 The NFL betting community got a big collective shock on Monday afternoon when news broke that Philadelphia Eagles quarterback Jalen Hurts suffered a mild injury during his Week 15 win over the Chicago Bears.

The Eagles are on track for the No. 1 seed in the NFC Playoffs, and Jalen Hurts was the favorite to win NFL MVP.

Now, football fans are reevaluating everything they thought they knew about a key Super Bowl odds contender.

Yes, it appears that he is. According to multiple reports that surfaced on Monday afternoon, Jalen Hurts was hurt during his Week 15 win over the Chicago Bears, and his status for a divisional showdown with the Cowboys is now in doubt.

What Happened to Jalen Hurts?

Jalen Hurts sprained his right (throwing) shoulder in Chicago during a third-quarter scramble, according to MRIs taken after the game.

This is the play on which Jalen Hurts sprained his shoulder. He got X-rays after the game, as reported by @JimmyKempski. pic.twitter.com/SBZOlSCTcl

Sprained shoulder recoveries can vary depending on how bad the sprain is. For milder injuries like a Grade 1 sprain, recovery may only be a week or two of rest; for more severe sprains, full recovery could take up to eight weeks.

It’s still very early in the week, but early reporting has suggested that Hurts could miss 1-2 weeks’ worth of games.

While that wouldn’t necessarily impact the Eagles’ season-long goals, it would hold him out for a critical NFC East game against the Dallas Cowboys on Christmas Eve.

Jalen Hurts also missed some time at the very end of last year’s regular season – including a divisional game against the Cowboys – because of an injury.

Last year, it was Hurts’ ankle, which he had surgically repaired in February 2022.

Gardner Minshew, the mustachioed man, is the Eagles’ backup quarterback behind Jalen Hurts.

If Hurts can’t go against the Cowboys on Saturday, Minshew will step in as a proven, capable backup.

Jalen Hurts had become the betting favorite in the NFL odds market for regular season MVP. He was -145 at the BetMGM online sportsbook on Monday morning following the Week 15 games.

With news of Hurts’ injury and potential to miss time, the market was adjusted. Patrick Mahomes became a -300 favorite, with Hurts tied with Josh Allen and Joe Burrow at second in the table with a +550 price.

Given the dramatic price drop, it’s fair to assume that Hurts is unlikely to play this week – or, at the very least, that he will be far less effective on the field over the final weeks of the season than he was for most of the first three months.

Like Hurts’ MVP odds, there was a pretty dramatic change in the odds market for Saturday’s highly anticipated Cowboys vs. Eagles matchup.

Dallas, which opened as a 1.5-point favorite, is now a 6-point home favorite over the NFC’s No. 1 seed. That’s 4.5 points of line movement in just a matter of hours.

With Jalen Hurts' status up in the air, Saturday's game saw a 4.5-point swing on @BetMGM.#FlyEaglesFly | #DallasCowboys pic.twitter.com/bhpclxZo5h

This Jalen Hurts injury news is obviously a huge ripple at the top of the NFC market that was mostly settled, in the eyes of many analysts and online sports bettors.

For up-to-date information on the Hurts injury, odds movement for Eagles vs. Cowboys, NFL odds and more, make sure you subscribe to The Lion’s Edge for intelligent, weekly insights into trends and betting tips across the online sports betting world.

It’s available on iTunes, Spotify, or wherever you listen to podcasts.

From basketball odds – like NBA odds and college basketball moneylines – and NFL odds to live sports betting and parlays, BetMGM has odds for everyone.

Is Sports Betting Legal in Pennsylvania

Yes, sports betting is legal in the Keystone State.

How To Bet Online in Pennsylvania

It’s never been easier to bet online in Pennsylvania.

Check out the sportsbook today for all available betting odds in Pennsylvania!