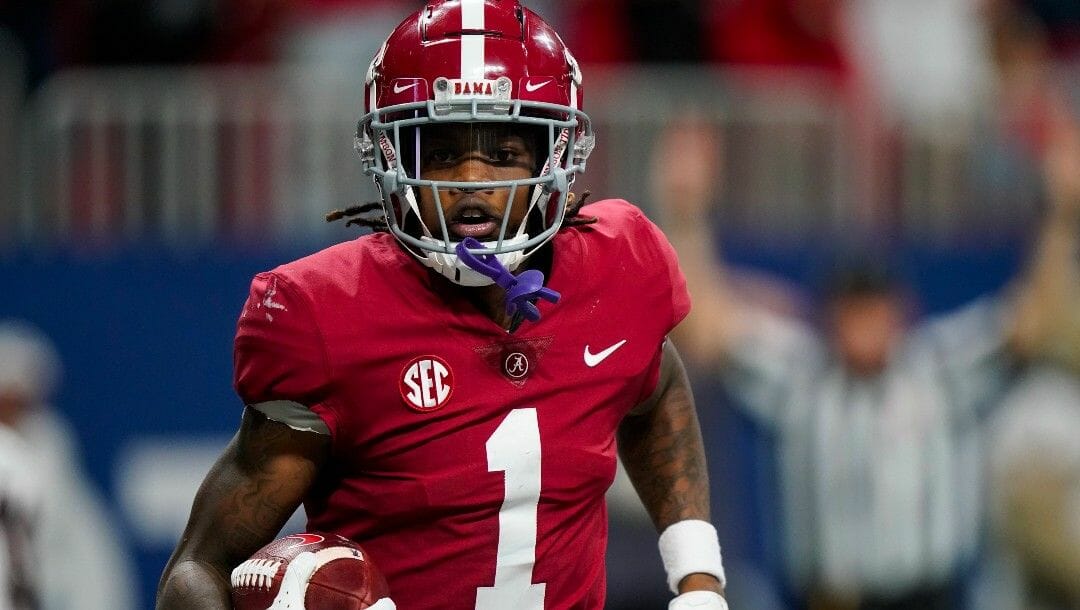 The Alabama wide receiver, who’s one of the most skilled prospects in this year’s NFL Draft, was across the line of scrimmage from Georgia cornerback Kelee Ringo. Williams pumped his feet at the line, using that moment of hesitation to break away from press coverage.

Williams ran a stop-and-go. About 12 yards beyond the line of scrimmage, he stuttered and dipped his head, pretending he was going to break another way. Ringo was forced to break stride, losing momentum.

By then, it was over. Williams was too fast. He was on his way to a 55-yard touchdown in last year’s SEC Championship.

Even in the NFL, Williams will be difficult to keep up with.

Williams has the third-best NFL Draft odds to be the first wide receiver selected at +700.

Michigan defensive end Aidan Hutchinson has the leading NFL Draft betting odds to be picked first at -250 as of April 4.

The Kansas City Chiefs would be an ideal landing spot for Williams.

The Chiefs recently subtracted speedy receiver Tyreek Hill in a trade with the Dolphins. He was an integral part of their offense.

Hill’s explosiveness forced defenses to play honestly, opening up opportunities for others. Hill also returned kicks, which Williams can do, too.

The Chiefs have addressed this position group by signing former Pro Bowl wideout JuJu Smith-Schuster and former Packer Marquez Valdes-Scantling. Still, Williams would be a substantial boost. And with these recent additions, the Chiefs could be patient with Williams as he heals from an injury.

The Chiefs, who pick No. 29 overall, will likely need to trade up to get him, so they could swap picks with the New England Patriots at No. 21 to acquire Williams.

Williams transferred to Alabama following his sophomore season in 2020, and it turned out to be a beneficial decision.

In 2021 he was a first-team All-American as well as an All-SEC first-teamer and the co-conference special teams player of the year. He was a finalist for the Biletnikoff Award, which goes to the best receiver in the country.

He totaled 1,572 receiving yards, which was fifth in the country and first in the SEC, as well as 15 receiving touchdowns, which were third and first, respectively. He’s third on Alabama’s single-season receiving yards list behind DeVonta Smith and Amari Cooper.

He accumulated 1,947 all-purpose yards, which was fourth in the nation, as he tied for second in the country with two kickoff returns for touchdowns. He also made an impact on other special teams like punt coverage.

In two years at Ohio State, Williams played 22 games and made six starts. He racked up 266 yards and 3 touchdowns on 15 catches.

Williams has elite downfield speed. And he knows exactly how to use it to his advantage.

He alters his pace on any given route. Again and again, this kept cornerbacks and safeties guessing. Often, they were left flat-footed on his breaks as they waited to see where he would go. He can also shed tackles in the open field.

In a matchup with Texas A&M last season, Alabama was down 31-17 and was 29 yards from the end zone. Williams was one-on-one on the outside with defensive back Tyreek Chappell.

When the Crimson Tide receiver cut inside for a split second, Chappell took the bait. An instant later, Williams was a step ahead going downfield, leading to an Alabama touchdown.

Williams is fast enough to gain a substantial cushion out of his break. Not only can he win 40-yard races, but he’s also quick and can ramp up to full speed in a hurry.

At 6-foot-2, Williams is lanky, and he uses his long strides to gain momentum in a short amount of time. This helps him, particularly on short routes and screens, where he was nearly impossible to track down.

In that Georgia game, the Crimson Tide were dealing with a third-and-2 on their own 32. Early in the second quarter, the Bulldogs were ahead 10-0.

Williams was the front and middle of three receivers bunched together to the right. He ran straight upfield, as if he were running a go route, then turned behind a defender and identified a soft spot in the middle of the defense.

Quarterback Bryce Young found him about 15 yards downfield. With that much space, Williams had all he needed to cruise all the way to the end zone.

At 189 pounds, Williams’ lack of size does lead to him occasionally struggling on run blocks and against press coverage. Florida’s Kaiir Elam, for example, did see some success against him because of it.

Williams’s ACL was torn in the College Football Playoff national championship in January, which is another concern. He said he was ahead of his 5-7 month recovery schedule.

When he’s healthy, he has a strong chance of being a formidable threat to NFL defenses.