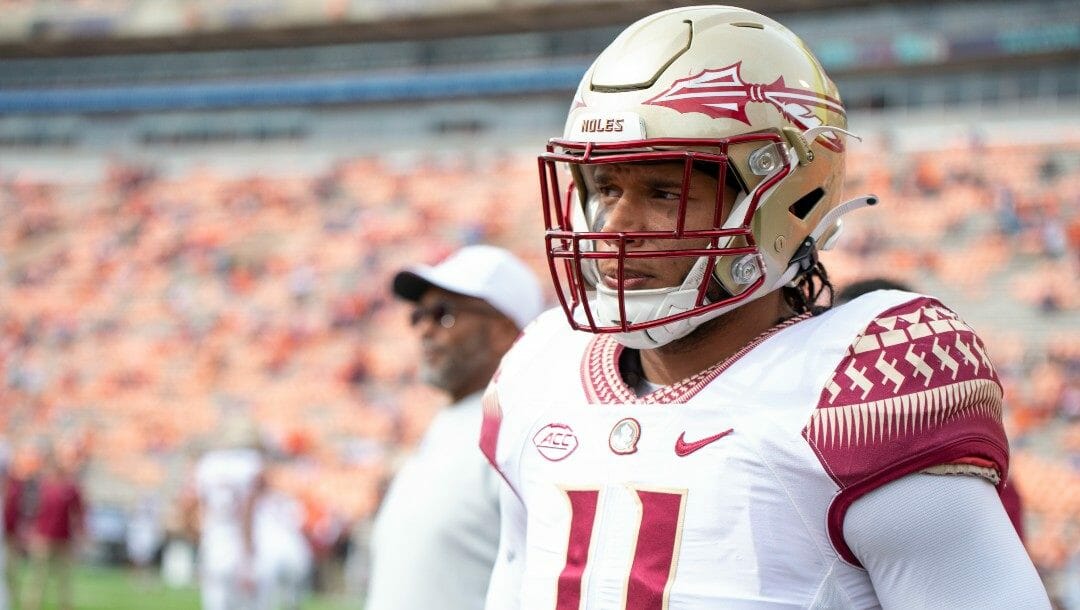 When opponents don’t account for Jermaine Johnson II, they usually end up suffering for it.

Notre Dame thought it could avoid the Florida State defensive end, one of the top pass rushers in this year’s NFL Draft, with clever play design and speed. But Johnson was better than that.

Running back Chris Tyree caught the ball on a jet sweep and ran to the right side. Offensive linemen moved past Johnson, and Tyree hoped to beat him to the edge.

No chance. Johnson wrapped up the ball carrier 5 yards in the backfield.

Johnson is a disruptive force and may continue to be one as a professional.

Johnson is tied for the ninth-best NFL Draft odds to be selected third overall at +3000.

Michigan defensive end Aidan Hutchinson has the leading NFL Draft betting odds to be picked first at -250 as of April 6.

The Tampa Bay Buccaneers would benefit greatly by keeping Johnson in Florida.

The Buccaneers were 11th in run defense and 27th in pass-rushing last season, via Pro Football Focus. Their rush DVOA, according to Football Outsiders, was 12th while their pass DVOA was 10th.

The Bucs already have one of the best offenses in the NFL with Tom Brady returning and Pro Bowl-caliber wide receivers. With defensive coordinator Todd Bowles being promoted to head coach, he may want to improve that side of the ball.

Johnson may not fall to the 27th pick in the draft. But if he does, Tampa Bay shouldn’t hesitate to pick him up.

Before last season, Johnson played at Georgia but struggled to reach the starting lineup. Transferring to Florida State provided him a chance to shine.

Johnson was the ACC Defensive Player of the Year, the first to do so in one’s first season in the conference. He was also a first-team All-American and All-ACC selection, as well as a finalist for the Ted Hendricks Award, which goes to the country’s premier defensive end.

In 12 starts, Johnson tallied 70 tackles, 18 for loss, with two forced fumbles and a fumble recovery which he returned for a touchdown. He was disruptive for opposing quarterbacks, totaling 12 sacks, 12 hurries and two pass breakups.

Jermaine Johnson gets the ultimate seal of approval 🏹@FSUFootball pic.twitter.com/kHwpIt01R3

His sack total was first in the ACC and sixth in the country. His TFL number was first and eighth, respectively. He paced Power Five defensive linemen in tackles as well.

In 21 games at Georgia, Johnson tallied 36 tackles, eight for loss, to go with 24 QB pressures, 7.5 sacks, two pass breakups and a forced fumble.

Johnson’s first step after the snap is powerful, and he blends his attack with speed well. This is the ferocious defender’s greatest asset when approaching offensive linemen.

At the NFL Combine, his broad jump of 10 feet, 5 inches, tied for fourth among defensive ends. He was also eighth with a 4.58-second 40-yard dash.

As proven against Notre Dame, he has more than enough speed to track down ball carriers. His discipline also makes him stand out on run defense.

Out of a four-point, three-point, or two-point stance, he maintains his gap or sets the edge, not sacrificing his responsibilities in the hopes of making an explosive play. At 6-foot-5, 254 pounds with 34-inch arms, he used his length to gain separation and his height to constantly keep his eyes in the backfield and not lose track of the ball.

In a matchup with Jacksonville State, Johnson began a play by pushing back the right tackle toward the middle of the field. When running back Pat Jackson tried to bounce to the outside, Johnson recognized it, spun off of the tackle and threw Jackson to the ground.

Johnson wasn’t overly consistent. He sometimes got ahead of himself and tried using too many moves on a single snap, which led to opponents blocking him fairly easily.

Johnson possesses an expansive arsenal of moves, though. In college, he didn’t have to win with more than his phenomenal bull rush and hand swipes.

He also showed superior footwork, as he could manipulate tackles with a quick jab step one way and then go another in a flash. He gave NC State tackle Ikem Ekwonu issues with his quick hands and feet.

Jermaine Johnson is the only guy that Ekwonu struggled to handle this year. Though then again, *everyone* struggled with Johnson so it's not really a red flag to me.

Both should go top 10 imo. pic.twitter.com/6wSg2DGxVy

Against North Carolina, Johnson began the play on the right edge with his hand in the dirt. He swatted left tackle Asim Richards’ arms away and defeated him around the edge. A running back tried to help out, but when quarterback Sam Howell began to climb the pocket, Johnson evaded both blockers and sacked the passer.

Johnson has the traits necessary to become an extraordinary NFL defender.