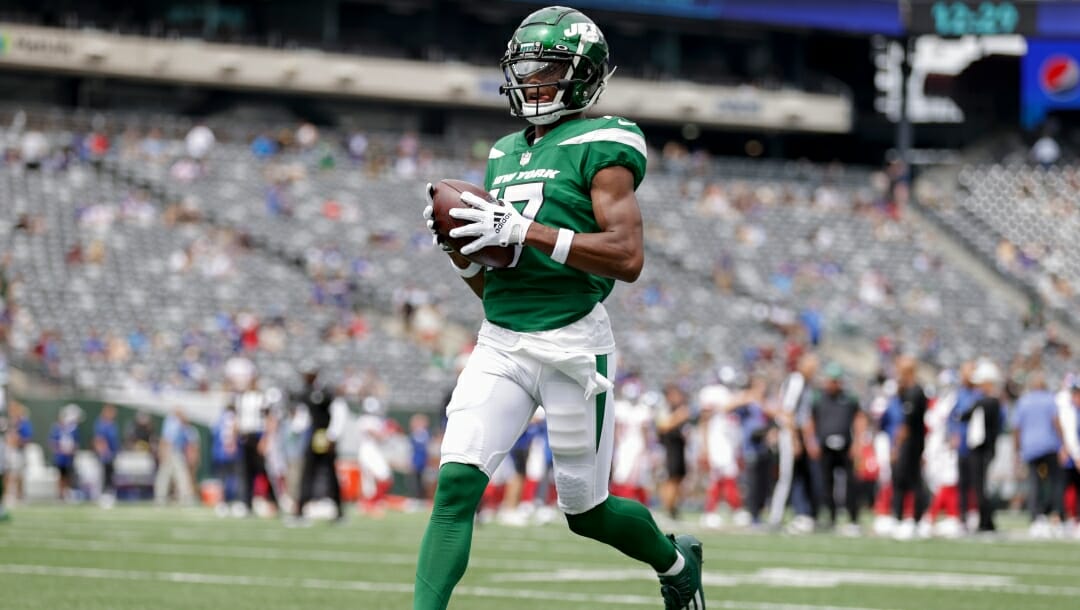 While the Jets did add a few potential stars in this year’s draft, they still may be a year or two away from enjoying a winning season.

Here’s a position-by-position look at the Jets, whose NFL odds to win the Super Bowl are +15000.

2021 #Jets stats: The Jets were no better than 15th in rush, pass and total DVOA on either offense or defense @fboutsiders

Wilson was highly touted out of BYU, which made him the second overall pick a year ago. He has a strong arm to go with impressive athleticism. But last season was not the best, as he was 34th in both DYAR and DVOA.

Wilson should be better than he was as a rookie. While his health is still unclear, Joe Flacco will take the field if Wilson is unable to.

The Jets’ running back group featuring Breece Hall and Michael Carter is ranked No. 19 for the upcoming 2022 NFL season, with an overall grade of 66/100.

Many regarded Hall as the best running back in the 2022 class out of Iowa State. Defenses will have to plan for the many ways he can impact a game.

At his position, he’s joined by Carter, a fourth-round draft pick in 2021. He was 22nd in DYAR and 21st in DVOA last season and may have more chances to shine.

The Jets’ wide receiver and tight end group featuring Garrett Wilson, Elijah Moore and CJ Uzomah is ranked No. 22 for the upcoming 2022 NFL season, with an overall grade of 69/100.

The Jets have some potential in their receiving corp. They drafted Wilson, one of the most intriguing prospects in this year’s draft, 10th overall.

Moore also enters his second season after 538 yards, 43 receptions and five touchdowns in 11 games. Corey Davis caught 34 passes for 492 yards and four touchdowns in nine games last year. They also signed Uzomah, who was 10th in DYAR and 12th in DVOA last season with the Bengals, likely as a starting tight end.

The Jets could outperform their 2021 season for a few reasons. First, they were 22nd in adjusted line yards and 28th in adjusted sack rate.

Alijah Vera-Tucker was graded in a tie for 40th among guards. Connor McGovern was ninth at his position in PFF’s grades.

The Jets’ pass rush was graded 23rd by PFF, while their run defense was 30th. Their adjusted line yards were 21st, and their adjusted sack rate was 22nd.

Many of the Jets’ contributors from last year are back. That includes Quinnen Williams, who was tied for 40th among interior defensive linemen in PFF’s grades, the highest on the team.

Carl Lawson hasn’t played since signing his three-year, $45 million deal after a ruptured Achilles a year ago. John Franklin-Myers was 16th in PFF’s grades among edge rushers. The Jets did trade up for Jermaine Johnson II in the first round of this year’s draft.

The Jets were last in pass DVOA last year. But they helped themselves through some offseason additions.

They picked up D.J. Reed, the ninth-highest graded cornerback by PFF last year with the Seahawks, and Jordan Whitehead, the 28th-highest graded safety with Tampa Bay. They also drafted Sauce Gardner fourth overall.

The Jets also hope to be boosted by Lamarcus Joyner, who played just one game in 2021 after a triceps injury.