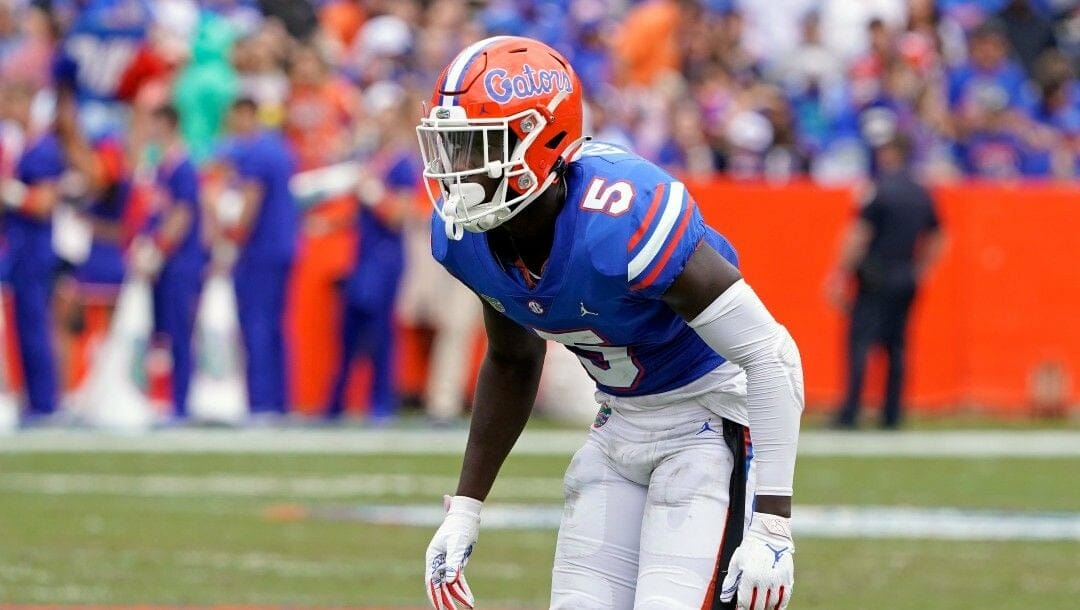 On a shot downfield, Kaiir Elam was a nuisance for Alabama.

The Florida cornerback, one of the top players at his position in the NFL Draft, was matched up with Jameson Williams, another pro prospect. The wide receiver stutter-stepped then cruised downfield.

But Elam was with him the whole way. He was physical, keeping Williams contained along the sideline.

By the time the play was over, Williams was on the ground, and the pass fell incomplete. Elam’s mission was accomplished.

Because of his coverage skills, Elam may limit NFL wideouts in the same capacity.

Elam is tied for the fifth-best NFL Draft odds to be the first cornerback taken at +8000, and his odds of being selected first overall are +30000.

Michigan defensive end Aidan Hutchinson has the leading NFL Draft betting odds to be picked first at -250 as of April 1.

The Cincinnati Bengals need help in their secondary, and Elam would give them the boost they need with the 31st pick.

The Bengals were 24th in pass DVOA a year ago, according to Football Outsiders. Chidobe Awuzie was Pro Football Focus’ best-ranked cornerback last year at 23rd.

The Bengals could address their offensive line woes which were consistently problematic a year ago. However, they’ve already made key free-agent additions, including tackle La’el Collins.

This allows Cincinnati, which nearly won the Super Bowl last season, the chance to improve its secondary. Elam’s strengths would mesh well with that unit.

In 12 games, he totaled 39 tackles, one for loss, with two interceptions and 11 pass breakups with a fumble recovery. He was an All-SEC first-team pick and a semifinalist for the Jim Thorpe Award, which goes to the best defensive back in college football.

In 2019, he chipped in 11 tackles with three picks and four passes defended. He was on the all-conference freshman team.

He finished 2021, his final year of college, with another interception and five pass breakups. He accumulated 29 tackles with 1.5 for loss as well.

Elam is flat-out superb when he’s covering a receiver and the ball is in the air. He knows exactly how to contest catches and make things difficult, if not impossible, for wide receivers.

He’s fast and fluid when he drops back. That makes him difficult to lose on a lot of routes.

In that Alabama game this past year, the Crimson Tide had three receivers to the left, and Williams to the right. Elam was lined up in front of him, and Alabama liked that matchup.

Quarterback Bryce Young looked toward Williams’ side immediately after the snap. But Elam moved in lockstep with the receiver. Williams broke back toward the pass about five yards beyond the line of scrimmage, yet Elam was there to bat the ball away.

Elam may need to improve in run support. His tackling technique is inconsistent and he takes bad pursuit angles.

However, he’s physical, especially when he’s pressing receivers at the line. He loves to quickly push them with his hands before he begins trailing them.

With a 4.39-second 40-yard dash at 6-foot-1.5 and 191 pounds at the NFL Combine, he has impressive speed. But he seemingly plays even faster, especially when he needs to recover and close in on a receiver who gained a cushion on him.

This allows him to thrive in press coverage. He isn’t often fooled by double moves or nifty footwork from opponents. He also possesses the awareness and knowledge to play in zone as well.

In the 2019 Orange Bowl, Virginia faced a third-and-7 in the fourth quarter and was within striking distance of reaching the end zone. Elam, then a freshman, made sure that didn’t happen.

Near the right sideline, Elam focused on the pass when it traveled his way, keeping a hand on his receiver so as to not lose track of his opponent. Elam lept for the ball. Though he was being shoved, he snagged it and remained in bounds for a pick.

Elam is capable of making those types of plays in the NFL.