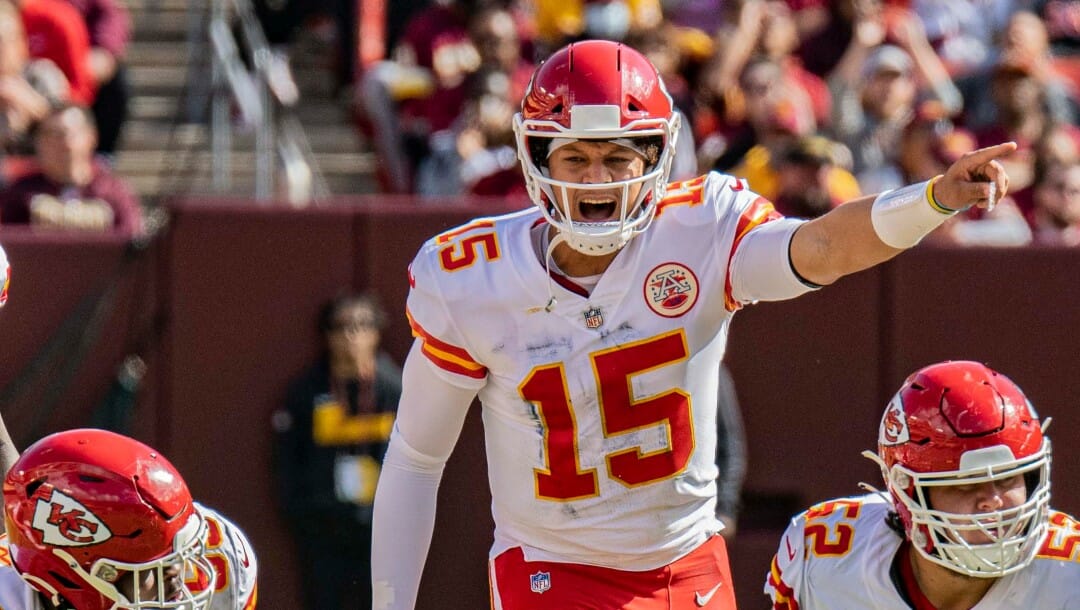 Following last year’s stunning loss in the AFC Championship Game, the Kansas City Chiefs enter 2022 facing the reality of a re-loaded AFC West and the league’s fifth-most difficult schedule (based on opponents’ 2021 winning percentage). They have NFL odds of +1000 to win the Super Bowl.

Of course, the central talking point heading into the season is how the Chiefs offense will look without All-Pro wide receiver Tyreek Hill, who was traded to the Miami Dolphins after contract negotiations broke down. While superstar quarterback Patrick Mahomes is undoubtedly capable of lifting the play of those around him, Hill’s game-breaking ability is nearly impossible to replace.

Mahomes’s brilliance should allow KC to put up a fair amount of points, but his absence will be noticeable.

#chiefs HC Andy Reid sat down with us on @nflnetwork. He had a really interesting comment on Patrick Mahomes. How his QBs love of teaching allowed this offense to take a greater step than expected this offseason when he worked privately with the WRs. That and more right here👇👇 pic.twitter.com/iZi1udiqJD

Here’s how the Chiefs’ 2022 regular season schedule shakes out.

The Cardinals will be without star wideout DeAndre Hopkins, who is suspended for the first six games due to a violation of the league’s substance abuse policy.

Kansas City’s home opener is a primetime showdown against Justin Herbert and the Los Angeles Chargers, who upset the Chiefs 30-24 on the road in Week 3 of last season.

The Colts head into 2022 with another new face under center in former Atlanta Falcons legend Matt Ryan. However, stopping star running back Jonathan Taylor will be KC’s primary focus after the 23-year-old scampered to a league-high 1,811 yards and 20 touchdowns last season.

It’s a rematch of Super Bowl LV on Sunday Night Football as Mahomes and the Chiefs travel to Tampa Bay to face Tom Brady and the Buccaneers. KC will likely put up more than the nine points they scored in that contest.

KC dominated the two meetings last season, outscoring the Raiders 89-23. However, Las Vegas did add some defensive help in All-Pro edge rusher Chandler Jones and should be far more explosive on offense with the additions of star wideout Davante Adams and head coach Josh McDaniels.

Perhaps the NFL’s most highly-anticipated matchup of the season, the Chiefs battle the Bills in a rematch of last year’s AFC divisional round, one of the greatest games in league history.

The Chiefs square off with the 49ers for the first time since the two sides met in Super Bowl LIV, a 31-20 KC victory.

Kansas City returns from its bye week with a matchup against Derrick Henry and the reigning AFC South champs, who blew out the Chiefs 27-3 in their lone meeting last season. Chiefs head coach Andy Reid is a stellar 20-3 coming off a bye.

The Jags should be far more competent under new head coach Doug Pederson. That said, KC likely takes care of business easily in this one.

The Chiefs downed the Chargers on the road 34-28 in overtime last season. A potential sweep would go a long way in capturing yet another AFC West crown.

Most people remember the last time these two sides met, a 54-51 Rams victory in a Monday Night Football classic (Nov. 19, 2018). While it’s safe to assume the scoring won’t be as high this time, points should still be plentiful.

Mahomes and Co. will look to avenge last season’s devastating loss to the Bengals in the AFC Championship Game, only this time on the road.

The Chiefs get their first look at Russell Wilson in a Denver Broncos uniform in what will likely be a crucial AFC West primetime affair.

The first of two consecutive favorable matchups see Mahomes return to his home state to battle the Texans. Expect a big-time showing from the former league MVP.

Kansas City is handed an early Christmas present with a matchup against the lowly Seahawks. Seattle fans will likely be hiding inside their stockings after this one.

The Chiefs ring in the New Year with a return engagement against the Broncos, a matchup that could determine AFC West supremacy.

Numerous scenarios could be in play for both teams in KC’s regular-season finale, setting up a potentially intriguing finish.