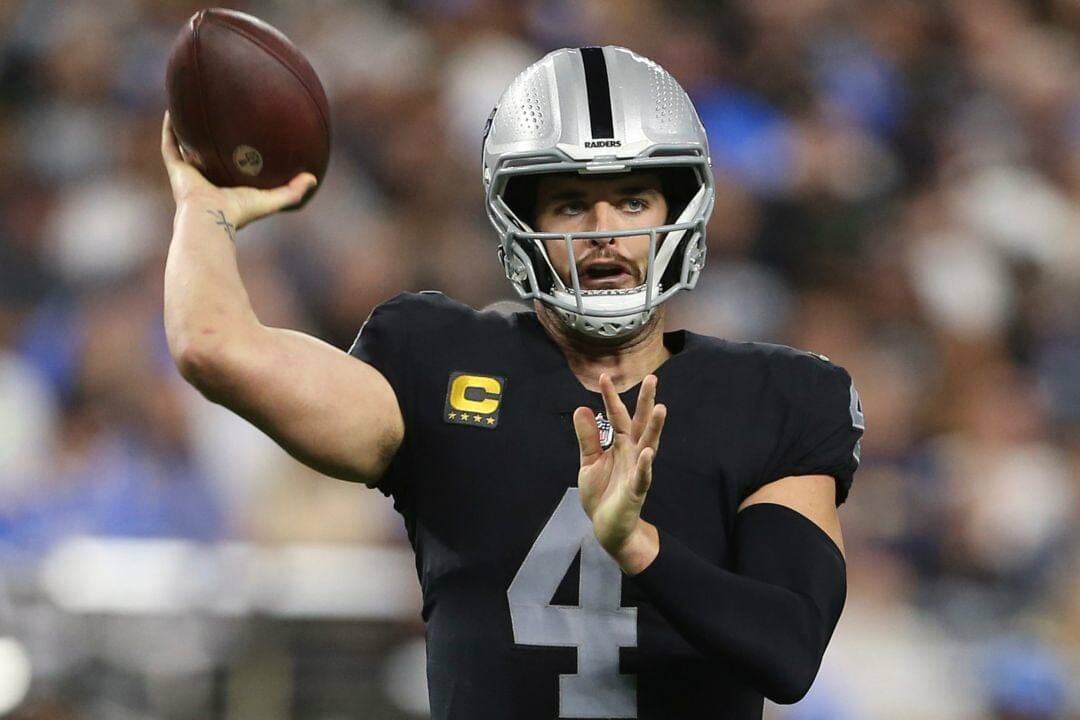 Last season saw the Las Vegas Raiders secure a playoff berth for the third time in the previous 20 years, where they ultimately fell in the Wild Card round to the eventual AFC Champion Cincinnati Bengals. Entering 2022, the Raiders are poised to take another step forward following several key additions.

NFL odds have the Raiders with an over/under win total of 8.5.

Defense was also a priority as the organization brought in All-Pro edge rusher Chandler Jones, inside linebacker Jayon Brown, and cornerback Rock Ya-Sin.

And, of course, there was the hiring of long-time New England Patriots offensive coordinator Josh McDaniels as the club’s new head coach. McDaniels was one of the most coveted names in this year’s coaching cycle and brings a wealth of football experience and knowledge to the Raiders’ sideline.

While they have the unfortunate pleasure of competing in the notoriously tough AFC West Division, the pieces are certainly in place for the Silver and Black to vie for a second straight postseason appearance.

What does the road ahead look like for Las Vegas? Let’s find out with a breakdown of the Raiders’ 2022 regular-season schedule.

The Raiders’ season opener is a rematch of last year’s wild Week 18 affair, which saw Las Vegas clinch a playoff spot thanks to a 35-32 overtime victory.

The Silver and Black have won three consecutive season openers.

Las Vegas’ home opener comes against an Arizona Cardinals team that will be without All-Pro wideout DeAndre Hopkins (suspension).

This game will be Arizona quarterback Kyler Murray’s first-career meeting against the Raiders.

The Raiders travel to Tennessee to battle the reigning AFC South champion Tennessee Titans. Tennessee may have traded away star receiver A.J. Brown, but Las Vegas’ revamped defense will still have their hands full trying to slow down superstar running back Derrick Henry.

Las Vegas’ first glance at Russell Wilson and the new-look Denver Broncos comes in Week 4 at Allegiant Stadium. Wilson leads a Broncos roster built to win now and should pose a much stiffer test than the team the Raiders swept last season.

The first of four primetime games for the Raiders comes against the class of the AFC West Division in Patrick Mahomes and the Kansas City Chiefs on Monday Night Football.

The Raiders were swept by KC last season and were outscored 89-23 in the two games.

This matchup is likely the easiest on the Raiders’ schedule. Las Vegas will be well-rested coming off a bye, while the Texans project to be amongst the worst teams in football again.

The Raiders square off against their former head coach Dennis Allen, who coached the team from 2012-14. Allen was promoted from defensive coordinator to New Orleans’ head coach in February, replacing the retired Sean Payton.

Back-to-back games in the region likely mean the Raiders avoid flying back to Las Vegas for the week’s preparation and choose to practice elsewhere.

Derek Carr and Co. upset the Indianapolis Colts in Week 17 of last season, altering the playoff fortunes for both sides. The following week saw Las Vegas clinch a postseason berth with a victory over the Los Angeles Chargers, while Indy had its playoff hopes dashed after a stunning loss to the league-worst Jacksonville Jaguars.

Lessons learned from their Week 4 matchup will be put to the test. The Raiders are 2-0 in their past two trips to Mile High.

Week 12 sees Las Vegas travel to Seattle to take on Russell Wilson’s former team, the Seahawks. This contest will be the first meeting between the teams since October 14, 2018.

The stakes may not be as high as last season’s Week 18 showdown, but this contest could go a long way in determining the outcome of the AFC West Division.

The Raiders get their crack at the reigning Super Bowl champs on Thursday Night Football. This game will feature some of the best players at their respective positions in wide receivers, Davante Adams and Cooper Kupp, and defensive lineman Aaron Donald and Maxx Crosby.

This primetime matchup will be a family reunion of sorts. Not only does Raiders head coach Josh McDaniels welcome his former mentor Bill Belichick to town, but several members of Las Vegas’ current front office, including general manager Dave Ziegler, once called themselves Patriots.

Coincidence that this game happens the day after the 50th anniversary of the “Immaculate Reception?” Not likely.

The Raiders may no longer be in the Bay Area, but the renewal of this storied rivalry should be a treat for football fans.

The date and time of this contest will be finalized according to possible playoff implications; something Raiders fans hope applies in this team’s regular-season finale.