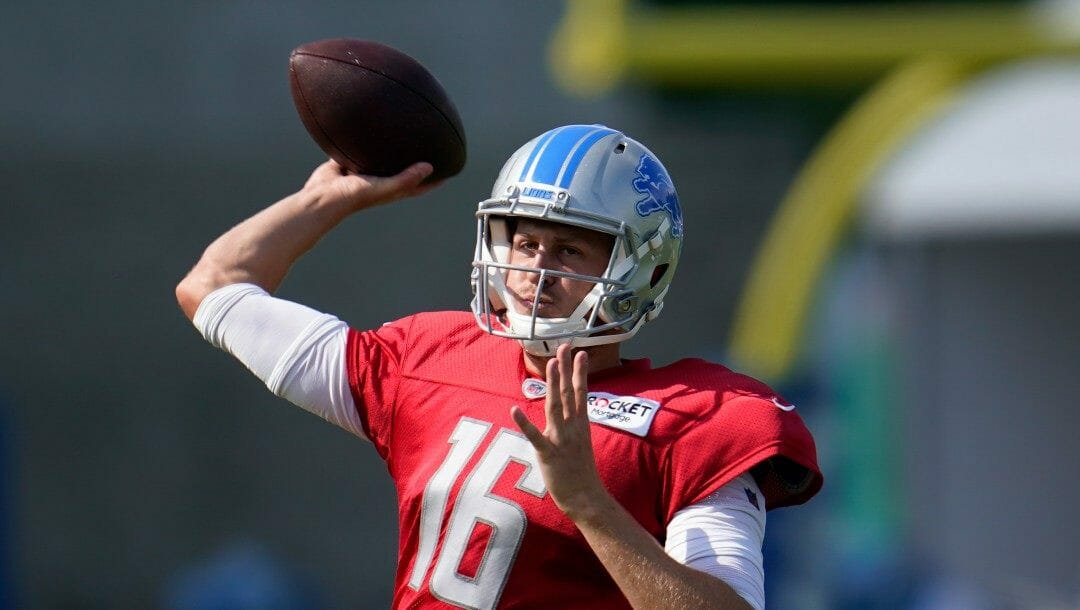 With key additions through the draft, the Lions are starting to build a roster that may be ready to win soon.

Here’s a position-by-position look at the Lions, whose NFL odds to win the Super Bowl are +12500.

After being sent to Detroit in the Rams’ trade for Matthew Stafford, Goff showed how much LA’s offensive system set him up for success.

He was 20th by DYAR and DVOA and was graded 28th by PFF in 2021. Granted, he had very little talent around him, and he still showed glimpses of why he was drafted first overall.

With another year in Detroit and the Lions picking up former Alabama wide receiver Jameson Williams in the draft, Goff’s career may recover.

The Lions’ running back group featuring D’Andre Swift is ranked No. 28 for the upcoming 2022 NFL season, with an overall grade of 51/100.

Swift has yet to realize his potential after he was drafted in the second round of the 2020 draft. A year ago, he was outside of the top 45 in DVOA and DYAR. He led the Lions with 617 yards and five touchdowns on 151 attempts, while Jamaal Williams was close behind with 601 yards and three touchdowns.

The Lions’ wide receiver and tight end group featuring Jameson Williams, Amon-Ra St. Brown and TJ Hockenson is ranked No. 16 for the upcoming 2022 NFL season, with an overall grade of 76/100.

The Lions have a great amount of potential out wide. For example, Detroit drafted Williams, a possible future NFL star once he recovers from an injury he suffered in college, 12th overall.

St. Brown was explosive as a rookie for the Lions. He totaled 912 yards and five touchdowns on 90 receptions in 2021. DJ Chark was brought in this offseason, and while he played just four games in 2021, the former second-round pick may be in a better situation offensively than he ever was in Jacksonville.

Hockenson is the Lions’ starting tight end. A year ago, he was 11th in DYAR and 18th in DVOA while catching 61 passes for 583 yards and four touchdowns.

The Lions have made drastic steps in this department in recent years. They were 21st in adjusted line yards and 12th in adjusted sack rate last year, but their unit should continue to coalesce in 2022.

Taylor Decker was sixth in PFF’s pass-blocking grades for tackles, and they expect Penei Sewell, the seventh overall pick last year, to continue to develop at right tackle.

Detroit’s adjusted line yards was 30th, and its adjusted sack rate was even worse in 31st. Its pass rush was graded 28th by PFF, and its run defense was last.

That’s why drafting Aidan Hutchinson, a star defensive end out of Michigan, second overall was so important.

The Lions were 27th in pass DVOA a season ago. They did little to address the issue.

No Detroit safety or cornerback was higher than 43rd in PFF’s grades. Jeff Okudah, a top-three pick in the 2020 NFL Draft, is projected to be a starter.