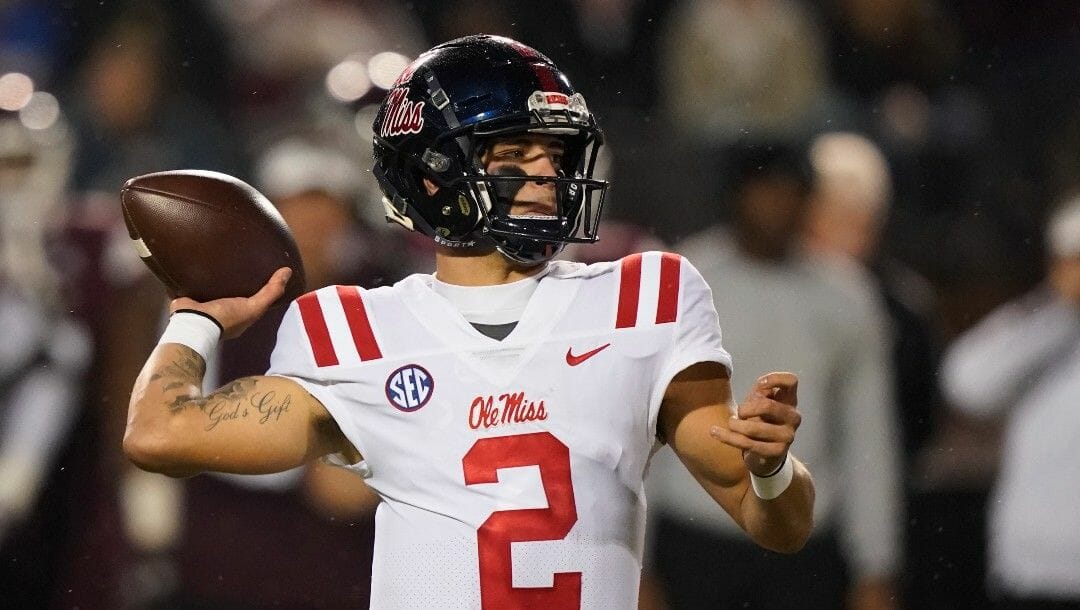 As if it were practice, Matt Corral flung a game-changing pass downfield with ease.

The Ole Miss quarterback, who may be one of the first passers taken in this year’s NFL Draft, was in charge of leading the Rebels to a last-second win. No. 17-ranked Ole Miss and No. 13 Arkansas were tied at 45, and only 76 seconds remained.

With Ole Miss at its own 32-yard line, Corral stood tall in the pocket. He looked left, but he didn’t like his options there. He peered right and threw immediately after.

Braylon Sanders was wide open, and the pass found him on the opposite 35. He sailed into the end zone for the go-ahead touchdown.

Corral’s physical tools, mixed with poise and an ability to read defenses, may bode well for him in the NFL.

Michigan defensive end Aidan Hutchinson has the leading NFL Draft betting odds to be picked first at -225 as of March 30.

After trading away Deshaun Watson, the Houston Texans need a quarterback and could select one with high potential at No. 13 overall.

The Texans may potentially stick with Davis Mills behind center. As a rookie last season, the third-round pick out of Stanford in 2021 showed some promise.

He passed for 2,664 yards, 16 touchdowns, and 10 interceptions on a 66.8% completion rate in 13 games in 2021. That could be enough to convince the Texans to give him one more season to develop as a starter.

However, drafting a quarterback with the 13th pick, which the Texans received from the Browns in the Watson deal, would be a relatively low-risk move. They could let Corral adjust to the NFL on the bench while seeing what Mills is capable of moving forward.

They wouldn’t have to trade up and could examine two potential options for their signal-caller of the future.

Corral was deemed to be among the best players in college football last season.

Matt Corral had some DEEP dimes at his Pro Day 🎯@OleMissFB pic.twitter.com/S84xNntToC

Corral possesses a skill set that should translate well to the pros.

He displayed patience when reading a defense. He doesn’t necessarily have to go after his primary receiver.

Corral has a quick release and throws a tight spiral. His passes, especially from short distances, have impressive zip. He can also work out of shotgun or under center.

He also often keeps throws away from defenders and only in places where his receivers can reach them. However, this mindset can occasionally lead to overthrows or underthrows — simply off target.

He’s comfortable checking down and looking for other options. As evidenced by his low number of interceptions, he doesn’t often force throws.

When Ole Miss was down 10-9 at Tennessee this past season, the Rebels were 33 yards from the end zone looking to gain the lead. Corral, calm in the pocket, pump-faked. Between that and a double move by wide receiver Dannis Jackson, defensive back Alontae Taylor was drawn out of position.

Corral took his shot along the right sideline, and the ball landed just beyond two defenders and in Jackson’s hands for a touchdown.

Corral can use his mobility at pivotal times when defenses don’t respect it. He also knows how to maneuver in the pocket while keeping his eyes downfield.

However, he was often too willing to settle for scrambling. He also may want to learn how to slide on more occasions.

In the fourth quarter at Mississippi State, the Rebels faced a third-and-goal within five yards of the end zone. Corral caught a shotgun snap, looked to pass, then bolted.

He weaved between offensive linemen. And just a couple yards from paydirt, he spun off of a hit from a defender and crossed the goal line.

Corral has shown he can operate an offense and keep drives alive. If a team can surround him with the proper talent and scheme, he is capable of thriving in the NFL.