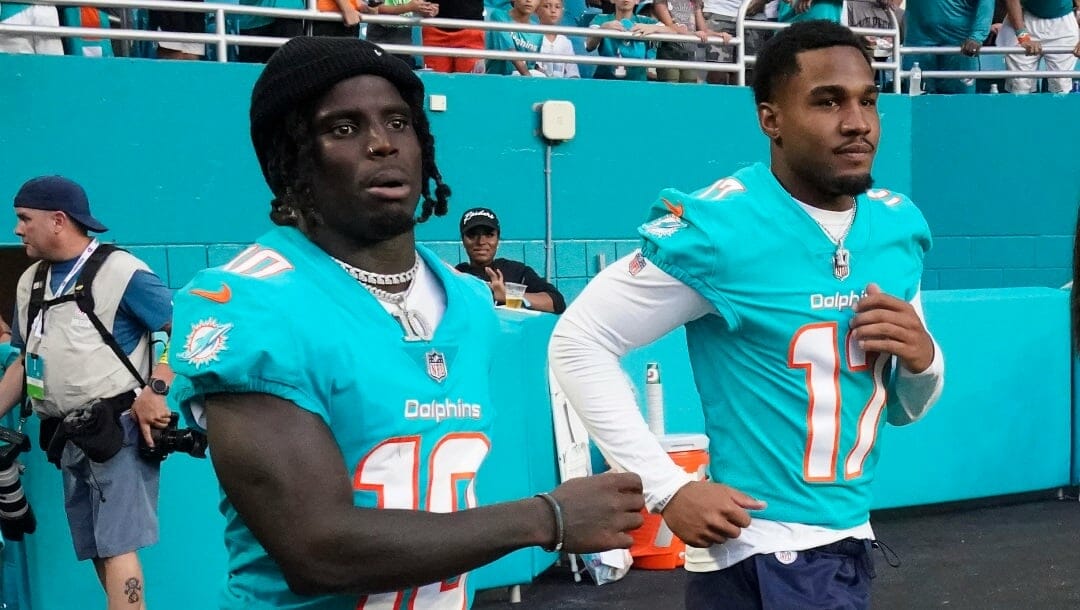 Competing against teams like the Buffalo Bills and New England Patriots has drawbacks, but some bettors might be content to roll the dice on this year’s iteration of the Miami Dolphins.

The Dolphins made waves this offseason, acquiring three-time All-Pro wide receiver Tyreek Hill from the Kansas City Chiefs and adding Chase Edmonds via free agency to play alongside Jaylen Waddle and Tua Tagovailoa. The Hill acquisition pushed them up the Super Bowl odds board in NFL betting.

The Miami Dolphins have Super Bowl odds of +4000.

Waddle showed he was worth the billing in his rookie season even without Hill.

The 2021 first-round draft pick grabbed 104 of 140 targets for 1,015 yards and six touchdowns en route to an All-Rookie Team nod. His chemistry with Tagovailoa was undeniable, as the Alabama Crimson Tide alum ranked in the top 23 All-Time for receiving yards by a rookie.

Adding Hill to the other side of the formations could create even more space for Waddle to thrive.

Hill has spent six seasons honing his craft in the Chiefs offense and will have a seamless transition with his new team, already getting his timing down with his new quarterback. The 28-year-old has eclipsed the 1,000-yard threshold in four of his six seasons and has been named to the Pro Bowl every year. That warranted the top draft picks the Dolphins gave up to land Hill.

Defenses can’t focus on both wideouts simultaneously, suggesting it will be a pick-your-poison dilemma for opposing teams. Whatever they decide, one or both receivers will prosper.

In 2021, Miami’s running game was a limiting factor.

The Dolphins averaged an insignificant 92.2 yards per game, fourth-worst in the NFL. For the first time in over a decade, the Fins have a legitimate feature back in Edmonds. The former Arizona Cardinal started 11 of 12 games last year in a timeshare role with James Conner.

Still, Edmonds put together some noteworthy metrics, toting the ball for 5.1 yards per carry, also matching a career-high with 5.7 yards per touch. With an emphasis on the passing game, Edmonds could have more room to operate out of the backfield and set a new standard.

Despite the loss of a defensive-minded head coach in Brian Flores, who shockingly couldn’t avoid the NFL hot seat, the Dolphins should maintain their average defensive standing from last season.

In that campaign, the Fins ended with the 16th-fewest yards and 15th-fewest points, ranking them as precisely average. Draft capital was used to land Hill, and the Fins couldn’t attract big-name free agents, meaning expectations should remain on par with last year’s performance. Their defense doesn’t need to be great, but they can’t afford to be worse than what we saw in 2021.

There is a noticeable gap between the top contenders in the AFC and the mid-tier teams. Unfortunately, the Dolphins find themselves in the latter group, with defense crippling any legitimate Super Bowl ambitions.

It would be unwise to rule the Dolphins out entirely, as they will undoubtedly be in the mix for a postseason berth. If the offense catches lightning in a bottle, a deep run might not be out of the question. That’s reflected in their betting action, with money dragging the Fins’ win total and Super Bowl odds towards the top-end of the spectrum.

Miami is right where they belong on the betting board, but they could up-end the AFC bracket come playoff time.