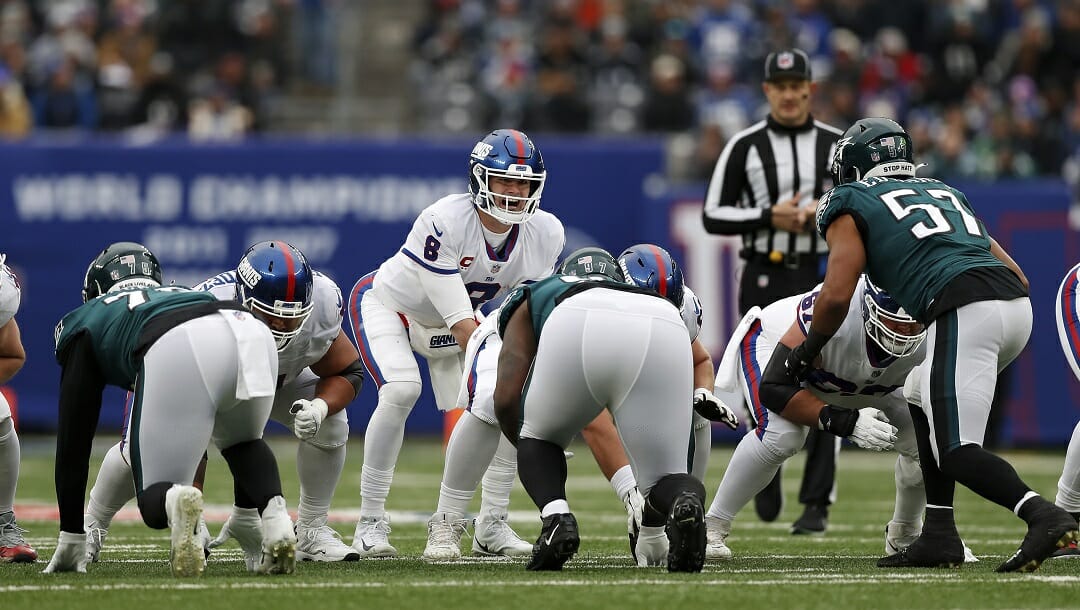 After a miserable 4-13 season, the New York Giants enter 2022 with a new general manager in Joe Schoen, a new head coach in former Buffalo Bills offensive coordinator Brian Daboll, and a steely resolve to reestablish a competitive presence in the NFC.
They currently have an over/under win total of 7.5 when it comes to NFL betting.
For embattled fourth-year quarterback Daniel Jones, a fresh approach, improved offensive line, and healthier offensive weapons are all encouraging signs after a 2021 season he would just as soon forget.
He suffered a season-ending neck injury in Week 12, and the Giants staggered across the finish line, losing their final six games, and were outscored 85-20 in their last three. By season’s end, New York’s offense ranked 31st in total yards per game (287.3), 31st in points per game (15.2), and 31st in red-zone scoring attempts per game (2.2).
Jones enters the final year of his rookie contract, with the club’s fifth-year option already declined. After an excellent rookie season, the 25-year-old’s tenure has been hampered by his injuries and injuries to key offensive personnel.
Star running back Saquon Barkley played in just two games in 2020, and his return in 2021 was carefully managed. Wide receiver Sterling Shepard, a force on the field, has been hampered by injuries the past few seasons, playing in only seven games last year after suffering an Achilles injury. He’s expected to be ready come September.
Rookie receiver Kadarius Toney was also plagued with injuries in his inaugural campaign but showed that when healthy, he can be a special player. Last year’s prized acquisition, wideout Kenny Golladay, never seemed to find his stride, obviously marred when Jones was lost to injury.
Defensively, the Giants bolstered their pass rush with first-round draft selection Kayvon Thibodeaux out of Oregon, felt by many to be the best edge-rusher in this year’s draft. Expectations for improved offensive performance will be welcomed by the Giants’ defense, which was on the field 52.65% of the time last season, fifth-worst in the league.

The 2022 schedule has New York squaring off against the AFC South, facing playoff contenders Tennessee Titans and Indianapolis Colts, as well as the struggling Jacksonville Jaguars and Houston Texans.
In addition to the traditional home and home matchups with their NFC East division rivals, the Giants tangle with the NFC North Division this year. Based on 2021’s opposition win percentage (.465), Daboll begins his inaugural season at the helm with the league’s fourth easiest schedule.
With the season ahead heralding a new beginning, let’s take a closer look at the Giants’ 2022 journey.

Date: Sunday, September 11
Time: 4:25 p.m. ET
The Giants open on the road against the defending AFC South division champions and titanic running back Derrick Henry. A stiff challenge for New York’s 25th-ranked run defense that yielded 129.0 yards per game last season. Offensively, Daniel Jones and Co. face a Tennessee Titans’ defense, ranked No. 1 against the run last season (83.5 yds/game) but 25th against the pass. This game could be interesting if all of the Giants’ weapons are good to go.

Date: Sunday, September 18
Time: 1:00 p.m. ET
The home opener marks a stretch of three consecutive games at MetLife stadium. To kick it off, the Giants welcome the Carolina Panthers, who staggered to a 5-12 record, losing their last seven games in 2021. With Christian McCaffrey sidelined, the Giants cruised past the Panthers 25-3 in Week 7, holding the Panthers to just 173 total yards and registering six sacks. This game figures to be much closer, with Carolina having improved its offensive line in the offseason and most recently acquiring former Cleveland Browns quarterback Baker Mayfield.

Date: Sunday, October 2
Time: 1:00 p.m. ET
The Giants will be out to avenge last year’s humiliating 29-3 defeat at Soldier Field in Week 17. Among the stats which stand out from that contest – New York, behind backup quarterback Mike Glennon, had negative six net passing yards to go with four turnovers. That may not be duplicated this time around, but this game could still be ugly – the Giants and Bears finished 32nd and 29th (tied) in total giveaways last season.

Date: Sunday, October 9
Time: 9:30 a.m. ET
Daniel Jones and Co. travel to London to battle Aaron Rodgers and the Davante Adams-less Green Bay Packers. While a wait-and-see attitude surrounds the Packers’ offense, the Green Bay defense looks rock solid. The Giants’ offense will have its hands full with a secondary among the league’s best.

Date: Sunday, October 16
Time: 1:00 p.m. ET
New York returns home to host the Baltimore Ravens, who collapsed down the stretch last season, losing their last six games to finish with an 8-9 record and missed the playoffs. Plagued by injuries in 2021, particularly in the secondary, Baltimore is expected to bounce back and again be a tough out.

Date: Sunday, October 23
Time: 1:00 p.m. ET
After last season’s 3-13 debacle, the Jacksonville Jaguars will look to improve under former Philadelphia Eagles Super Bowl-winning head coach Doug Pederson. With his tumultuous rookie season behind him, quarterback Trevor Lawrence will look to build on those moments where his natural talent and elusiveness flashed signals of what may lie ahead.

Date: Sunday, October 30
Time: 4:25 p.m. ET
The Giants travel to Seattle, where the Seahawks are adjusting to life without All-Pro quarterback and franchise legend Russell Wilson. Not the Seahawks of old, Seattle’s pass defense was ranked 31st last season, yielding a chunky 265.5 yards per game. This game is up for grabs.

Date: Sunday, November 13
Time: 1:00 p.m. ET
The Giants come out of the bye with two favorable matchups at home, starting with this one against the lowly Houston Texans.

Date: Sunday, November 20
Time: 1:00 p.m. ET
Winless on the road last season, the Detroit Lions were arguably better than their 3-13-1 record suggests. Detroit lost four games in 2021 by a field goal or less (two on the road), battled the Steelers to a tie at Heinz Field, and defeated both the Minnesota Vikings and Arizona Cardinals in games that mattered for each.

Date: Thursday, November 24
Time: 4:30 p.m. ET
The return matchup with the Cowboys at AT&T Stadium on Thanksgiving Day. Giants fans may find this one hard to digest.

Date: Sunday, December 4
Time: 1:00 p.m. ET
The Giants dropped both games last season to the Commanders. The Week 2 loss was particularly tough, with Dustin Hopkins hitting a 43-yard field goal at the end of regulation to give Washington a 30-29 victory. After spending just one season with the Indianapolis Colts, quarterback Carson Wentz becomes the Commanders leader.

Date: Sunday, December 11
Time: 1:00 p.m. ET
A late-season start to the home-and-home with the Eagles. The teams split their two games last year, the Giants’ 13-7 victory coming in Week 12 at MetLife Stadium. In that game, Eagles quarterback Jalen Hurts was held in check, completing 14 of 31 passes for 129 yards and three interceptions.

Date: TBD
Time: TBD
The Giants and Commanders tangle for the second time in three weeks to complete their home-and-home. A sweep by either team at this stage of the season could put the playoff flame out for the opponent, should it be flickering.

Date: Saturday, December 24
Time: 1:00 p.m. ET
The first of two tough matchups at home. This game could carry significant playoff-seeding implications for the Minnesota Vikings, who many expect to be in the thick of the battle for the top spot in the NFC.

Date: Sunday, January 1
Time: 1:00 p.m. ET
New York welcomes former Atlanta Falcons great Matt Ryan, who takes the quarterback reins in Indy. The Colts hope Ryan can provide a much-needed boost to their passing attack (28th ranked in passing yards per game last season). However, the clear and present danger for the Giants is All-Pro running back Jonathan Taylor, who will likely be vying for back-to-back rushing titles.

Date: TBD
Time: TBD
Does Week 18 culminate in Brian Daboll bringing the Giants from the depths to a playoff berth? A tough task, to be sure, but new management, a fresh outlook, young talent, and a friendly schedule can work wonders. Stay tuned.