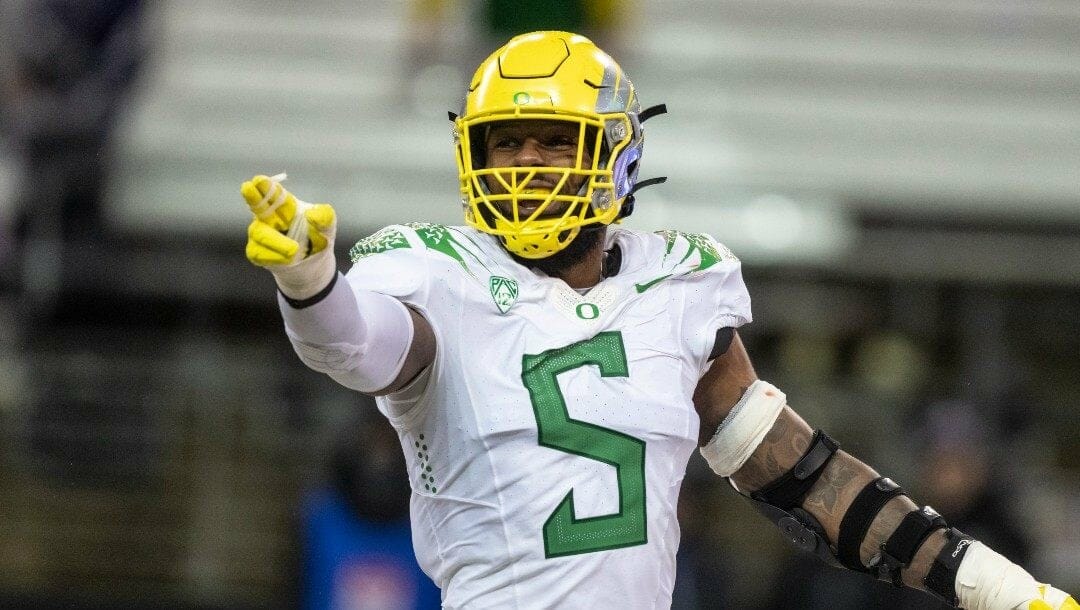 Whether it be due to injuries or lackluster testing performances, some NFL Draft prospects aren’t as highly touted as they were a few months ago.

NFL Draft betting odds have dropped for some players thought to be worthy of top-10 or even top-five picks. While this opens up chances for others to go in that range, these athletes may also fall to other teams later and add value.

Here’s a list of players whose stocks have trended downward.

(If you would like more insight on first-round prospects, my NFL mock draft has pick projections, prospect analysis and betting odds.)

Oregon defensive end Kayvon Thibodeaux was once a clear-cut favorite to be one of the first three players to be drafted. Now some project him to fall out of the top five.

His draft position Over/Under is 4.5. He’s tied for the sixth-best NFL Draft odds to be picked first overall at +5000.

His skills are undeniable. One of the top recruits coming out of high school, Thibodeaux lived up to those expectations with a decorated collegiate career.

However, reports indicated Thibodeaux’s personality didn’t jive with some teams, leading them to seek other options. But if Thibodeaux can jell with a squad, his potential to become a spectacular player is evident.

Kyle Hamilton may not even go in the top 10 anymore.

He was once regarded as worthy of being drafted even as highly as No. 2 by the Detroit Lions. But pessimism about the value of a safety going that early is a growing sentiment.

Hamilton could be a generational talent. But teams may want to draft quarterbacks or edge rushers before they do a safety.

Once a candidate for a top-10 pick, David Ojabo may slip out of the first round.

The Michigan linebacker was regarded by some as an even better prospect than his teammate, Aidan Hutchinson. Hutchinson, a Heisman Trophy finalist, has the best odds to be taken second overall at -200.

However, Ojabo tore his Achilles during Michigan’s pro day. This may end up significantly altering where he’ll land.

Ojabo’s injury is worthy of concern. But if he can heal and eventually become the pro player he was expected to be, he could shine as a professional.

Both Evan Neal and Ikem Ekwonu have taken their turns being seen as the top offensive line prospect in this year’s draft.

Neal, out of Alabama, used to have the leading odds to be taken first overall. His opening draft position Over/Under was 1.5.

However, that has since dropped. His Over/Under is now 5.5, and he has the fourth-best odds to be taken first at +2000.

Let's not forget that Evan Neal was really, really good last season and has also dropped weight to improve agility and conditioning. https://t.co/XOj9xkSZjg

The NC State tackle’s draft position Over/Under is 4.5 and was previously 3.5. He still has the best odds to be the first offensive lineman selected at -200.

These movements are more of a statement about the teams with the first five picks, their needs and the positions they’re targeting. Both Neal and Ekwonu are intriguing players who are proficient at their positions.

Davis is a proven player in some ways but not in others. He was impressive as a run defender in college. He also displayed dazzling athleticism for his size at the NFL Combine.

But his sample size as a pass rusher is limited. Considering how much the NFL continues to trend toward an emphasis on passing, franchises may want a player who’s shown a knack for tracking down quarterbacks.

Nonetheless, Davis would be a valuable addition to many teams, so dropping out of the first round is unlikely.