Trading up for a Quarterback in the NFL Draft: How Often Does It Work? 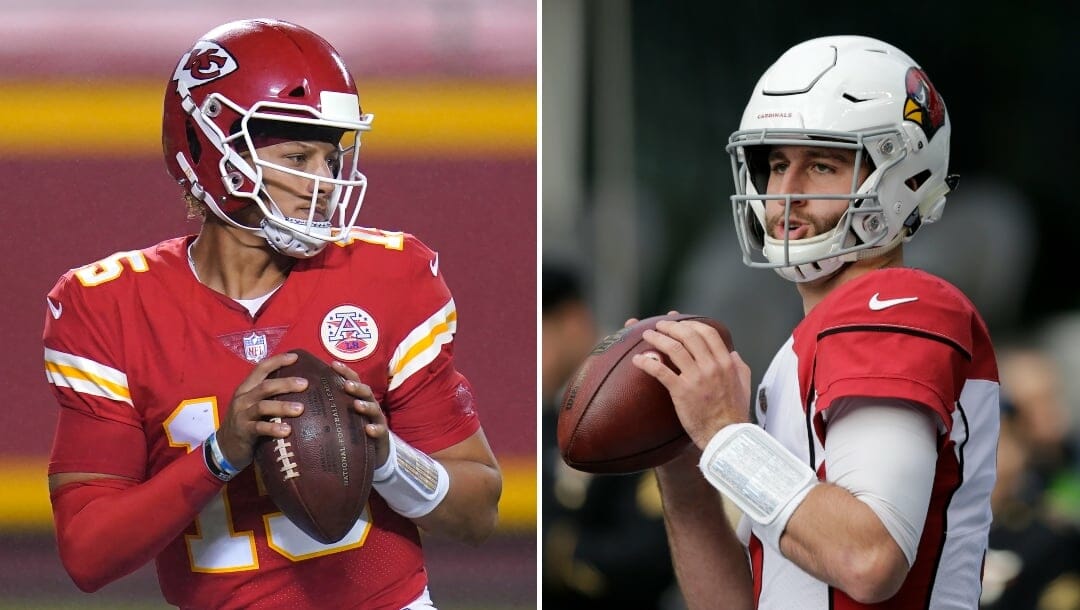 The St. Louis Rams drafted quarterback Sam Bradford with the first pick of the 2010 NFL Draft. Bradford signed a six-year, $78 million contract with $50 million guaranteed. It was the last contract of its kind.

Before the 2011 draft, the new rookie wage scale was implemented by a new collective bargaining agreement. Since then, NFL teams have taken far more risks to find a quarterback in the first round. And it’s working.

With a large crop of extremely divisive quarterback prospects populating the 2022 NFL Draft, it’s important to understand this trend as teams jockey for position to find “their guy.”

It’s not overly complicated calculus: The risk of drafting a quarterback in the first round has gone down therefore more teams are trying it and therefore it’s working more often.

The Chiefs moved up from the 27th pick to the 10th in 2017 to draft Patrick Mahomes. Despite off-the-field controversies, the Texans drafted a superstar two picks later when they traded up from the 25th slot to select Deshaun Watson.

The Ravens traded into the first round in 2018 to select future NFL MVP Lamar Jackson with the 32nd pick while Buffalo moved up the same year from the 12th pick to draft Josh Allen seventh overall.

On the field, all four would be considered superstar talents.

Additionally, the Rams and Eagles both moved up in 2016 to draft Jared Goff (No. 1 overall) and Carson Wentz (No. 2). And while neither is playing on his original team, both were instrumental in leading their respective squads to a Super Bowl appearance — and in Philadelphia’s case, winning it.

It’s impossible to call either Goff or Wentz a bust.

Last year, the 49ers moved up to select Trey Lance and the Bears moved up to pick Justin Fields. The jury is still out on those two maneuvers. Additionally, the Packers’ decision to move up four spots to draft Jordan Love in 2020 could also still work out for Green Bay should Love succeed Aaron Rodgers or get traded for a solid return.

How many were total busts?

Josh Rosen (Arizona, 2018), Paxton Lynch (Denver, 2016) and Johnny Manziel (Cleveland, 2014) would clearly qualify. The Jaguars’ decision to move up six spots in 2011 to draft Blaine Gabbert likely also counts even though he’s managed to stick around the NFL for a decade.

Minnesota moved into the first round in 2014 to draft Teddy Bridgewater with the last pick of the round and Washington famously moved up in 2012 to draft Robert Griffin III with the second overall pick. Both were solid players and their pseudo-failures are tied far more to injuries than to anything else.

Sam Darnold and Mitch Trubisky were also drafted after trades by the Jets (2018) and the Bears (2017) respectively. Both New York and Chicago paid small prices to move up a combined total of four slots.

Trubisky has a winning record as a starter and took the Bears to the playoffs while Darnold has started at least 11 games in each of his four NFL seasons. Frankly, both failings might be tied far more to the organizational landing spots than the players themselves.

So of the 17 times a team has traded up in the first round to draft a quarterback since the new rookie salary scale was implemented, three are undecided, four are superstars, two more helped their team reach the Super Bowl, two are victims of injuries, two were average starters and four were total busts.

Simple math illustrates that teams have “found their guy” more times than not when trading up in the first round.

The odds of making a move and acquiring a player with Super Bowl upside is around 50% — six or seven out of 14 — depending on how you view Griffin. That number outpaces the bust rate of 28% by a hefty margin.

In total, 65% — 9 out of 14 — led the team that drafted them to the playoffs. General managers would be stupid to ignore those odds.

In the 2022 class, there are wildly differing evaluations of the quarterbacks.

Then there are others who value Desmond Ridder’s leadership, composure and 33-5 collegiate record. Many love Matt Corral’s overall game and few will be able to ignore Carson Strong’s size and arm strength.

Some — like me — think Sam Howell has the best pure arm talent in the entire draft and could be the best prospect at the position.

The value of having a starting quarterback on a rookie salary combined with the clear reduction of risk has facilitated an explosion of movement in the first round over the last decade.

With so many varying opinions at the game’s most important position, fans should expect more of the same chaos when the first round of the 2022 NFL Draft rolls around on April 28.

You can view updated NFL Draft odds at the online sportsbook.