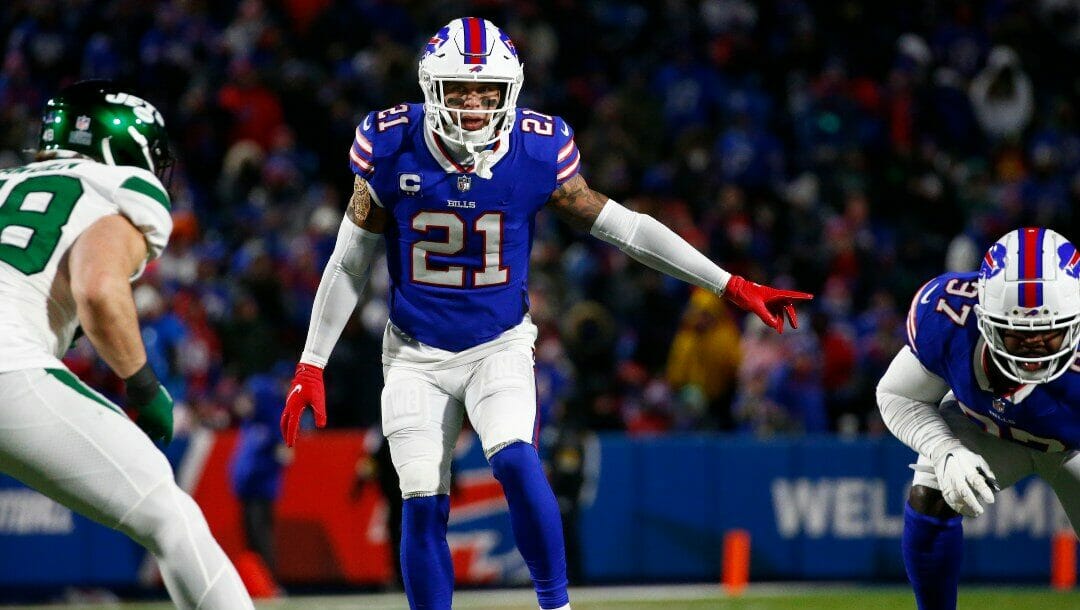 As NFL offenses began learning toward a more pass-heavy approach, defensive backs became much more crucial for team success. Five of the top-10 favorites in NFL odds to win the Super Bowl have some of the best secondaries in the league, highlighting their importance.

Here’s a ranking of the NFL’s defensive backfields.

The Lions were 27th in pass DVOA, a metric from Football Outsiders, a season ago. They did little to address the issue.

No Detroit safety or cornerback was higher than 43rd in Pro Football Focus’ grades among those who took at least 20% of the most snaps in the league. Even Jeff Okudah, a top-three pick in the 2020 NFL Draft, isn’t projected to be a starter.

The Falcons were 29th in pass DVOA last year, but at least they have some standouts. That includes A.J. Terrell, who was second in PFF’s grades of cornerbacks in his second season.

The Falcons also added veteran corner Casey Hayward, who was 14th in those grades. But no other defensive back was higher than 66th at their position.

The Giants, who were 14th in pass DVOA last season, moved on from safety Logan Ryan and cornerback James Bradberry in part as cost-cutting measures. But it didn’t make them better this year.

Adoree’ Jackson was 17th in PFF’s grades of cornerbacks, while Xavier McKinney was tied for 14th among safeties. But no starter still on the team was better than 69th at their respective positions.

The Jaguars had the second-worst pass defense DVOA last season. Shaquill Griffin, a former Pro Bowler, had the 21st-best grade at his position via PFF.

Darious Williams tied for 73rd in those grades among cornerbacks. Rayshawn Jenkins tied for 79th among safeties in PFF’s grades.

Seattle was 26th in pass defense DVOA and 21st in total defensive DVOA in 2021.

Jamal Adams, though regarded as among the best at his position, was 65th in PFF’s grades of safeties last season. Quandre Diggs was 24th in PFF’s grades among safeties. Sidney Jones was 30th via PFF’s cornerback grades.

Jamal Adams shoved Saquon aside and told Daniel Jones to gimme' that! 😤

The Texans were 22nd in pass DVOA last year, but their secondary starters won’t bring much experience in 2022. For example, they drafted cornerback Derek Stingley Jr. third overall and safety Jalen Pitre in the second round.

📺: #NFLCombine continues tomorrow at 10:30am ET on @nflnetwork pic.twitter.com/RrpDH2wzqe

While the Bears were 12th in pass DVOA last season, it seems they’ll be dealing with varying levels of experience in their starting lineup. Cornerback Kyler Gordon and safety Jaquan Brisker were drafted in the second round.

Former Pro Bowler and All-Pro Eddie Jackson provides some stability, but he was 69th in PFF’s grades at the position. Jaylon Johnson, another cornerback, was 57th.

Budda Baker, a four-time Pro Bowler and two-time All-Pro, helped the Cardinals take fifth in pass DVOA last season. But by PFF’s grades, no one in the secondary excelled.

No Cardinals cornerback was in the top 50 of PFF’s grades, and no safety was among the top 35.

Budda Baker with the big INT and return! #RedSea

Kendall Fuller was third in PFF’s grades of cornerbacks last season. But the team’s secondary takes a dropoff from there.

The Jets were last in pass DVOA last year. But they helped themselves through some offseason additions.

They picked up D.J. Reed, the ninth-highest graded cornerback by PFF last year with the Seahawks, and Jordan Whitehead, the 28th-highest graded safety with Tampa Bay. They also drafted Sauce Gardner fourth overall.

The Jets also hope to be boosted by Lamarcus Joyner, who played just one game in 2021 after a triceps injury.

Watch out for Lamarcus Joyner off the edge 🙏

The Raiders were 21st in pass DVOA in 2021, and that was with Casey Hayward on the team. Still, Las Vegas has some talent in its defensive backfield.

Nate Hobbs was fifth in PFF’s cornerback grades, and Rock Ya-Sin, who was 32nd in those grades last year with the Colts, is projected to start opposite him. Tre’von Moehrig was 26th among safeties.

Ahkello Witherspoon was 15th among cornerbacks. None of Pittsburgh’s projected starting defensive backs were higher than 65th, though.

🚨 TIP-DRILL INT for the WIN

The Panthers were less than stellar after finishing 18th in pass DVOA. Then they lost arguably their best defensive back in Stephon Gilmore.

Jeremy Chinn was graded 23rd among safeties by PFF, and the Panthers hope Jaycee Horn can live up to being the eighth overall pick last year after playing just three games as a rookie. But no one else in this secondary was higher than 60th in PFF’s grades.

Minnesota was 13th in pass DVOA last season but infused its secondary with talented youth by drafting safety Lewis Cine out of Georgia in the first round and Andrew Booth Jr. out of Clemson in the second round.

Harrison Smith was 11th in PFF’s grades of safeties during a Pro Bowl year, and Cameron Dantzler was 19th among cornerbacks. While accomplished in his career, Patrick Peterson was 64th in PFF’s cornerback grades.

Harrison Smith with the INT in OT! #SKOL

San Francisco should be fine after finishing 15th in pass DVOA last season.

In PFF’s grades, Jimmie Ward was tied for 16th, and Talanoa Hufanga was 50th among safeties. For cornerbacks, Emmanuel Moseley was 34th, and former Chief Charvarius Ward was 24th.

The Chiefs were 23rd in pass DVOA but eighth in PFF’s coverage grades. While losing Tyrann Mathieu, they traded up for Trent McDuffie in the first round of this year’s draft.

Rashad Fenton was seventh among PFF’s grades for cornerbacks, and Juan Thornhill was 30th for safeties.

The Colts were 17th in pass DVOA in 2021, but they made an upgrade with Stephon Gilmore at cornerback. He was PFF’s 12th-highest graded at the position, while Isaiah Rodgers was 28th.

The Eagles were 25th in pass DVOA but could be higher in 2022 if their secondary ends up coalescing. Darius Slay was a Pro Bowler last year and was fourth in PFF’s grades. Philadelphia also signed James Bradberry to play opposite Slay.

Marcus Epps was graded the 18th-best safety by PFF last year, and Avonte Maddox was tied for 25th among corners.

The Bengals’ safety tandem is solid. Vonn Bell tied for 21st and Jessie Bates III was graded 38th via PFF. They also drafted Dax Hill in the first round this year.

The Bengals were 24th in pass DVOA last season. Chidobe Awuzie was 16th in PFF’s grades of cornerbacks.

THE BENGALS CAN WIN IT WITH A FG. #NFLPlayoffs

The Patriots have talent and depth at safety. Adrian Phillips was eighth in PFF’s grades, Devin McCourty was 11th, and Kyle Dugger was 32nd. New England also picked up Jabrill Peppers.

Jalen Mills is the team’s highest-graded returning corner at 38th after J.C. Jackson departed. The 2021 Pro Bowler’s absence may lead to a dropoff in pass coverage, as the Patriots were third in pass DVOA.

The Cowboys were among the best teams in the NFL in shutting down air attacks, as they were second in pass defense DVOA. Trevon Diggs was an All-Pro last season after leading the league with 11 picks.

Jayron Kearse was 13th in PFF’s grades of safeties. Malik Hooker is another veteran safety on the team.

In PFF’s grades, the Titans had the best safety tandem in the league last season. Kevin Byard was first and Amani Hooker was third.

Kevin Byard with the CLUTCH INT in OT! #Titans

Pat Surtain II, a second-year cornerback, made a strong first impression after being drafted ninth overall out of Alabama.

After ending up 19th in pass DVOA in 2021, the Chargers addressed this weakness by adding J.C. Jackson, a Pro Bowl cornerback last season who was eighth in PFF’s grades.

Derwin James, who just received a sizable contract extension, was 10th in PFF’s grades of safeties after making the Pro Bowl two of the last three seasons. The Chargers also hope 2021 second-round pick Asante Samuel Jr. can continue to ascend.

J.C. Jackson went from undrafted gem to one of the top CBs in the league. pic.twitter.com/wAlyIAMNV5

Xavien Howard was a Pro Bowler the last two seasons and an All-Pro in 2020. Opposite him, time will tell if Byron Jones will be ready for Week 1 following offseason surgery.

Xavien Howard is a superstar@Iamxavienhoward | @MiamiDolphins

The Saints were fourth in pass DVOA in 2021. That was before they added star safety Tyrann Mathieu, albeit while losing Malcolm Jenkins and Marcus Williams in the offseason.

Marshon Lattimore is among the best cornerbacks in the game. He’s made the Pro Bowl four of the last five seasons.

All six QBs have now been intercepted.

Marshon Lattimore should get a prize or something for completing the cycle. 🤷‍♂️

The Ravens, who were 30th in pass DVOA, hope injuries don’t affect them as much as they did in 2021. Marcus Peters, who didn’t play last year, and Marlon Humphrey are two former All-Pro corners hoping to bounce back.

The Ravens also addressed their safety spots by picking up Marcus Williams, who was seventh in PFF’s grades for the Saints, and drafting former Notre Dame star Kyle Hamilton 14th overall this year.

Jordan Fuller was PFF’s 19th-graded safety. The Rams were sixth in pass DVOA a season ago.

Jaire Alexander is an elite cornerback when he’s healthy, but he played just four games in 2021. Green Bay had the 16th-best pass DVOA last season, and he should help with that.

Rasul Douglas was 18th in PFF’s cornerback grades, while Adrian Amos was tied for 19th among safeties.

Jaire Alexander tracks down the deep ball to pick off Garoppolo.

The Bucs were 10th in the NFL in pass defense DVOA and third in PFF’s team grades for pass coverage. Antoine Winfield Jr. was second in PFF’s grades among safeties.

Jamel Dean and Carlton Davis were 22nd and 23rd in PFF’s grades at cornerback, respectively.

The Browns had the seventh-best pass defense DVOA last season, and PFF rated their coverage the best in the league.

Their secondary features one of the game’s brightest stars in Denzel Ward. He was a Pro Bowler last season and was 13th in PFF’s grades at cornerback.

DENZEL WARD TOOK IT 100 YARDS FOR THE PICK-SIX

Three of the Bills’ starting four defensive backs are either former Pro Bowlers or All-Pros. In 2021, Jordan Poyer made the All-Pro team and was PFF’s 12th-highest graded safety.

Micah Hyde, though, was tied for fifth in those grades at safety. While playing just 11 games in 2021, Tre’Davious White made the Pro Bowl the previous two seasons and is among the best corners in the game.

Taron Johnson was 29th in PFF’s cornerback grades. While Dane Jackson is another projected starting corner, the Bills also picked up Kaiir Elam in this year’s draft to infuse this group with young talent.

Tannehill picked off by Jordan Poyer 😮