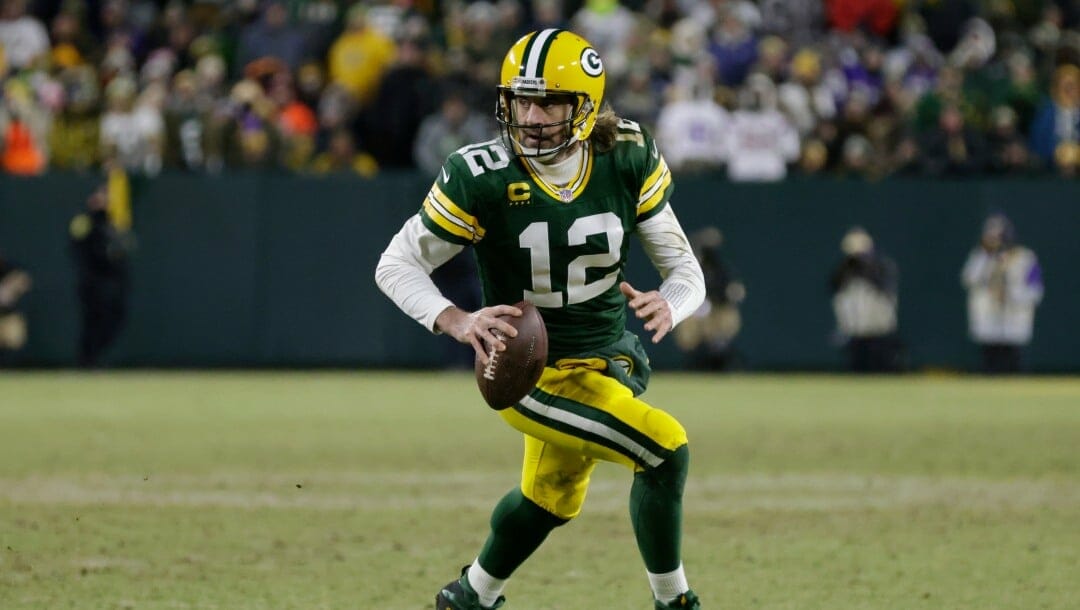 Green Bay Packers' Aaron Rodgers runs for a first down during the second half of an NFL football game against the Minnesota Vikings Sunday, Jan. 2, 2022, in Green Bay, Wis. (AP Photo/Matt Ludtke)
Colton Pool @CPoolReporter Aug 31, 2022, 6:53 PM
Share This Share

The Packers’ roster would’ve looked completely different if star quarterback Aaron Rodgers had decided he wanted to leave the team. But he stayed, and Green Bay has the fifth-best NFL odds to win the Super Bowl at +1200.

Here’s a position-by-position look at the Packers, who remain one of the top title contenders in the league.

While plenty of drama has surrounded Rodgers off the field, there’s no denying his talent on it.

The reigning MVP was first in DVOA and second in DYAR. He was also PFF’s third-rated passer.

The team around him will look much different in 2022, especially after Davante Adams’ departure. But Rodgers, who’s 38 years old, is still one of the best passers the league has ever seen and has yet to drop off.

2021 #Packers stats: Aaron Rodgers had as many picks (4) for the whole season as Tyler Huntley and Jacoby Brissett, who combined for 9 starts. Backup Jordan Love threw 3 picks while starting 1 game

The Packers were 22nd in total defensive DVOA @fboutsiders

The Packers’ running back group featuring Aaron Jones and AJ Dillon is ranked No. 5 for the upcoming 2022 NFL season, with an overall grade of 93/100.

It’s rare to have not one but two of the most efficient backs in the NFL.

The Packers’ wide receiver and tight end group featuring Allen Lazard, Sammy Watkins and Robert Tonyan is ranked No. 27 for the upcoming 2022 NFL season, with an overall grade of 61/100.

The Packers lost a significant amount of talent in Davante Adams and Marquez Valdes-Scantling this offseason. Lazard, who was fifth in DVOA and 21st in DYAR, is the leading returning receiver after racking up 513 yards, 40 receptions and eight touchdowns.

They picked up Watkins via free agency and Christian Watson, a second-round pick from North Dakota State, via the draft in hopes of helping Aaron Rodgers. Tonyan is back for Green Bay at tight end after playing just eight games in 2021.

This ranking greatly hinges on the health of the group. Last season, they were third in adjusted line yards and sixth in adjusted sack rate.

David Bakhtiari, a former All-Pro left tackle, played just one game last season following an ACL tear in 2020. He was put on the physically unable to perform list in July.

The Packers’ adjusted sack rate was 20th, and their adjusted line yards were 26th. Their pass rush, though, was graded second by PFF, and their rush defense was graded 12th.

Green Bay placed an emphasis on defense in the draft, taking Devonte Wyatt and Quay Walker in the first round. That should pay off.

Kenny Clark is fresh off a Pro Bowl season. Rashan Gary and Preston Smith were top 12 in PFF’s grades of edge rushers. All-Pro De’Vondre Campbell was rated the second-best linebacker by PFF.

Jaire Alexander is an elite cornerback when he’s healthy, but he played just four games in 2021. Green Bay had the 16th-best pass DVOA last season, and he should help with that.

Rasul Douglas was 18th in PFF’s cornerback grades, while Adrian Amos was tied for 19th among safeties.