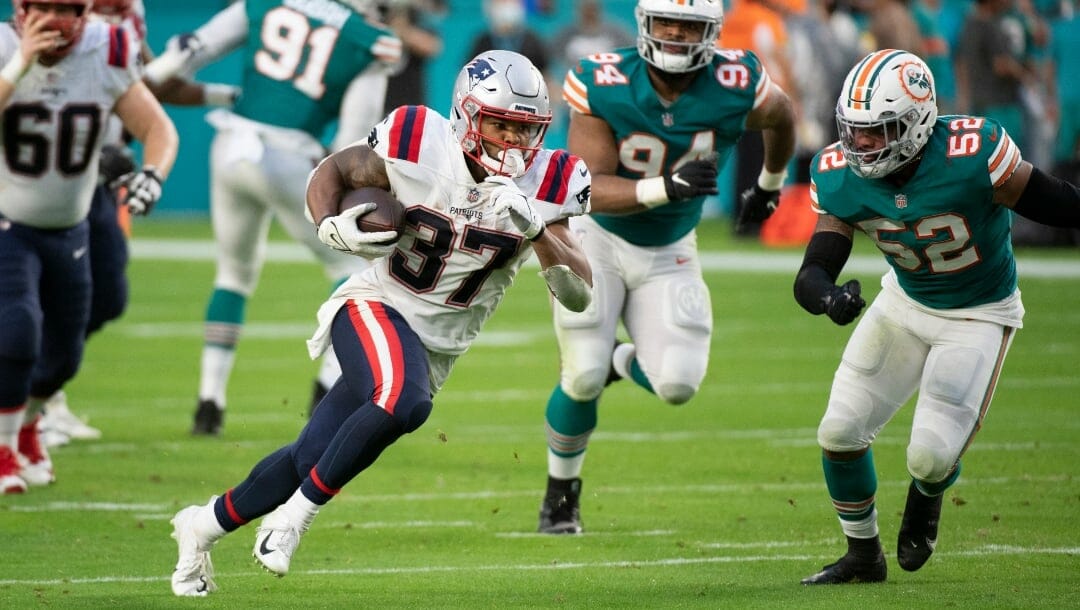 Mac Jones’ development was instrumental in the Patriots reaching the NFL playoffs last year. They hope he improves even more in Year 2 as they aim to get past the Wild Card round.

Here’s a position-by-position look at the Patriots, whose NFL odds to win the Super Bowl are +4000.

It’s tempting to rank Jones higher based on his rookie season alone.

Jones was 12th by DYAR and 13th in DVOA last season. Within the stability of the Patriots’ system, he was in a fantastic situation to thrive as a rookie.

The question remains if he can sustain that success. Jones could very well be even higher on this list next year.

The Patriots’ running back group featuring Damien Harris is ranked No. 11 for the upcoming 2022 NFL season, with an overall grade of 82/100.

While Harris wasn’t relied on as a workhorse running back, ranking 15th with 211 carries in 2021, he was still one of the most effective when he did have the ball. He was fifth by DYAR and 10th in DVOA. And though he only caught 19 passes on 21 targets for 139 yards, he was graded ninth as a receiving back by PFF.

With Rhamondre Stevenson and newly-drafted Pierre Strong Jr., the Patriots will likely continue mixing up their backfield personnel.

The Patriots’ wide receiver and tight end group featuring Kendrick Bourne, Jakobi Meyers and Hunter Henry is ranked No. 25 for the upcoming 2022 NFL season, with an overall grade of 63/100.

Bourne caught 55 passes for 800 yards and five touchdowns on his way to becoming the No. 1 receiver according to DVOA and 14th by DYAR. Meyers was New England’s leading receiver with 866 yards, 83 catches and two touchdowns in 2021. He was 70th in DYAR and 72nd in DVOA.

Nelson Agholor was 62nd in DYAR and 57th in DVOA last season. The Patriots added DeVante Parker in hopes of bolstering their receiving corps.

Henry and Jonnu Smith will likely see playing time at tight end again in 2022. Henry caught 50 throws for 603 yards and a team-high nine touchdowns. Smith recorded 294 yards and one score on 28 receptions.

The Patriots were ninth in adjusted line yards and eighth in adjusted sack rate. They tied for the third-fewest sacks allowed at 28.

The Patriots did lose Shaq Mason, graded the fourth-best guard, but they took Cole Strange in the first round.

The Patriots were 4th in total defense (310.8 yards allowed) and second in scoring defense (17.8)

The Patriots were graded ninth in run defense and 24th in pass rush last season. They were 14th in adjusted sack rate and 22nd in adjusted line yards.

Though Jamie Collins Sr. and Kyle Van Noy are no longer on the team, linebacker Matthew Judon and defensive lineman Lawrence Guy can impact games.

The Patriots have talent and depth at safety. Adrian Phillips was eighth in PFF’s grades, Devin McCourty was 11th, and Kyle Dugger was 32nd. New England also picked up Jabrill Peppers.

Jalen Mills is the team’s highest-graded returning corner at 38th after J.C. Jackson departed. The 2021 Pro Bowler’s absence may lead to a dropoff in pass coverage, as the Patriots were third in pass DVOA.