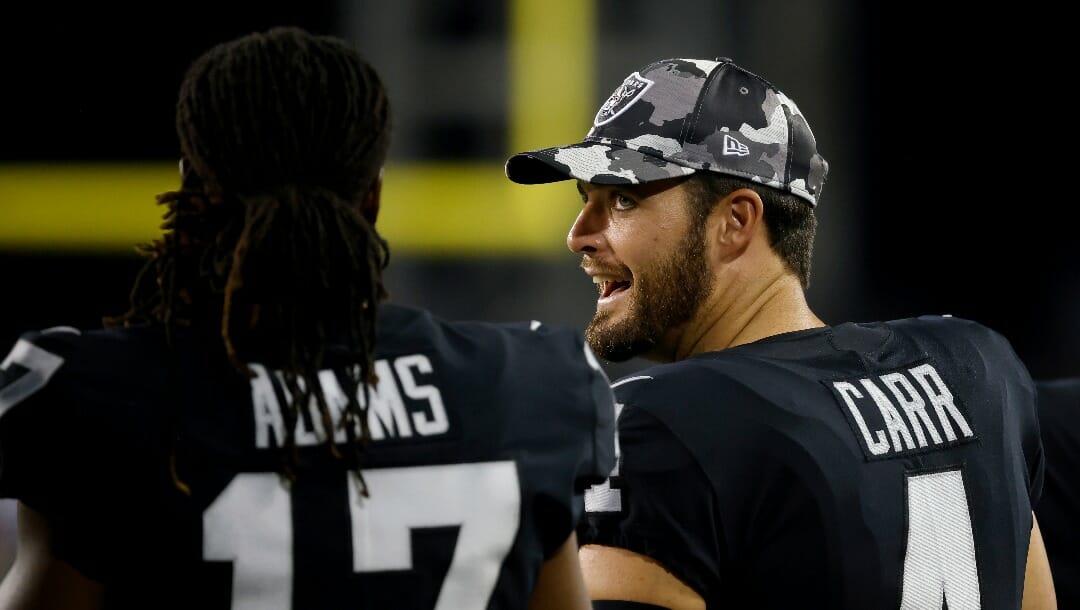 This offseason, the Raiders acquired wide receiver Davante Adams and pass rusher Chandler Jones. Las Vegas hopes that will be the difference in its quest for a championship.

Here’s a position-by-position look at the Raiders, whose NFL odds to win the Super Bowl are +3000.

Carr is one of the most stable quarterbacks outside of the top 10. Despite all that happened to the Raiders’ coaching staff, Carr was eighth in DYAR and 11th in DVOA last season. He was also graded 12th by PFF, one spot ahead of Patrick Mahomes.

And while his offseason hype has gotten out of hand, last season wasn’t an anomaly. His 2020 and 2019 DYAR were also in the top 10.

It’s tough to rank Carr higher based on his upside. He likely won’t carry the Raiders to a Super Bowl appearance, but he certainly could be an important part of their run to a championship.

The Raiders’ running back group featuring Josh Jacobs is ranked No. 27 for the upcoming 2022 NFL season, with an overall grade of 52/100.

However, with a revamped offense and Kenyan Drake as a backup, the Raiders might climb this list by next year.

The Raiders’ wide receiver and tight end group featuring Davante Adams, Hunter Renfrow and Darren Waller is ranked No. 4 for the upcoming 2022 NFL season, with an overall grade of 94/100.

The Raiders made a major upgrade at receiver when they traded for Adams this offseason. With 1,553 yards, 123 catches and 11 touchdowns, he was second in DYAR and 14th in DVOA in 2021.

Renfrow broke out last season, going off for 1,038 yards, 103 catches and nine touchdowns, while ranking 10th in DYAR and 17th in DVOA. Waller, a top-three tight end when healthy, played just 11 games but caught 55 passes for 665 yards and two scores last year.

All five of the Raiders’ primary starters are back, including Kolton Miller, the fifth-best tackle in PFF’s grades. While they were 17th in adjusted line yards and 18th in adjusted sack rate, PFF graded their run blocking 29th and pass blocking 22nd.

Maxx Crosby led the NFL in hurries with 77. Von Miller was second with 59 @PFF

Maxx Crosby is the star of this unit. He was second in PFF’s grades of edge players in 2021 with a league-high 77 hurries. While they lost Yannick Ngakoue, they replaced him with Chandler Jones, who’s fresh off of a Pro Bowl appearance.

Las Vegas’ pass rush was graded sixth by PFF, but its run defense was 25th. The Raiders were 11th in adjusted line yards, however, and 24th in adjusted sack rate.

The Raiders were 21st in pass DVOA in 2021, and that was with Casey Hayward on the team. Still, Las Vegas has some talent in its defensive backfield.

Nate Hobbs was fifth in PFF’s cornerback grades, and Rock Ya-Sin, who was 32nd in those grades last year with the Colts, is projected to start opposite him. Tre’von Moehrig was 26th among safeties.