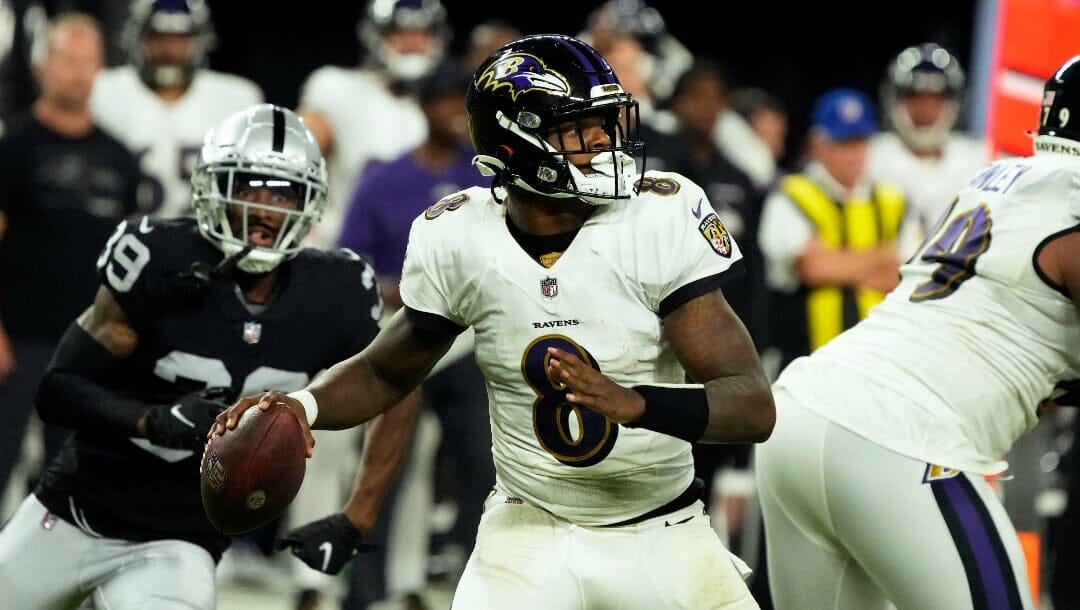 Lamar Jackson is one of the greatest dual-threat quarterbacks in the NFL, and his skillset could lift the Ravens to an AFC North title in 2022

Here’s a position-by-position look at the Ravens, who have NFL odds to win the Super Bowl at +2000.

Some 2021 Ravens stats: Lamar Jackson had the fifth-most time to throw despite having an O-line that was 29th in adjusted sack rate. He was also second in average completed air yards @fboutsiders @NextGenStats

While Jackson’s passing numbers took a step back last season, he’s still one of the most dangerous players in the league with the ball in his hands.

Jackson was 21st in the NFL in DYAR and 19th in DVOA. The Ravens also traded away Marquise Brown this offseason, so the Ravens will have to find receiving production from others.

But with a healthier running back corps, the Ravens should further utilize Jackson’s rushing prowess. And no matter who plays alongside Jackson, he’s still one of the most talented players in the NFL.

The Ravens’ running back group featuring JK Dobbins and Gus Edwards is ranked No. 12 for the upcoming 2022 NFL season, with an overall grade of 80/100.

Dobbins and Edwards were injured before the 2021 season began, which set the offense back. Baltimore, known for his prowess in the ground game, was outside the top 10 in rushing DVOA at 11th last season.

Both Dobbins and Edwards have shown that they can elevate their offense and keep pressure off Jackson when they are healthy.

The Ravens’ wide receiver and tight end group featuring Mark Andrews and Rashod Bateman is ranked No. 24 for the upcoming 2022 NFL season, with an overall grade of 66/100.

Andrews greatly elevates this assembly of pass catchers. He was first in DYAR last season and third in DVOA among tight ends after totaling the sixth-most receiving yards in the league (1,361), the fifth-most catches (107) and tying for the ninth-most receiving touchdowns (nine).

The Ravens’ wide receivers took a hit when Marquise Brown was jettisoned to the Cardinals. Bateman, a first-round 2021 pick, will be expected to produce much more than his 46 catches, 515 yards and one touchdown as a rookie. Devin Duvernay and James Proche II are other options for Baltimore.

The Ravens weren’t even an above-average offensive line last year, but they dealt with key injuries. Ronnie Stanley is expected back at left tackle, and he’s one of the best at his position when healthy.

Guard Kevin Zeitler was 11th in PFF’s grades among guards. And while Bradley Bozeman is gone, the Ravens drafted Tyler Linderbaum in the first round of this year’s draft.

The Ravens, who were 30th in pass DVOA, hope injuries don’t affect them as much as they did in 2021. Marcus Peters, who didn’t play last year, and Marlon Humphrey are two former All-Pro corners hoping to bounce back.

The Ravens also addressed their safety spots by picking up Marcus Williams, who was seventh in PFF’s grades for the Saints, and drafting former Notre Dame star Kyle Hamilton 14th overall this year.