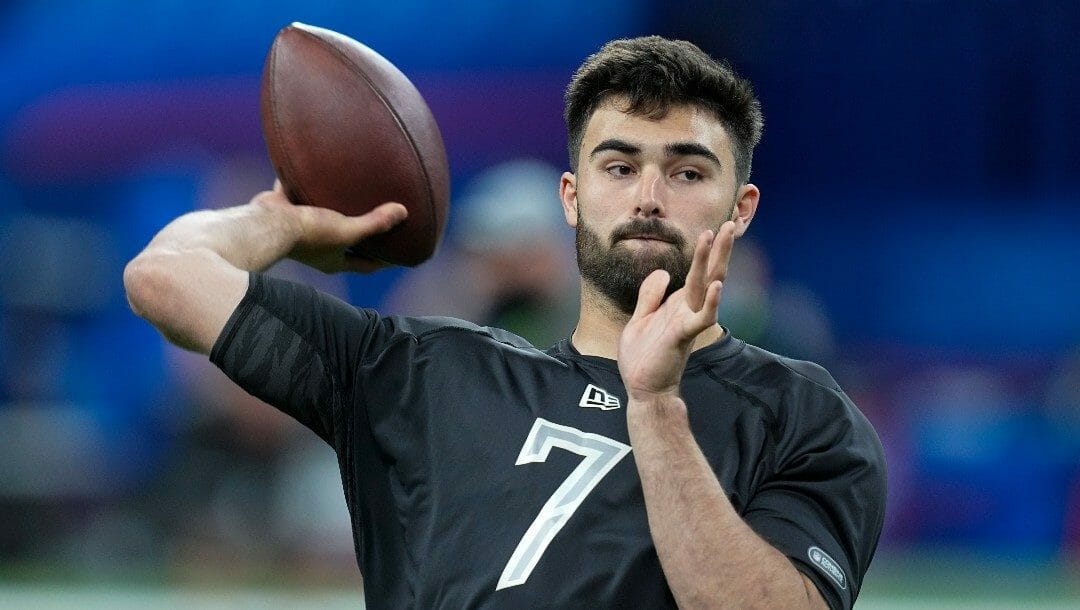 The North Carolina quarterback, who’s among the top contenders to be selected high in the NFL Draft, faked a handoff. He glanced right. Then he gazed left.

That’s when he found his target, a weakness in the Georgia State defense. The Tar Heels passer launched the ball from his own 36-yard line.

It arrived at the opposite goal line. And from that distance, it landed directly in the hands of wide receiver Antoine Green and just over the head of a defender in one-on-one coverage.

So Sam Howell might have a strong arm 🤯 pic.twitter.com/doUd7r0dwE

Howell is tied for the 12th-best NFL Draft odds to be selected first overall at +15000. Michigan defensive end Aidan Hutchinson has the leading NFL Draft betting odds to be picked first at -350 as of March 22.

The Carolina Panthers need a quarterback, and they might be willing to trade up in the draft to acquire one.

There’s a strong possibility Howell drops into the second round. But considering the Panthers have expressed interest in trading for other signal callers, they clearly are seeking an upgrade at the position.

I believe this is what you'd call an "NFL throw" from Sam Howell pic.twitter.com/L5wdKxAgm4

Howell possesses intriguing talent, and the Panthers could wait for him to fall in the first round so they don’t have to give up much for him. They don’t have a pick in the second or third rounds, but they could give up other assets, like picks next year, if they believe Howell is the answer at QB.

Miami at No. 29 could be a spot for Carolina to trade back into the first round and potentially select Howell.

He also owns several season and single-game records as well.

Howell was an All-ACC honorable mention as a junior in 2021. That season, he completed 63% of his passes for 3,056 yards and 24 touchdowns while totaling nine interceptions. On the ground, he accounted for 828 yards and 11 scores.

He was one of just three QBs in the Power 5 to total 20 or more touchdowns through the air and rush for 10 or more.

While his upside isn’t overwhelming, Howell does bring a good number of tools as a passer.

He has a strong arm and a quick release. His footwork is inconsistent, but he’s rather accurate on short and intermediate throws.

While he isn’t as decisive as he should be, he usually doesn’t force the issue and takes check-downs or throws it away when he should. He also has the patience to look at multiple receivers if his first read isn’t open.

This past season, Notre Dame brought just four players in pressure on a third-and-9, but Howell still only had three seconds before he was hit. He caught a shotgun snap, took three steps back and understood he needed to get rid of the ball.

Howell zipped a pass from his own 39-yard line from the left hash marks. He found Green for a diving catch along the opposite sideline at the other 39.

Howell is also mobile. UNC designed plenty of run-pass options and plays meant for him to run.

He was impactful this way, including in the red zone.

He impressively stepped up in the pocket while looking to pass and found lanes between defenders to keep plays alive. He was also a physical runner, which could earn him more yardage but could also lead to injuries in the NFL.

Against Georgia Tech, Howell caught a shotgun snap and faked a handoff. Then he ran right, juked out one defender, then stiff-armed another while trying to keep his balance. He ended the play by spinning out of three potential tackles and waltzing into the end zone.

Howell’s athleticism will help him acclimate to the pro ranks.