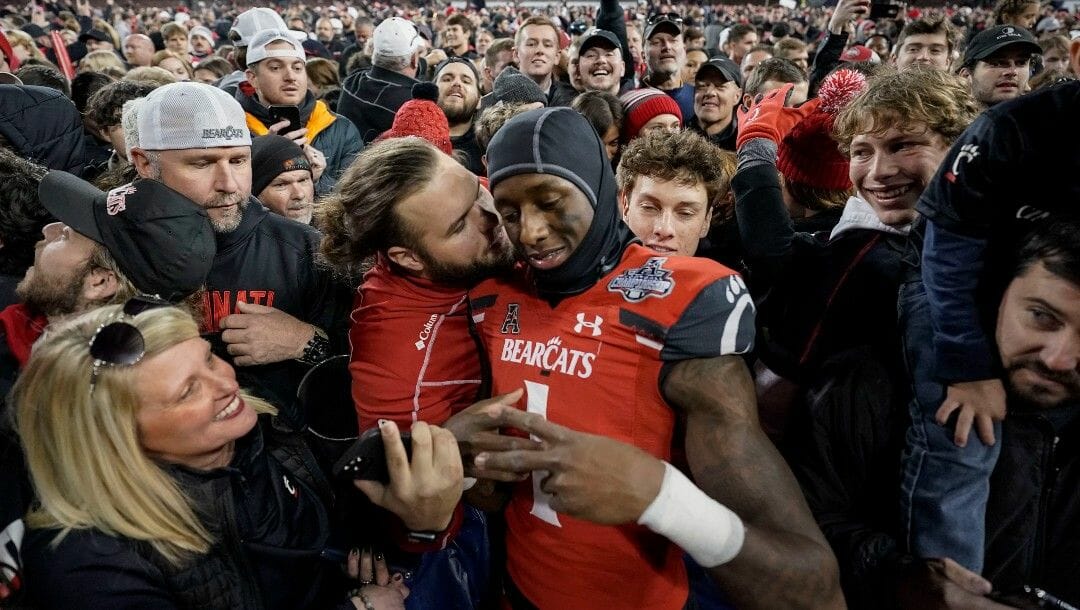 Every step of his career, Ahmad “Sauce” Gardner continued flourishing, all the way until his final collegiate game.

The Cincinnati cornerback, who’s worthy of being selected in the top 10 of the NFL Draft, was on a pivotal stage. In the College Football Playoff semifinal against Alabama, Gardner had a chance to prove his strong resume wasn’t merely due to Group of 5 schedules.

Gardner lined up across Jameson Williams, a receiver also deemed a potential first-round selection. Williams was on the line of scrimmage in trips to the left, usually a formation effective when defenders are in man coverage, which Gardner usually was.

Williams bolted for the end zone on a crossing route. The Crimson Tide completed a pass, but not to Williams. Gardner had that passing window closed off.

This was a common sight for Gardner. Any receiver striving to gain separation from him rarely does.

Gardner is tied for the ninth-best NFL Draft odds to be selected first overall at +10000. The Over/Under on his draft position is 8.5.

Michigan defensive end Aidan Hutchinson has the leading NFL Draft betting odds to be picked No. 1 at -350 as of March 17.

The Jacksonville Jaguars have the No. 1 overall pick. They could use help at essentially every position except quarterback after selecting Trevor Lawrence last year.

The Philadelphia Eagles need a cornerback and have the draft capital to move up if they want to select Gardner.

The Jets would be an interesting trading partner at No. 10 overall. If they drafted Notre Dame safety Kyle Hamilton at No. 4, they would have already addressed their secondary needs. The Jets, led by defensive-minded head coach Robert Saleh, might feel comfortable trading back just a few spots since the Eagles have pick No. 15 overall.

The Eagles ranked 25th in pass DVOA and in total DVOA last season. Gardner would instantly aid the effort to shore up this area.

Throwing the ball in the dirt every play would give the QB a better passer rating at 39.6. pic.twitter.com/tMNgeON2mI

One number stands above all others regarding Gardner, a two-time All-American. In his three collegiate seasons, he didn’t allow a single touchdown while in coverage.

In 2021, he tallied 40 tackles, three interceptions, three sacks, and four pass breakups. The Bearcats were first in the country in defensive pass efficiency (100.47), third in passing yards allowed (168.3 per game), third in interceptions (18), fourth in completion percentage (53.5%), and fifth in touchdown passes allowed (10).

He was a consensus All-American and unanimous AAC Defensive Player of the Year in 2021. He was a semifinalist for the Jim Thorpe Award, which goes to the best defensive back in the country, losing out to teammate Coby Bryant.

The year before, Gardner defended nine passes, which was second in the conference, to go with three picks, which tied for fourth, and 28 tackles. According to PFF, he gave up the nation’s third-lowest passer rating.

Coach Fickell: What will you do when your back’s against the wall?

Gardner allowed fewer first downs than plays he made on the ball. He helped Cincinnati’s defense rank high in the FBS in interceptions (third with 16) and passing efficiency (third at 101.26).

Gardner was a Freshman All-American in 2019 and First-Team All-AAC pick. He finished the season with 31 tackles, 11 passes defended and two interceptions returned for touchdowns. Though he was among the top 15 most targeted defensive backs, PFF graded him as the No. 6 overall cornerback.

Gardner’s best trait is his length. At 6-foot-3, 190 pounds with 33.5-inch arms, he easily blanketed receivers and broke up passes.

He didn’t consistently play fast. But concerns about his speed were mostly quelled when he clocked a 4.41-second 40-yard dash at the NFL Combine.

Though he was flagged a fair amount, Gardner often makes disruptive plays when the ball is thrown his way. He also isn’t fooled easily, as double moves don’t necessarily force him out of position.

Against South Florida this past season, quarterback Timmy McClain had five seconds to throw. He stayed in the pocket, then rolled left. Wideouts often break off their routes and run the way scrambling quarterbacks do, which can make matters more difficult for corners.

But despite all that time and adverse circumstances, Gardner was in the right position — between the quarterback and receiver. McClain threw, and Gardner leaped for the interception and kept his feet in bounds, despite his opponent behind him attempting to bat the ball down.

A complete package, Gardner stands out in a class loaded with skilled corners. His physicality lends well to him pressing at the line of scrimmage. That was the case even against bigger Alabama players.

Gardner was successful on blitzes, as he could find his way to a QB in a hurry. He was also unafraid of hard hits in run support.

In a contest with Notre Dame, Gardner was lined up over a receiver on the near sideline. Almost right after the snap, he darted toward the backfield as he saw a potential handoff.

Gardner was in front of running back Chris Tyree before he even crossed the line of scrimmage. With a wide base, Gardner wrapped up Tyree and took him down for minimal gain.

Plays like these would greatly help the Eagles clean up their defensive deficiencies.