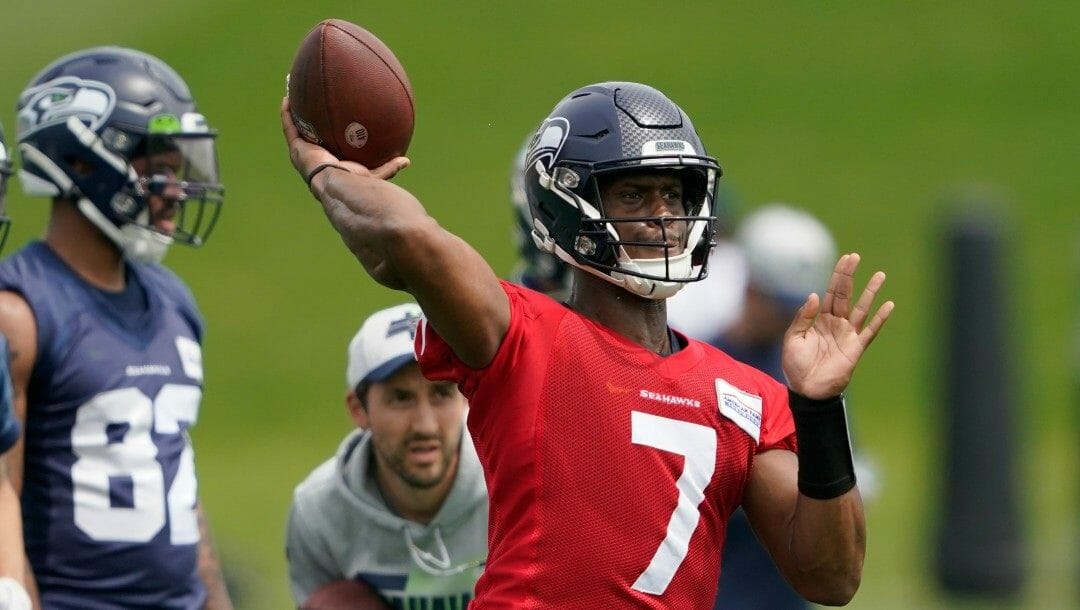 The Seattle Seahawks enter the 2022 season in rebuilding mode after last year’s disappointing 7-10 record, missing the playoffs for only the second time in the past 10 seasons.

They have an over/under win total of 5.5 when it comes to NFL betting.

The picks included the Broncos’ first, and second-round selections in the 2022 draft, giving Seattle four selections within the top 72. Head coach Pete Carroll and Co. are widely considered to have had a strong draft, addressing several areas of concern.

With the ninth pick in the first round, the Seahawks addressed a pressing need on the offensive line, selecting offensive tackle Charles Cross from Mississippi State. Seattle then bolstered its pass rush with Minnesota edge rusher Boye Mafe in the second round (40th selection overall). The team came right back with the 41st selection and added much-needed running back depth, grabbing Michigan State running back Kenneth Walker III.

An open question in training camp remains who will be the team’s starting quarterback. Veteran backup Geno Smith appears to have the inside track over Lock, but speculation looms that the club will make a move to upgrade the position.

High-level production from star receivers D.K. Metcalf and Tyler Lockett is a must if the Seahawks are to compete this season.

.@dkm14 has some impressive balance 👀

The Seahawks’ 2022 schedule is ranked 10th-most challenging in terms of opponents’ win percentage, and at a glance, one can see why.

In addition to the home and home games with their NFC West Division rivals (including the defending Super Bowl champion Los Angeles Rams), schedule makers have Seattle squaring off against the NFC South and AFC West.

For the Seahawks’ pass defense, ranked 31st last season, the aerial circus that is the AFC West poses a formidable challenge. The Kansas City Chiefs and Los Angeles Chargers finished second and third in passing yards per game last year, while Las Vegas, without Davante Adams, ranked sixth. Throw Russell Wilson and a talented Broncos receiving corps in the mix, and the Seahawks face a division where all four teams are expected to be in the playoff hunt.

Here is a closer look as the Seahawks embark on a new path for the franchise in 2022:

The rebuilding Falcons also begin a new chapter without their franchise quarterback, Matt Ryan, who will call signals in Indianapolis this season.

The Seahawks travel to Detroit to take on the Lions, who won their last three home games in 2021, including victories over the Minnesota Vikings and Arizona Cardinals. Seattle blew out the Lions 51-29 in Week 17 in what turned out to be Wilson’s last Seahawks home game. Rashaad Penny had a field day against a porous Lions defense, rushing for 170 yards on 25 carries with two touchdowns.

Seattle and New Orleans square off at the Caesars Superdome, as the Saints adjust to life without legendary head coach Sean Payton. New Orleans star running back Alvin Kamara, facing charges for his role in an alleged assault in a Las Vegas nightclub before last season’s Pro Bowl, could be suspended by the NFL and miss this contest.

The Seahawks dropped a 13-10 decision at home to the Saints in Week 7, with Geno Smith starting instead of Russell Wilson, who missed the game due to an injury. Smith completed 12 of 22 passes for 167 yards and a touchdown and was sacked five times.

Seattle and Arizona split their two games in 2021, each team winning in the other’s backyard. The Cardinals downed the Seahawks 23-13 in Week 11, with Seattle crushing Arizona’s hopes for an NFC West title with a stunning 38-30 victory in Week 18.

The Seahawks face Justin Herbert and the high-flying Chargers offense in a stern test for a Seattle defensive unit that struggled mightily against the pass last season.

The mid-season report card on the Giants will be in, who begin 2022 with renewed optimism under new GM Joe Schoen and former Buffalo Bills offensive coordinator Brian Daboll as head coach. When healthy, the Giants have a host of offensive weapons – the Seahawks could be in for a surprise in this one.

Weeks 9-10 and 12-13 around the Seahawks’ Week 11 bye mark a difficult stretch for Seattle. It begins with this game against the Cardinals at State Farm Stadium.

Seattle and Tampa Bay tangle in London, England, where Tom Brady and Co. will likely find themselves in the thick of the NFC battle and simply too much for the Seahawks to deal with.

Meeting Derek Carr and Davante Adams, whose reunion will have had a chance to flourish for more than half the season, does not bode well for the Seahawks. This game will be a must for the Raiders, who figure to be at a minimum in the AFC Wild Card mix.

The Rams swept the home-and-home last year as the first of two against the defending Super Bowl Champions. LA’s star receiver Cooper Kupp hauled in 16 passes for 228 yards and two touchdowns over the two games in 2021.

The impact that newly acquired Baker Mayfield has had at the helm of the Panthers’ offense will likely be established by now. A healthy Christian McCaffrey, and effective Mayfield, is a troublesome combination to be managed if the Seahawks look to pull this one out.

The Seahawks swing back into action on short rest with a Thursday night tilt at home against the 49ers.

Not exactly what any team would be wishing for. This matchup against Patrick Mahomes and the Chiefs at Arrowhead is likely a must-have for Kansas City, and a Christmas Eve the Seahawks will probably want to forget.

If the optimism surrounding the New York Jets is proven to have been justified, this New Year’s Day clash with the Seahawks at Lumen Field could be surprisingly meaningful.

The Seahawks close out their regular season at home in the return battle with the Rams. This game could potentially have playoff-seeding implications for LA, and Seattle would like nothing more than to make the Rams’ journey as miserable as possible.