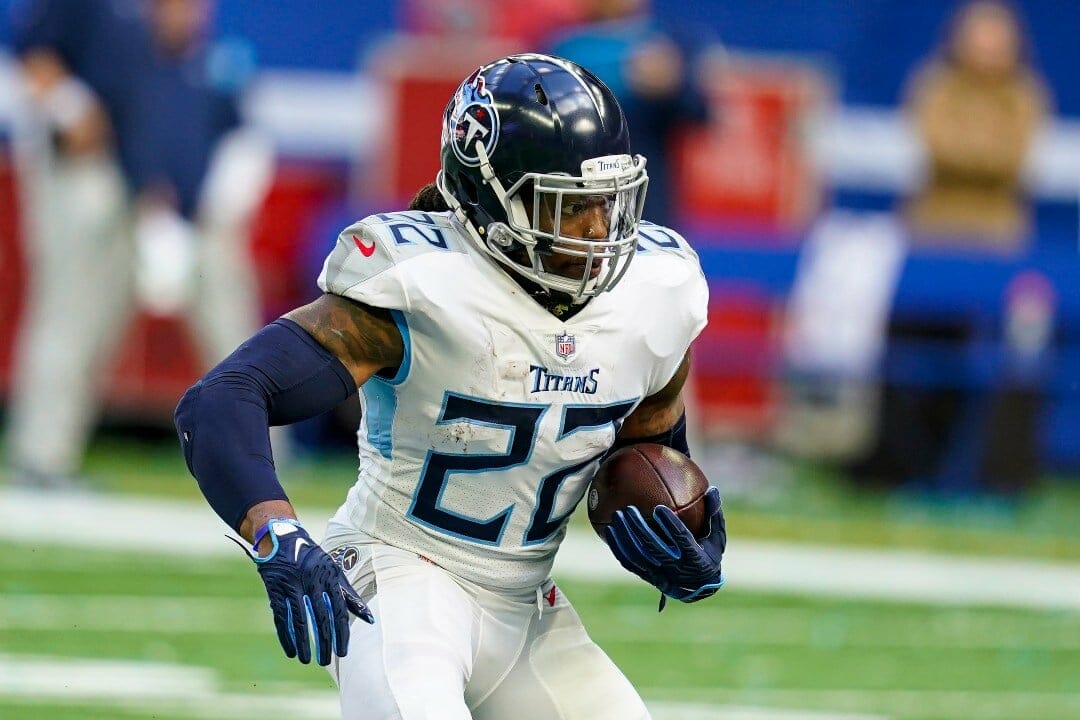 The Titans traded away AJ Brown this offseason and already are dealing with a key injury on defense. After having the AFC’s best regular season record in 2021, they will likely take a step back this year.

Here’s a position-by-position look at the Titans, whose NFL odds to win the Super Bowl are +4000.

After beginning his time in Tennessee on a high note, he took a step back last season, which was highlighted in the playoffs.

He was 27th in DYAR and DVOA last season. Tannehill certainly has the skill to bounce back. But he’ll have to do so without AJ Brown, who’s now with the Eagles.

The Titans did add Robert Woods, drafted Treylon Burks, have Derrick Henry coming back from injury and are in their second year with Todd Downing as their offensive coordinator. So Tannehill has another shot to prove himself as an above-average QB.

The Titans’ running back group featuring Derrick Henry is ranked No. 2 for the upcoming 2022 NFL season, with an overall grade of 97/100.

Henry is one of the best running backs in the league when he’s healthy, but that’s an important clarification.

While he played just nine games, he was still ninth in the NFL with 999 rushing yards in the regular season. Hassan Haskins is in line to be his backup.

The Titans’ wide receiver and tight end group featuring Robert Woods and Treylon Burks is ranked No. 18 for the upcoming 2022 NFL season, with an overall grade of 74/100.

While the Titans lost AJ Brown, they made some crucial inclusions to their wide receiver room.

While recovering from a season-ending ACL tear, Woods is still a seasoned veteran with a dynamic skill set. With the pick they gained from trading away Brown, the Titans also drafted Burks out of Arkansas. Austin Hooper, a fine option in the passing game, looks to be their starting tight end.

The Titans were 16th in adjusted line yards and 26th in adjusted sack rate. They return three of the five linemen who started the most games last season. None of their projected starting guards or tackles were in the top 20 of PFF’s grades, though Ben Jones was eighth among centers.

The Titans’ PFF grade for run defense was 10th, while their pass rush was 27th. They were 10th in both adjusted line yards and adjusted sack rate.

Jeffery Simmons, a Pro Bowl defensive tackle in 2021, was 22nd in PFF’s grades last season. Denico Autry was 36th in PFF’s grades among edge players. Harold Landry, the team’s top pass rusher, is reportedly out for the season after tearing an ACL in practice.

Kevin Byard with the CLUTCH INT in OT! #Titans

The Titans had the best safety tandem in terms of PFF grades in the league last season. Kevin Byard was first and Amani Hooker was third.

At the BetMGM sportsbook, you can bet on NFL games from the preseason through the postseason.

From Super Bowl odds and AFC South odds to weekly NFL spreads and player props, NFL odds are always on the board at the best online sportsbook.