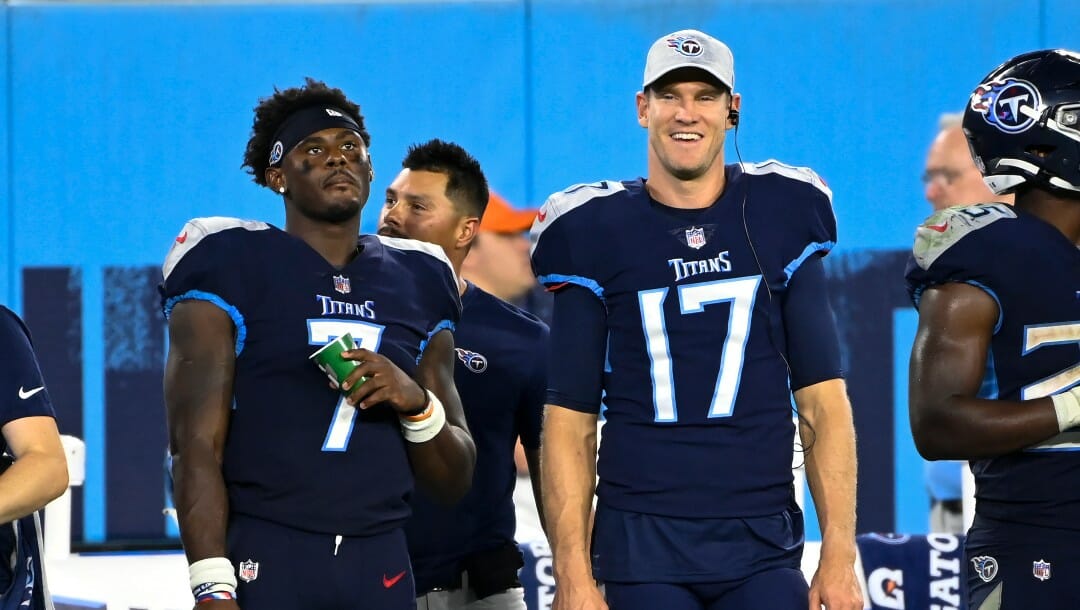 Playing in one of the weakest divisions in football isn’t enough to get bettors on board with the Tennessee Titans.

The two-time defending AFC South Champions enter the 2022 season at +4000 in NFL odds to win the Super Bowl. Having one of the best running backs in the game isn’t enough to counteract the concerns brought on by an aging quarterback and shoddy playoff track record, leaving the Titans on the wrong side of sharp action as we await kick-off in the regular season.

The Titans have made the playoffs in three straight seasons, enjoying the most success in 2019 when they made a run to the AFC Championship Game. Since then, they’ve experienced nothing but playoff disappointment, losing their opening-round matchups in each of the last two years.

Their offense has been wholly outmatched in those contests, putting up a combined 29 points across the two games. Ryan Tannehill is part of the problem, throwing for just 385 yards, two touchdowns, and four interceptions across the two contests.

It seems unlikely the Titans will improve their ineffective playoff performances, particularly with Tannehill in the autumn of his career.

The veteran passer has given the Titans every chance at competing over the last couple of seasons, but we’re starting to see Tannehill’s metrics deteriorate.

The 34-year-old has seen his QBR drop in each of the last three seasons, bottoming out with a 55.9 rating in 2022. His completion percentage has remained relatively consistent; however, other benchmarks indicate that his accuracy is diminished.

The evidence supports that Tannehill’s no longer in the upper echelon of quarterbacks, which limits how successful the Titans can be this season.

After several seasons of mediocre play, the Titans’ front seven was the best in the league last year.

Tennessee ranked tops in the league in rushing defense, allowing just 83.5 yards per game. Improving their first two layers of defense came at the expense of their secondary, though, with the Titans giving up the eighth most passing yards per game in 2021.

They head into the upcoming season with the same personnel, albeit with a much shorter leash. Tennessee elected to use draft capital to improve their defense, selecting cornerback Roger McCreary with their second-round selection and safety Theo Jackson with a sixth-round pick.

The Titans were outmatched in the passing game last year, and immediate improvement is necessary. It’s unclear if the changes they’ve made will improve their situation. Opponents will come out ready to test Tennessee’s passing defense, and they will probably get burned again.

Professional bettors were quick to take a stance against the Titans this season.

Tennessee’s win total moved towards the under, and they have settled further down the Super Bowl futures board. Tannehill has been mostly effective throughout the regular season but has struggled in the playoffs. We’re not anticipating progression from the Titans quarterback now that he’s contending with age and a rebuilt receiving corps.

Those issues are compounded by a less-than-stellar secondary that could allow opponents free range in the passing game. Tennessee will come crashing off the pedestal they’ve built for themselves over the last couple of seasons and can be looked past in the futures market.