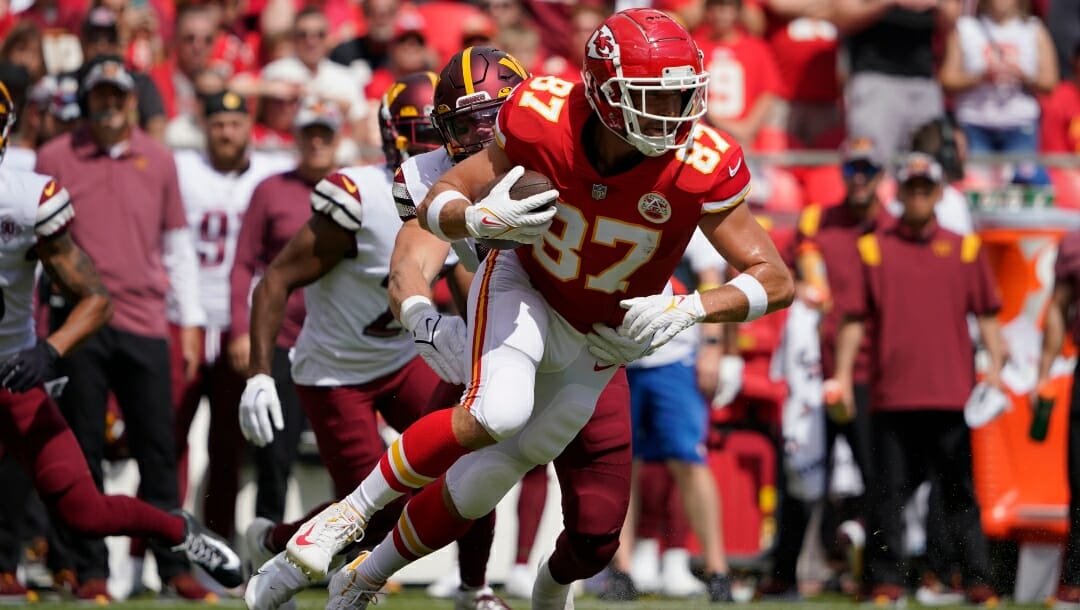 Eight seconds remained. The Chiefs were trailing by three points to the Bills in last year’s playoffs, two teams with top-three NFL odds to win the Super Bowl this year.

Throwing downfield, gaining enough yards to get within field goal range and force overtime, was the only option.

The Chiefs knew it. The Bills knew it and who quarterback Patrick Mahomes would target for that matter. And yet, that didn’t matter because Travis Kelce hauled in the clutch pass down the middle anyway. No one could stop it.

That play set up Harrison Butker’s game-tying field goal at the end of regulation. And that led to another inevitability: Kelce, a perennial Pro Bowl tight end, catching a touchdown pass from Mahomes to win in overtime and advance to the AFC Championship.

Kelce has been an integral part of Kansas City’s offense for years. That much won’t change. But what will be different with the Chiefs’ other star pass catcher, wide receiver Tyreek Hill, now gone?

Travis Kelce… the true mastermind behind the 13-second drive?

Kelce has been a Pro Bowler since 2015, even before Mahomes was on the team and Alex Smith was behind center for the Chiefs. Since Kelce became an All-Pro in 2016, he’s tallied at least 1,000 yards and 80 catches every season.

In the last four years, with Mahomes at quarterback, Kelce has averaged 1,277 yards and 99 receptions.

But this was also with Hill, one of the fastest players in the league who could stretch the field in the Chiefs’ dynamic offense. While people may remember Kelce in that Bills playoff game for his late heroics, Hill’s 19-yard catch and run set the Chiefs up to even have a shot at tying it.

TRAVIS KELCE WOULD NOT GO DOWN 💪

And while Kelce’s overtime touchdown catch is the one that sealed the win, the Chiefs wouldn’t have even made it past regulation if not for Hill catching a pass over the middle and outrunning every other Bills defender en route to a 64-yard score with just over a minute left.

Kelce’s expertise of finding soft spots in zone coverage, outrunning linebackers for substantial gains and beating out defensive backs in the end zone was partially possible because of a defense’s attention on Hill. His trade to the Dolphins marks a new era for Kansas City and Kelce.

But that was before Mahomes, a former MVP who obviously changes the complexion of the offense altogether, was in the picture.

Granted it was a small sample size with Hill out, but what does that mean? Kelce was targeted more often, hauled in more catches for more yards, but he scored less. And that’s critical.

Hill’s speed demanded secondaries back off. At any moment, he could fly by, and Mahomes had the arm strength to take advantage deep. That, at times, left Kelce more chances underneath.

Look at Hill’s NextGenStats route chart from the AFC Championship last season compared to Kelce’s. The Chiefs loved that Hill could outrun opponents, both toward the sidelines and down the field. Kelce didn’t have to go very far before he caught his passes because he knew where to find those gaps between defenders, especially in the middle of the field.

Yes, you heard that right.

The Chiefs didn’t think they could make the money work in order to keep Hill. Instead, they used first-round draft capital, some acquired in his trade to the Dolphins, to address their defensive woes with the additions of cornerback Trent McDuffie and defensive end George Karlaftis.

The Chiefs, who still have Mecole Hardman, did bolster their receiving corps in other ways. Through free agency, they picked up JuJu Smith-Schuster and Marquez Valdes-Scantling and selected Western Michigan’s Skyy Moore in the second round of the NFL Draft.

Smith-Schuster has experience being a No. 1 receiver with the Steelers, and Valdes-Scantling had the second-fastest play in 2021 among anyone with the ball in their hands. Moore, while young, ran the 40-yard dash at the NFL Combine in 4.41 seconds and could be productive as a pro immediately.

The Chiefs’ strategy is likely hoping some combination of these additions can make up for the production lost from Hill. What this all means for Kelce is yet to be seen.

Based on all the evidence, the Chiefs will probably target Kelce more than ever. His efficiency, especially in the red zone, may drop. His yards and receptions totals may only be increasing in 2022.

He’s still a solid blocker for a tight end. Among those at the position who saw 50% of the most snaps in the league last year, Pro Football Focus graded Kelce eighth in pass blocking and 15th in run blocking.

At almost 33 years old, his age is a concern, though. Not many tight ends have racked up 1,000-yard seasons at age 32, but not many have produced like Kelce has.

Tony Gonzalez, another Chiefs tight end legend, compiled his last 1,000-yard year at 32 in 2008. Other all-time greats at the position who played recently, like Antonio Gates, Rob Gronkowski, Greg Olsen, Jason Witten and Jimmy Graham, didn’t reach that milestone after that age either.

Still, Kelce has the athleticism — and probably the passing volume — to be the outlier.

Patrick Mahomes was on the move, but he finds Travis Kelce to tie it up!

Kelce’s NFL betting Over/Under for receiving yards is at 1,024.5 and for receptions is at 91.5. While it hasn’t been done often by a tight end his age, he should be going over as long as he remains healthy.

His Over/Under on receiving touchdowns is 9.5, which seems less certain. He’s only eclipsed that total twice in his career, and his touchdown frequency has dropped without Hill.