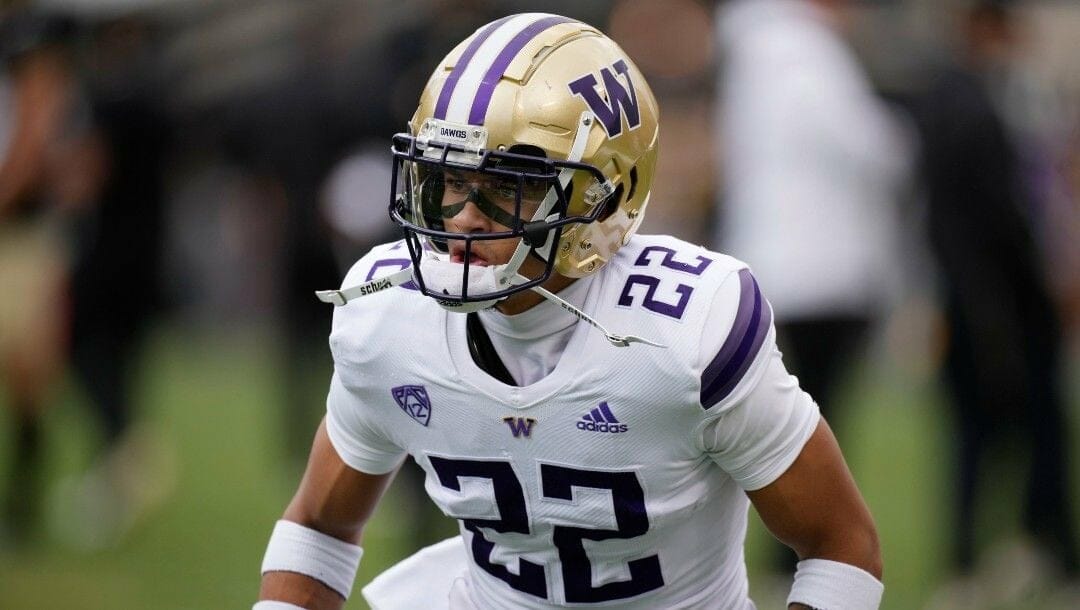 With one play, Trent McDuffie sent his team into a frenzy and killed his opponent’s hope.

Washington led Utah 24-21 with 18 seconds left. McDuffie, the Huskies cornerback who could be one of the first defensive backs taken in the NFL Draft, had a chance to seal the win for his team.

On a desperate heave downfield, a pass landed near UW’s 30-yard line. A completion would’ve given Utah enough time to tie the game. But while the ball was in the air, McDuffie cut off a receiver and picked the pass off.

McDuffie is skilled, opportunistic and a threat to derail the plans of NFL offenses.

McDuffie has the third-best NFL Draft odds to be the first cornerback taken at +1200. His odds of being selected third overall are +15000.

Michigan defensive end Aidan Hutchinson has the leading NFL Draft betting odds to be picked first at -250 as of April 8.

Now that the Kansas City Chiefs have the 29th overall pick, they could use it to help their secondary.

According to Football Outsiders, the Chiefs were 24th in total defensive DVOA, 23rd against the pass and 20th against the run a year ago. Their secondary was particularly exposed in the postseason.

And that was before star defensive back Tyrann Mathieu became a free agent. Mathieu is still considering which team he’ll sign with, so he may still return to Kansas City.

Either way, picking up McDuffie would be beneficial.

He has the skill set to play outside or in the slot, or he could even move to safety as needed. No matter what, the Chiefs need an upgrade.

Okay just hear me out.

McDuffie was among the Pac-12’s best at his position the last three years. He was named to the all-conference team after each of them.

This was despite tallying just two interceptions his entire time as a Husky. This is indicative of a lockdown corner that’s rarely targeted. Quarterbacks didn’t want to test him.

McDuffie was an All-American and All-Pac-12 selection in his final year of college in 2021. He tallied 35 tackles, one for loss, with six passes defended.

In 2020, he totaled 14 tackles, an interception, a pass defended and a forced fumble. He earned All-Pac-12 accolades.

He was a Freshman All-American and honorable mention Pac-12 Freshman Defensive Player of the Year. He racked up 45 tackles, three passes defended, three fumble recoveries, two forced fumbles and a pick in 2019.

He also returned five punts in his career and averaged 14.8 yards per attempt.

Only CB with 80+ grades in each of the past three seasons: Trent McDuffie👀

McDuffie is almost the complete package for a defensive back.

He’s displayed outstanding recognition. He seemingly knows what is going to happen before it does.

On a third-and-6 against Michigan, McDuffie lined up over a receiver out wide. But he realized a slot receiver was going to run a hitch near the line to gain and would be uncovered. His eyes in the backfield, McDuffie began breaking toward that receiver before the ball was even thrown.

With a 4.44-second 40-yard dash time at the NFL Combine, McDuffie constantly hustles, no matter where the ball is going.

Here’s one reason why Washington CB 22 Trent McDuffie has worked his way into the first round discussion for the 2022 NFL draft. pic.twitter.com/WZSDAN31DN

Against Oregon, McDuffie was in charge of covering a receiver running a shallow crossing route. He was about eight yards off of the line of scrimmage at the snap, so he had to sprint to catch up.

He dodged a couple of sets of receivers and defenders, all while keeping his eyes on his assignment. When the receiver caught the ball near the line of scrimmage, McDuffie had chased him down by then and ended the play with a remarkable hit for no gain.

McDuffie’s size is his most glaring weakness. At 5-foot-11, 193 pounds, he could be vulnerable against larger receivers.

But otherwise, McDuffie can thrive in a plethora of schemes, including zone or man. He’s also physical, which helps him in press coverage.

He relishes any opportunity to hit opponents. He possesses standout technique while tackling as he breaks down right before contact and makes sure to wrap his arms around ball carriers.

On a third-and-goal, Michigan was 2 yards from scoring. On a run up the middle, McDuffie began the play on the edge. But with a pursuit angle down the line of scrimmage, he took the ball carrier down before the goal line.

McDuffie can complete just about any task an NFL team may ask of him.