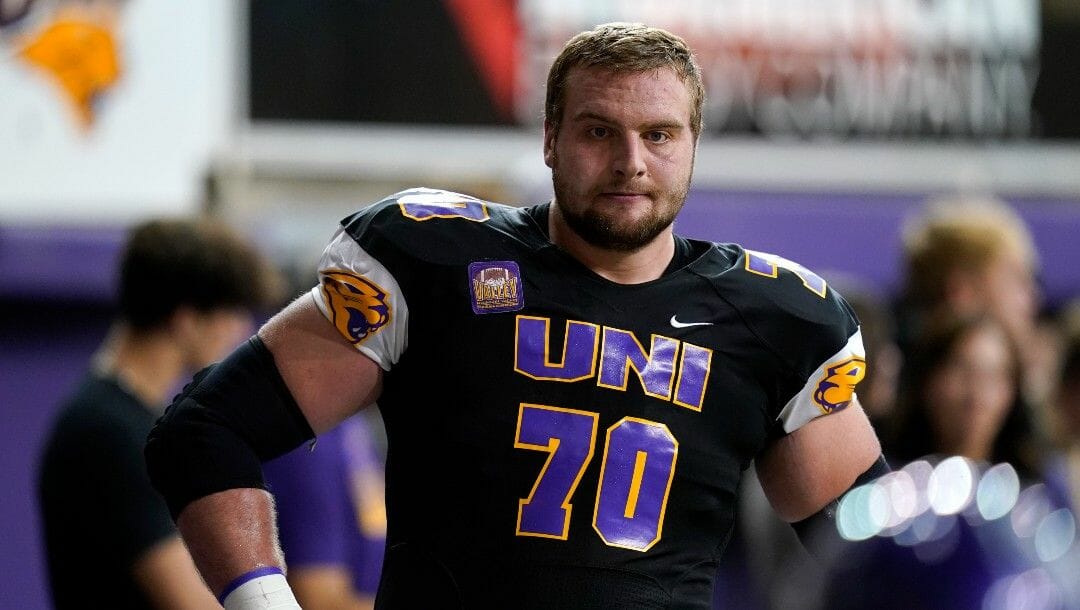 On fourth down, a crucial moment against an in-state foe, Trevor Penning was ruthless.

Penning, a top NFL Draft offensive line prospect out of Northern Iowa, was tasked with providing his passer time against Iowa State’s defensive front. The defensive end across from him tried to rush to the outside.

Penning threw him to the ground. This provided quarterback Will McElvain enough room to scramble to the left and, more importantly, buy more time.

The Iowa native didn’t receive an offer from the Cyclones. He clearly was motivated, showcasing a physicality that stands out even for his position.

Though Penning played at the FCS level, he dominated top-notch opponents.

Michigan defensive end Aidan Hutchinson has the leading NFL Draft betting odds to be picked first at -250 as of March 31.

The Los Angeles Chargers should jump at the opportunity to select Penning if he falls to No. 17 overall.

The Chargers selected Rashawn Slater a year ago, and he was successful right away as a rookie. He was Pro Football Focus’ 17th best tackle.

The Chargers were far from abysmal up front. They were 10th in adjusted line yards rushing, according to Football Outsiders, and fifth in adjusted sack rate.

But they could use Penning’s help.

The Chargers have already surrounded quarterback Justin Herbert with skill players and have bolstered their defense in the offseason. Further upgrading their offensive line would make that position group an even more impressive one.

Penning was a three-year starter for the Panthers, but he was at his best in 2021.

He was the only offensive lineman who was a finalist for the Walter Payton Award, which goes to the FCS’ Offensive Player of the Year. In 12 starts last year, Penning helped UNI rack up 1,686 rushing yards and 2,679 yards through the air.

Penning was a first-team HERO Sports All-American and an All-Missouri Valley first-teamer. In the spring of 2021, he started six games — five at left tackle and one at right — and was an all-conference honorable mention. He also started 15 games in 2019.

UNI has produced pro talent before. Spencer Brown, another former Panther, was taken in the third round of last year’s draft.

At the NFL Combine, Penning was first among all offensive linemen in the three-cone drill by clocking in at 7.25 seconds. He was also fourth with a 4.89-second 40-yard dash. He also had a 28-inch vertical and a broad jump of 9 feet, 3 inches with a 20-yard shuttle of 4.62 seconds.

Penning’s strength and power are evident.

In the run game, he drove defenders off of the line of scrimmage with ease. Even when he was on his heels, he was strong enough to keep defensive linemen at bay. He constantly illustrated a vicious edge, so he likely won’t be intimidated by any NFL defensive linemen.

Being from an FCS program shouldn’t be of concern.

For one, he played in the Missouri Valley which is littered with tough competition. And two, he was impressive against Iowa State, a Power Five program.

On top of that, any of those questions should’ve been answered during the Senior Bowl. A showcase of the best college prospects in the country, Penning not only survived, he thrived. Those who lined up against him often ended up on the turf that week.

In a matchup with the Cyclones, Northern Iowa called for a run play going away from Penning. But he shoved down the defensive end facing him anyway. And when his opponent tried to rise back to his feet, Penning pinned him down until the play was over.

While he has speed, Penning lacks lateral quickness. He could be beat around the edge in the NFL.

Otherwise, he has good footwork. He remains balanced as he’s being pushed around, and he keeps his feet going seemingly all the time.

When Iowa State tried to blitz on a passing down, Penning quickly went from double-teaming a defensive end with the tight end to picking up that linebacker. And he was quick to do so. By the time the ball was thrown, he was in the way of both defenders.

Penning is an obstacle for defensive linemen, even among professionals.