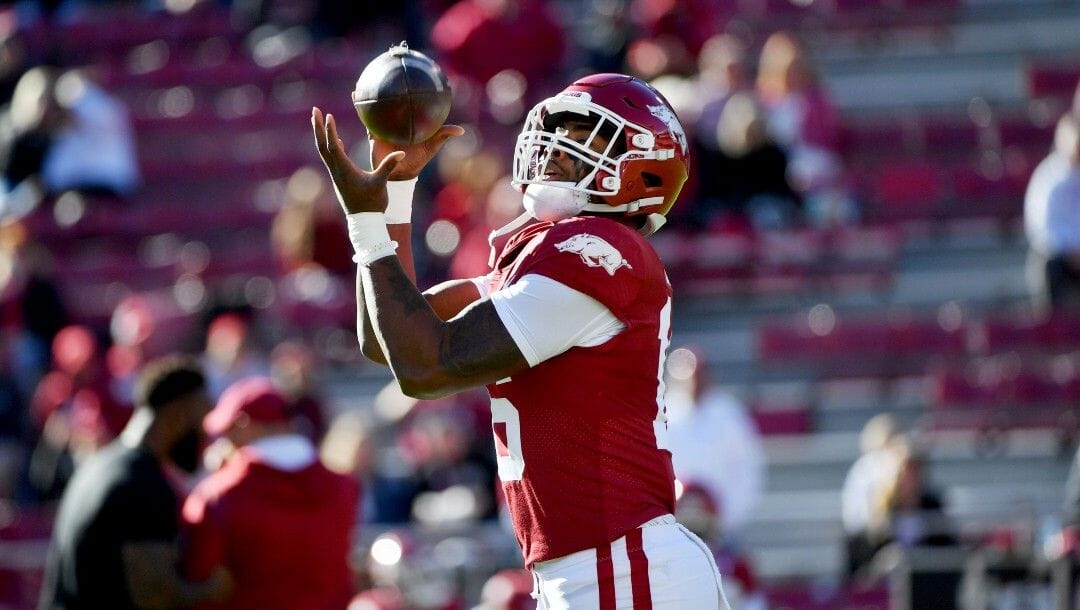 Treylon Burks was isolated out wide, exactly how Arkansas designed the play.

Four Razorbacks were out to the left, while Burks was alone to the right. Down 31-14 against Alabama, they faced a third-and-1. So Arkansas turned to Burks, one of the best wide receivers in this year’s NFL Draft.

Defensive back Josh Jobe tried to cover Burks on a vertical route, but when the ball was underthrown, Burks came back and caught it. From that point, he had room to run.

He scampered upfield, and by the time he crossed the goal line, five defenders were in his wake. Burks was too fast for them.

Burks is capable of explosive plays like this against elite competition.

Burks has the fourth-best NFL Draft odds to be the first wide receiver taken at +1000. His odds of being taken first are +30000.

Michigan defensive end Aidan Hutchinson has the leading NFL Draft betting odds to be picked first at -250 as of April 8.

The Green Bay Packers need assistance at wide receiver, and it’s reasonable for them to take two in the first round of the draft.

Among their top three receivers a year ago, the Packers lost two this offseason. Davante Adams, who was traded to the Raiders, and Marquez Valdes-Scantling, who signed with the Chiefs, were responsible for 37% of Green Bay’s receptions, 39% of their targets and 44% of their receiving yards last year.

With Aaron Rodgers at quarterback, the Packers were second by offensive DVOA, according to Football Outsiders. The success of their team has hinged on a potent passing attack.

The Packers have plenty of options at wide receiver in this draft. Burks, with the 22nd overall selection, would be a logical choice for Green Bay.

Burks made an impact immediately as a freshman and became one of the best Arkansas receivers the program has seen.

In 2019, he started nine games and led the team with 475 yards on 29 receptions. He also added 130 yards on 12 punt returns and 226 yards on 10 kick returns. He made the All-SEC second team as a returner and all-conference freshman team.

As a sophomore, he paced the Razorbacks with 820 yards, 51 catches and seven touchdowns to go with 75 yards on 15 carries. He was third in the SEC with 91.1 receiving yards per outing. He had five catches of 40 or more yards on his way to earning all-conference second-team accolades.

And in 2021, he became the fourth Arkansas receiver to tally 1,000 yards in a season en route to All-SEC first-team recognition. He tallied 1,104 yards and 11 touchdowns on 66 receptions as well as 112 yards and a score on 14 rushes. He set a program record with six 100-yard games in a season.

When the ball is in the air, Burks showcases what makes him so difficult to defend.

Even when a defender is covering him well, Burks has the concentration to fight through contact for a catch. He also adjusts well to throws, placing himself in a favorable position for those receptions.

As he did in the Alabama game last season, Burks consistently did so. And he earns those catches lined up anywhere — out wide, in the slot or even in the backfield.

At 6-foot-2, 225 pounds with 33.5-inch arms, Burks has the frame to defeat defensive backs for those 50-50 passes. It also makes him difficult to take down after the catch.

The only tape you need to watch on Treylon Burks 🎥

He did this on back-to-back plays 🤯pic.twitter.com/xc93OJWkKx

On a third-and-11 in that matchup with Alabama, Burks was in the slot. He ran upfield and cut toward the middle on an in route behind a linebacker.

He caught the following pass just beyond the defender’s reach. Then when a defensive back tried to stop him short of the line to gain, Burks kept his balance and his feet churning, resulting in a first down.

At the NFL Combine, Burks clocked in at 4.55 seconds in the 40-yard dash. He doesn’t possess outstanding top-end speed, though he can accelerate rapidly. The breaks on his routes aren’t choppy, as he rounds his turns often.

That didn’t help him gain separation, so Burks had to win via contested catches. Arkansas designed plays around this skill, so maybe it will be enough for him at the next level.

Arkansas also relied on Burks in the ground game. He was physical, not afraid to attack potential tacklers with stiff arms or simply by trucking them. This trait also showed up in his blocking.

He adjusts quickly, which helps him get open against zone coverage. Against Texas A&M, Burks was in the slot to the right on third-and-22. On a crossing route, he ran between two linebackers and located a soft spot in the defense.

He ended the play by jumping and catching a pass with one hand. Burks, flat out, is capable of hauling in passes no matter the challenges a defense, even in the NFL, may throw at him.