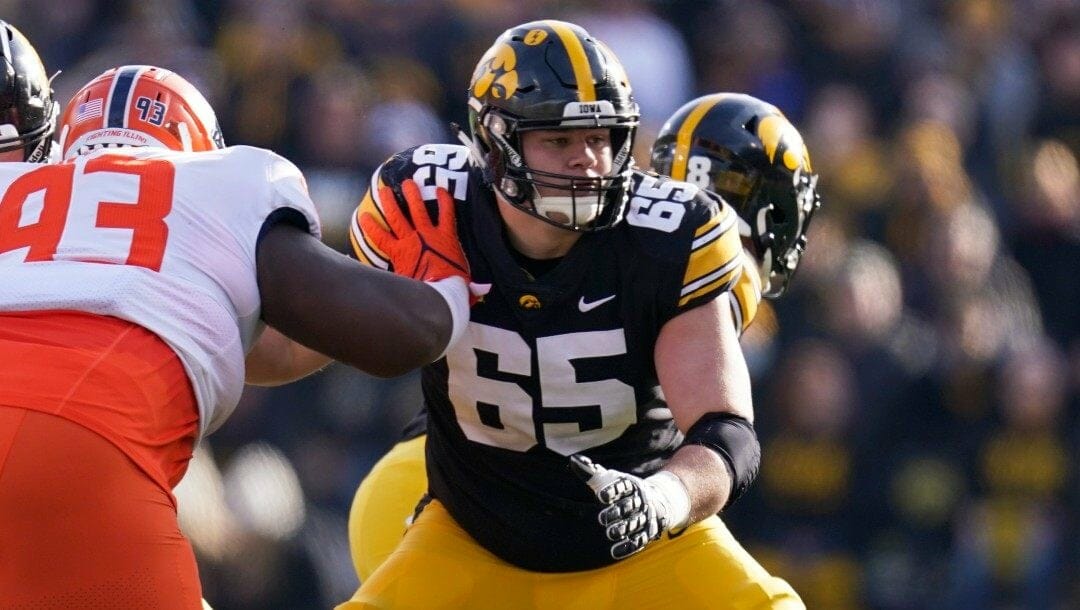 Tyler Linderbaum was too fast, too sound, and too smart. Not even three defenders could avoid him.

The Iowa center, who’s among the top offensive linemen in this year’s NFL Draft, faced a four-man front against Indiana. And he knew exactly where to go.

First, he pivoted to his right and chipped in on a defensive tackle block. Then, he shuffled upfield and collided with another D-tackle who was flowing toward running back Tyler Goodson. Then Linderbaum finished the play by getting in the way of a linebacker.

Plays like these prove Linderbaum has potential to succeed in the NFL.

Linderbaum is tied for the 13th-best NFL Draft odds to be selected first overall at +15000.

Michigan defensive end Aidan Hutchinson has the leading NFL Draft betting odds to be picked first at -350 as of March 24.

The Jacksonville Jaguars have the first overall pick. They could use help at essentially every position except quarterback after selecting Trevor Lawrence in last year’s draft.

The New York Giants need help up front, and Linderbaum would provide it with the seventh overall pick.

The Giants have a shot to select Ekwonu, or one of the other top offensive linemen, at No. 5. But the addition of Linderbaum would bolster the position group, changing it from below-average to respectable.

Last season, the Giants were 14th in adjusted sack rate and 31st in adjusted line yards on the ground, per Football Outsiders. Pro Football Focus ranked their pass blocking 30th and their run blocking 21st.

To further underscore their need up front, starting center Billy Price, right tackle Nate Solder, right guard Will Hernandez and left guard Matt Skura are all free agents this offseason. The Giants have picked up a few guards, so Ekwonu and Linderbaum would fit with the Giants.

While not many numbers can be used to measure Linderbaum’s impact, awards can.

He was a two-time All-American after moving to the offensive side of the ball from defensive line heading into the 2019 season. That year, he started all 13 games and was an All-Big Ten honorable mention.

The following year, he was a first-team All-American after starting all eight games. He was also a finalist for the Rimington Trophy, which goes to the best center in the country.

And as a junior in 2021, he won the Rimington Trophy. He was a consensus All-American and the Big Ten Conference Rimington-Pace Offensive Lineman of the Year.

The Best Center in the Nation ‼️

Linderbaum is athletic and disciplined, two traits which will benefit him greatly at the next level.

He usually is superb with his hand placement and footwork. At his height, he naturally has better leverage than a lot of defenders.

However, that can be a weakness.

At 6-foot-2, 296 pounds with arms measured at 31 1/8 inches, Linderbaum is at a disadvantage physically. In particular, his stature can leave him vulnerable to bullrushes.

Against Indiana, Iowa faced a four-man front with two linebackers. Linderbaum set up at the snap, ready in case either defensive tackle shed their blocks. When they didn’t, he advanced and neutralized one of the linebackers, clearing the way for a touchdown run by quarterback Spencer Petras.

Tyler Linderbaum's 96.6 Run Blocking Grade this season is the highest by any offensive lineman 💪@HawkeyeFootball pic.twitter.com/SyRuuOE3QF

Linderbaum’s agility allows him to thrive in a zone running scheme. He has quick first steps after the snap.

He can also use that speed to recover when he’s beat. So if he gains some more strength and size, he may be able to adjust to other schemes as well.

Linderbaum, in a game against Wisconsin, faced a defensive tackle lined up across from him in a shotgun formation. He was fast enough to get the snap off and shove his opponent out of the way and eventually to the ground. This created a wide-open pocket and showcased his aggression.

The question for Linderbaum isn’t about his skill set. It’s whether a team that is the right fit for him believes a center is worth drafting highly.