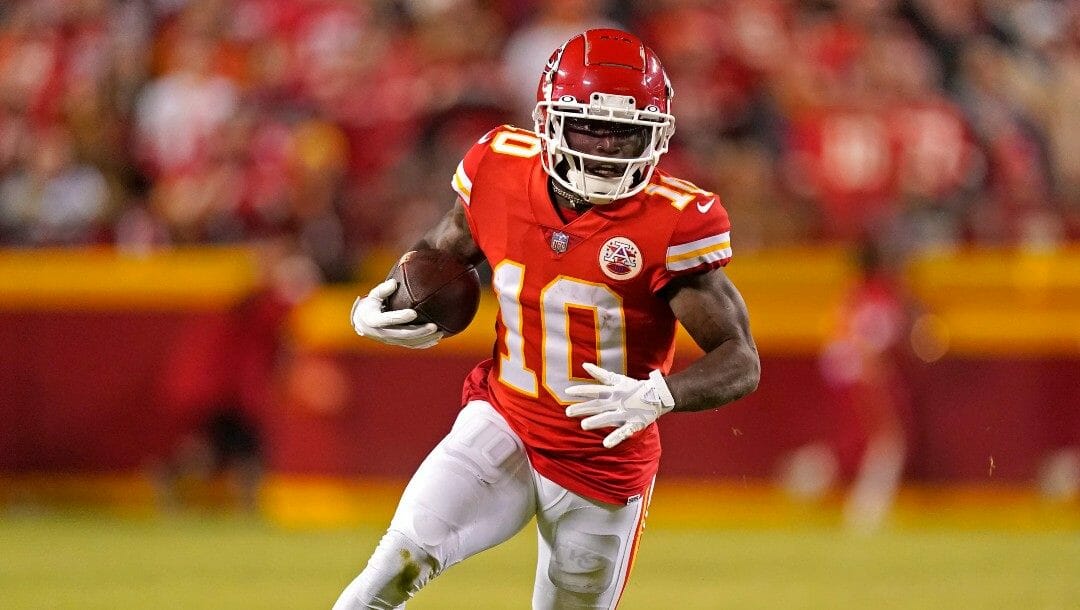 Similar to other standout NFL names, Tyreek Hill is on the move.

The All-Pro wide receiver has been traded from the Kansas City Chiefs to the Miami Dolphins. Though this does little to affect their Super Bowl odds, it alters both offenses in significant ways.

.@MiamiDolphins odds to win the Super Bowl at @BetMGM

The Chiefs have Super Bowl betting odds of +900, which is third in the league.

The Chiefs are picking up a fair amount of draft picks for Hill, ESPN reported.

The Dolphins are giving up a first-rounder, second-rounder and fourth-rounder this year. They’re also sending picks in the fourth and sixth rounds next year.

The Chiefs now have back-to-back picks in the first round at Nos. 29 and 30. They also have pick Nos. 50 and 62 overall, which are both in the second round.

Even after today’s trade for former Chiefs’ WR Tyreek Hill, the Dolphins still have two No. 1s next year – their own and San Francisco’s.

The Dolphins are giving Hill a $120 million extension over four years, according to ESPN. That’s including $72.2 million guaranteed.

Just a week after Davante Adams became the highest-paid wide receiver in the NFL, Hill’s contract goes a step higher.

With rare speed, Hill brings a unique dimension to the Dolphins’ offense.

The six-time Pro Bowler and three-time All-Pro has totaled 6,630 yards and 56 touchdowns on 479 receptions in his career.

Hill was seventh by Football Outsiders’ DYAR metric and fourth in effective yards in 2021. He was graded the ninth-best receiver by Pro Football Focus.

Last season, he tallied a career-high 111 catches that went for 1,239 yards and nine touchdowns. Despite the threat he is downfield, only 11 of his catches were of 20-plus yards, though they went for 398 yards. PFF rated him tied for the 11th-best receiver in that area.

He was the fourth-best receiver on short passes (up to nine yards downfield). He had 65 catches for 511 yards and four touchdowns on such passes.

He was the fifth-graded receiver on passes 10-19 yards downfield. He totaled 33 catches for 522 yards this way.

How Tyreek Hill will look this season: pic.twitter.com/9nOScWgloF

Dolphins quarterback Tua Tagovailoa threw 20-plus yards only 7.5% of the time, but he was effective when he did. He was graded the top passer among those who played five or more games.

However, he was out of the top 28 in all other areas. Hill’s presence may help with that, while also giving him more opportunities to capitalize on deep shots.

This offseason, the Dolphins have already added Terron Armstead, the former Saints offensive tackle who was graded fourth at the position by PFF a year ago, to help protect Tagovailoa.

The Dolphins also brought in free agent running backs Raheem Mostert and Chase Edmonds, who both have flashed moments of brilliance and could keep pressure off their QB with an effective ground game.

This is all adding to an offense featuring second-year wideout Jaylen Waddle, who tallied 1,015 yards and 104 catches as a rookie, and standout tight end Mike Gesicki, who added 73 catches and 780 yards last year.

The Dolphins have successfully surrounded Tagovailoa with talent on offense. It’s now up to new head coach Mike McDaniel, the former 49ers offensive coordinator, to lead the team back to the playoffs.

While the Chiefs are now missing one of their best skill players, they should still pose as one of the best NFL offenses. Patrick Mahomes is still among the favorites for NFL MVP, and Travis Kelce is still one of the best tight ends in the league.

The Chiefs signed former Pro Bowl wideout JuJu Smith-Schuster to at least alleviate the dropoff they have at that position. They could also use their first-round picks to bolster the position in a draft loaded with receiving talent.

Jameson Williams of Alabama, Chris Olave of Ohio State, Treylon Burks of Arkansas and Drake London of USC could be available late in the first round. The Chiefs also could trade to pick up Ohio State’s Garrett Wilson, as well as pair him with another of the aforementioned receivers later on.

However, the Chiefs’ defensive deficiencies were exploited last year in the playoffs. They may want to address that instead. Either way, they have issues to fix.