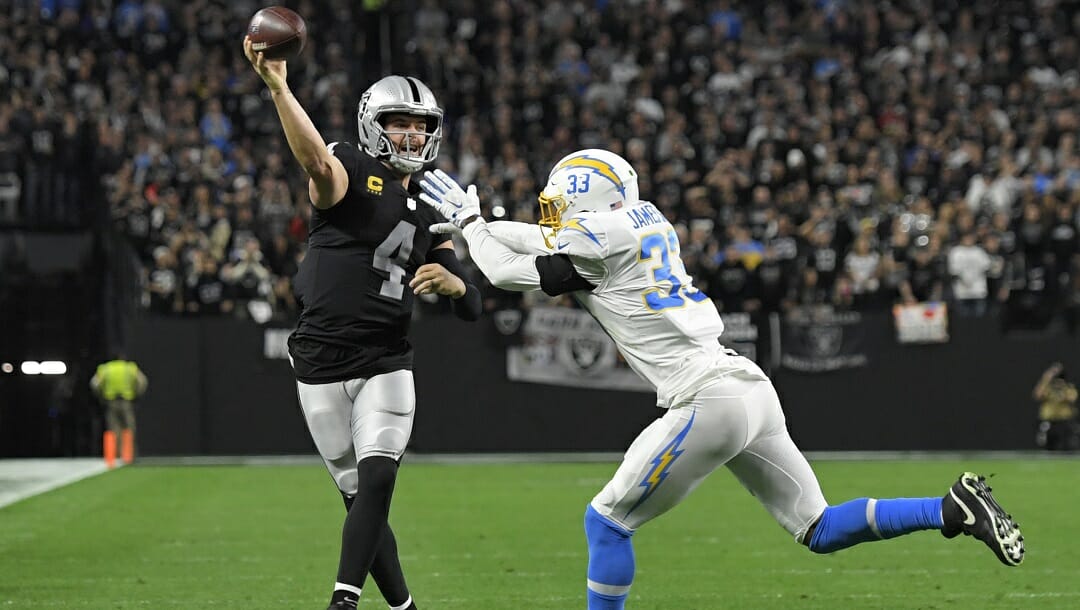 In the last six years, five different quarterbacks have led the NFL in passing yards. Among the top 12 in NFL betting odds to lead in that category in 2022, only Tom Brady accomplished that feat.

Justin Herbert has the best odds at +700. It’s reasonable to believe someone who has never thrown for the most yards in a single season before will do so in 2022. With that in mind, here’s a look at three quarterbacks who are underpriced in NFL betting odds to take the passing yards crown.

Underpriced Props for Most Passing Yards

At +1000, Carr is sixth among passing yards odds. And yet, he has a strong case to be the one who leads in this statistic when all is said and done.

But among those QBs who were also in the top five, Carr was the only one who was also top five in completion percentage and completion percentage above expectation, according to Next Gen Stats. That means he was hitting his targets consistently, even when facing tougher circumstances like tight coverage and incoming pressure.

Completing throws to receivers can only lead to more chances for Carr to rack up yards. And with Josh McDaniels as the Raiders’ new head coach, Carr should continue to play at a high level.

That’s also without mentioning the Raiders’ receiving corps, which made a massive upgrade with Davante Adams. Last season, albeit with Aaron Rodgers, Adams caught 123 passes for 1,553 yards.

The Raiders also still have tight end Darren Waller as a big target over the middle and Pro Bowl receiver Hunter Renfrow, who can catch passes underneath. Adams, Carr’s former college teammate who can line up all over the field, will demand defensive attention away from Waller and Renfrow.

This should make things all that much easier for the former Fresno State star.

Maxx Crosby led the NFL in hurries with 77. Von Miller was second with 59 @PFF

Allen is the NFL MVP odds favorite at +700. But he’s still tied for the seventh-best odds to lead the league in yards with Dak Prescott at +1200.

That’s partly because Allen will gain a substantial amount of yards on the ground and garner plenty of MVP votes if the Bills are as successful as expected.

However, Allen is still a prime candidate to pass for over 5,000 yards, which only Brady and Herbert did in 2021.

Allen was eighth in the NFL with 4,407 passing yards. But he was seventh in intended average air yards, meaning he passed deep whenever he did look downfield.

Logic may also suggest Allen won’t have the passing volume to best all other quarterbacks through the air because the Bills rely on his rushing abilities, and they might be winning so often that they might not need to pass.

But that wasn’t true last year. He was fourth in the league with 646 attempts.

And all of Buffalo’s 11 wins were decided by double-digit points. So even though the Bills were often in control of games, Allen’s pass attempts were still among the most in the league.

With odds to lead the NFL in passing yards at +3000, Lawrence is the darkhorse of the group.

But it’s common for quarterbacks to make a substantial leap from Year 1 to Year 2. And it’s especially reasonable for Lawrence, a generational prospect as the 2021 No. 1 overall pick, to make those same improvements.

The passing volume will be there for Lawrence. He was seventh in the league with 602 attempts last year, and the Jaguars will probably be trailing in games often enough in 2022 to force Lawrence to pass possibly even more often.

2021 #Jaguars stats: While Trevor Lawrence was 7th in total pressures faced and second in times hit as throwing, he was tied for 20th in # of sacks taken @PFF

James Robinson was 6th in DVOA and 7th in DYAR. He's expected to be the backup for Travis Etienne @fboutsiders

The Jaguars made some upgrades around Lawrence. For one, Urban Meyer is out, and Doug Pederson, who almost made Carson Wentz an MVP with the Eagles, is at the helm.

Secondly, the Jaguars’ skill position players will be better. The team signed wide receiver Christian Kirk, though for too much money, as well as tight end Evan Engram. Those two, along with returning receiver Marvin Jones Jr., should complement each other well and provide Lawrence with the type of targets he needs.

And in the backfield, Lawrence’s former college teammate at Clemson, Travis Etienne Jr., will be back after missing last season due to injury. Etienne is most dangerous as a receiver out of the backfield, which means even more yards for Lawrence.