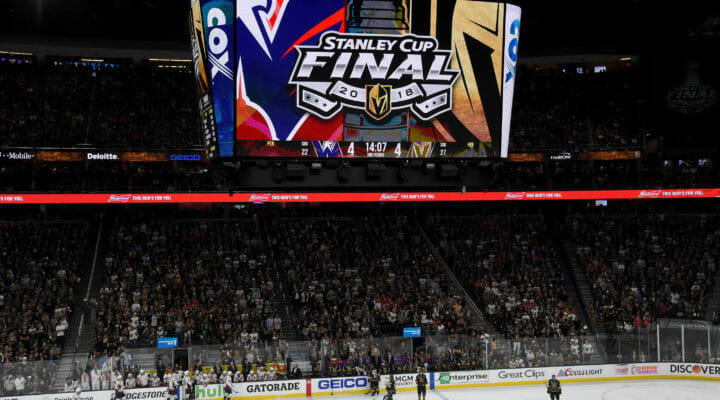 The 2020 Stanley Cup qualifiers began on August 1st, and NHL fans may be wondering which teams are likely to perform, and which teams may disappoint. Find out in our NHL power rankings for 2020.

If you’re planning on placing a sports bet on one of these NHL teams, we believe they don’t have what it takes to make it into the top eight, or that they may need to put in a lot of effort to get there. As a result, our analysis is shorter for each of these teams.

Many people agreed that the Canadiens are very unlikely to reach the postseason, and that they should use these games as a learning experience, but recent play, including a Game 3 win against the Penguins may see them rapidly rise up the ranks.

This is another team that people had low expectations of, but a 2 point lead against the Oilers may see all that change.

This may not be saying much, but the Coyotes haven’t had this good a shot since 2012. However, their young team lacks the experience to place them higher up in our rankings.

New goaltender Sergei Bobrovsky has failed to meet expectations, as has the new head coach Joel Quenneville. The Panthers will need to work overtime to improve their performance.

The release of Bruce Boudreau as head coach, and the promotion of Dean Evason to his place did seem to give the team some success pre-pause. Can they pick up where they left off?

The Canucks are not a bad team, just a young one lacking in experience. The recovery and return of goalie Jacob Markstrom will almost certainly be good for the team.

The Predators are known as an inconsistent team at best, and their recent loss to the Coyotes may soon result in their exit.

Goalie Igor Shesterkin impressed in his games before the pause, but will he be able to make a difference after his injury? He’s set to start in Game 3, so we’re going to find out.

The Islanders may have a solid defense, but they need to fix their offensive power, which is amongst the bottom teams in the league.

The Calgary Flames have underperformed so far this season, but they have room to perform much better, especially considering their first place finish in the last Western Conference season.

Vezina Trophy finalist and goalie Connor Hellebuyck is the only reason this team isn’t further down the list. Many single-handedly credit his performance with covering up for the Jets’ blue line weakness.

This team makes it this high on our list due to sheer guts. Their roster was heavily impacted by injuries, but coach John Tortorella somehow seems to be making it work.

These teams are undoubtedly the strongest, or require the least amount of work to be a threat to the top five. We go into a bit more detail on the performance of each of these teams.

The Hurricanes may have Sebastian Aho and Andrei Svechnikov to bolster the performance of their team, but they may be down key defensive players Dougie Hamilton and Brett Pesce. Pesce recently joined Hamilton in the bubble, but there’s no word on when they’ll be able to play. There are some rumors Hamilton will be ready for Game 1, but there’s no confirmation on that yet.

The Oilers is home to Connor McDavid, a player that many consider to be the best in the league. Some believe that he could even rival Wayne Gretsky at some points in his career. For some sports betting fans, this may be enough reason to wager on the team. With the winner of the Art Ross Trophy, Leon Draisaitl, at his side, the team undoubtedly has impressive offensive power.

This team undoubtedly has good offensive power, but the Maple Leafs have an inconsistent defensive line that may be costing them wins. Goalie Frederik Andersen has been receiving criticism from fans and analysts, who performs well during the regular season but seems to falter in the playoffs.

They say the best offense is a good defense, but in the Star’s case it may be the other way around. With only 2.52 goals against them in each game, the Star’s defense is second only to the number one team, the Bruins. If Ben Bishop and Anton Khudobin can keep this up, the Stars might rack up even more victories.

The pause may have put an end to the Flyer’s momentum, and hopefully this won’t result in the team missing playoffs yet again this year. Some are particularly concerned that goalie Carter Hart may lack the playoff experience needed for this team to truly shine. However, if their recent victory over the Capitals is anything to go by, the Flyers will continue their pre-pause streak.

The experience that this roster has will undoubtedly prove valuable as the team returns to the ice. Captain Sidney Crosby, not necessarily the highest performing player on the team, has been able to step up recently and score key goals in the team’s first two qualifying games. Hopefully he can continue to rally the team moving forward.

The Golden Knights seem to have regained their footing after new head coach Peter DeBoer was brought in. The addition of goalie Robin Lehner to support Marc-Andre Fleury is a welcome boost to the team’s defensive roster and could help this team challenge the top three on this list.

The Capitals were not off to the greatest start this year, but the pause may have given the team a chance to reset and recover. However, the team recently announced that they are down center Lars Eller, who left the bubble to attend to family matters. The Capitals will need to fill that gap if they want to maintain their performance.

The pause may have given Colorado some time to recover some of their strength, with numerous players, including Andrei Burakovsky, Cale Makar, Mikko Rantanen, and Nathan MacKinnon, being affected by injuries. Makar in particular will provide a much-needed boost to the defensive lineup.

This team is already known for its high level of skill and very few weaknesses, but reports are coming out that center player Brayden Point has gotten even faster during their scrims. However, Captain Steven Stamkos, who had just recovered from health problems in March, is again on the bench after recently suffering a knee injury. As a result, we’ll have to wait and see if they can avoid a repeat of last year’s postseason performance.

The defending Stanley Cup champions are trailing the 2019 season number two by six points, but with key scorer Vladimir Tarasenko being out of action since late 2019, this is not surprising. He’s recently recovered from his shoulder injury and is back on the lineup, which makes a Blues/Bruins final increasingly likely.

Leading the pack with a very healthy points percentage of 0.714 and a total of 100 points, it’s unsurprising to find the Boston Bruins at number one. If they can keep on performing at this level, the Bruins are likely to claim the Stanley Cup. This would undoubtedly make their fans happy after their 4 - 3 loss to the Blues in 2019’s final.

Go for the goal with BetMGM

A reliable sportsbook or casino with sports betting services can provide you with key insights into NHL betting, regardless of if you’re new or an online sports betting veteran.

This is why you should place your bets with BetMGM.

BetMGM offers great sports betting services to New Jersey, Nevada, Indiana, and West Virginia residents and has recently become the official betting operator for the PGA Tour. We provide you with great NHL odds, betting lines, and picks, so you can always make an informed wager.
Visit BetMGM to begin placing your NHL sports bets today!