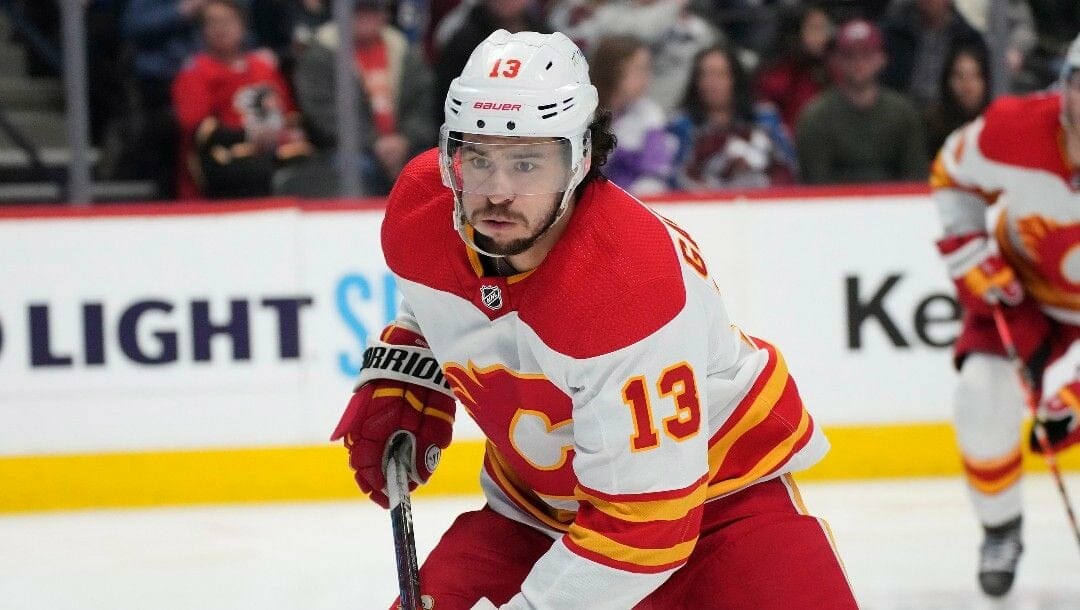 Playoff races are heating up, with NHL playoff odds changing by the day, and there’s at least one must-see matchup on Monday’s slate.

The Los Angeles Kings are chasing down the Calgary Flames for the top spot in the Pacific Division, hosting them for the last time this season.

Flames winger Johnny Gaudreau is including himself in the Hart Trophy conversation.

The 28-year-old is fourth in league scoring, accumulating 92 points through 68 games, including 10 over his past five games. There’s a disconnect between his output and production, suggesting that he’s a regression candidate to end the season.

Across all strengths, Gaudreau has a 65.5% expected goals-for rating, which looks a lot smaller when we compare it to his actual rating of 73.9%. That shift relates to Gaudreau’s inflated output.

The forward has been on the ice for 130 goals this season, which is a substantial deviation from his projected total of 94.5. Consequently, his PDO is shifted to a team-high 1.060. Gaudreau is riding an unsustainable stretch and is due for a letdown.

This could start to slow down starting against the Kings on Monday night.

The Kings have tightened things up in their defending zone, limiting their opponents to nine or fewer high-danger chances at five-on-five in each of the past two outings. That coincides with diminished Flames metrics, as Calgary has attempted eight or fewer quality opportunities in two of their past three.

It’s not very often that Gaudreau is held off the scoresheet, but that’s what I am predicting for Monday.

This is mesmerizing from Johnny Gaudreau 🪄#Flames pic.twitter.com/SAE9YmYhfa

Giants collide at the Amalie Arena Monday as the Leafs look to assert themselves as the second-best team in the Atlantic Division.

A victory gives the Maple Leafs an outside shot at catching the Florida Panthers for the top spot in the division; however, they will have to find a way to limit Nikita Kucherov, who’s coming into this one in fine form.

Kucherov is riding a four-game point streak into the contest, the last three of which have been multi-point efforts.

There’s a fairly reliable pattern worth noting in that trend, Kucherov’s ability to score at home. The Russian winger has multi-point efforts in nine of his 13 home games this season, totaling 20 of his 43 points and an average of 1.5 points per game.

Those stats are backed up by some pretty impressive underlying metrics. Kucherov drives possession on the ice, posting a team-best 60.2% Corsi rating across all strengths, creating an average of 6.2 high-danger and 14.4 scoring chances per game.

Kucherov has put the puck on net more frequently. The former Hart Trophy winner has attempted four or more shots in three of his past five, averaging 3.6 shots per game over his past 11.

Kucherov’s shots and points player props are right on his averages. Still, it’s worth taking a stake on over 1.5 points and 3.5 shots at plus-money.