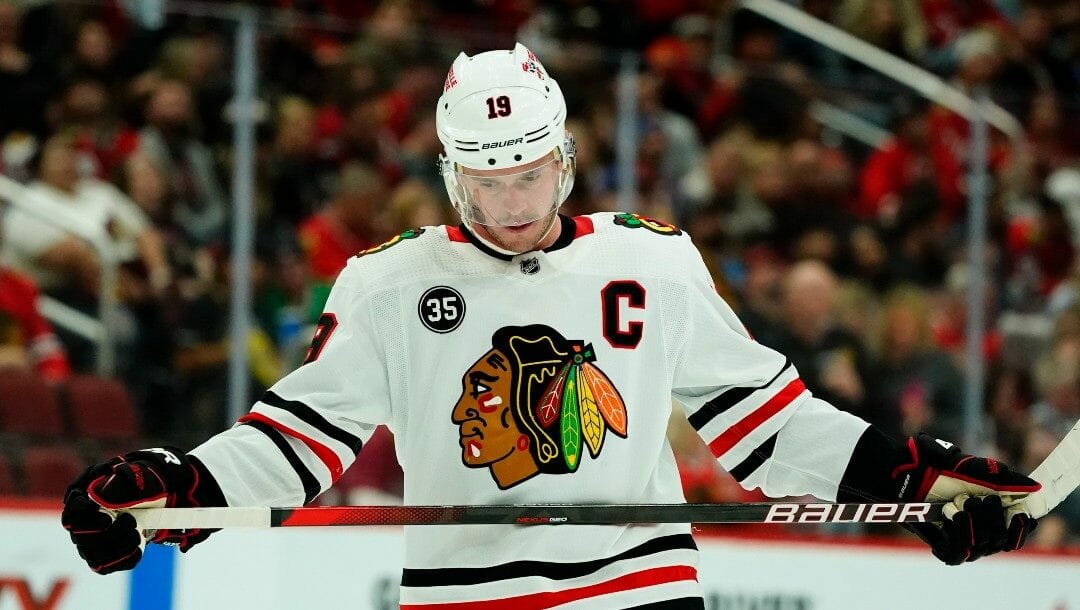 This is it, the final week of the NHL regular season, but somehow we’re left with one measly game Monday night.

When it comes to NHL betting, many will look to the NHL betting lines, but player props are a nice alternative, especially on a night when there’s only one game.

That game is the Philadelphia Flyers taking on the Chicago Blackhawks. Here are some of the player props I am looking at.

No matter how bad things get in Chicago, Jonathan Toews is always there to pick the team up. The veteran center plays a hard-checking two-way game and although he’s light on points this year, the captain is starting to find his way onto the scoresheet.

Toews has points in three of his past four games, totaling four assists over that span. Still, the former Selke Trophy winner remains well off his expected goals-for rating, posting an actual mark of 44.6% below his expected value of 47.7%.

That implies that there’s still room to grow for Toews, who remains below his career averages in points per game and shooting percentage.

The Blackhawks deploy Toews on their powerplay unit, giving him the fourth-most time with the man advantage. Toews and the Hawks will have plenty of opportunities to cash in against the Flyers’ 24th-ranked penalty kill, which allows goals 24.4% of the time.

I am anticipating Toews to continue his recent upswing against the Flyers. The 33-year-old has one of the shortest prices on his 0.5-point total and is a steep +280 as an anytime goal scorer. I see the value in both.

The Blackhawks have been entirely ineffective at preventing goals, allowing four or more tallies in seven of their past eight games.

That should mean big things for a Flyers offense that has recorded 10 goals over their past couple of games. Owen Tippett has been trending positively over his recent sample and we’re expecting his effort to pay off against the Hawks.

Tippett isn’t the Flyers’ most prolific scorer, finding the back of the net nine times in 60 games, but he’s recently taken on an increased role with the team. Since the trade deadline, the 23-year-old is playing above-average minutes, and more recently, he’s amplified his presence in the attacking zone.

Tippett has 13 shots on net over his previous four outings, directing five shots on target twice over that stretch.

Those performances are part of a more sincere effort from the team, as Philadelphia has attempted 46 high-danger chances over the four-game sample, well above their season average of 8.1 quality opportunities per game. That’s compatible with a downturn in the Hawks’ defensive metrics, as they’ve allowed 12 high-danger chances in three of their past five.

This season, the Flyers have been rudderless offensively, with no player recording more than 51 points. Tippett has increased his role on the team over the past month and I am expecting that to pay off against the Hawks on Monday night.