NHL Betting: Will Lightning Have Any Issues With Rangers? 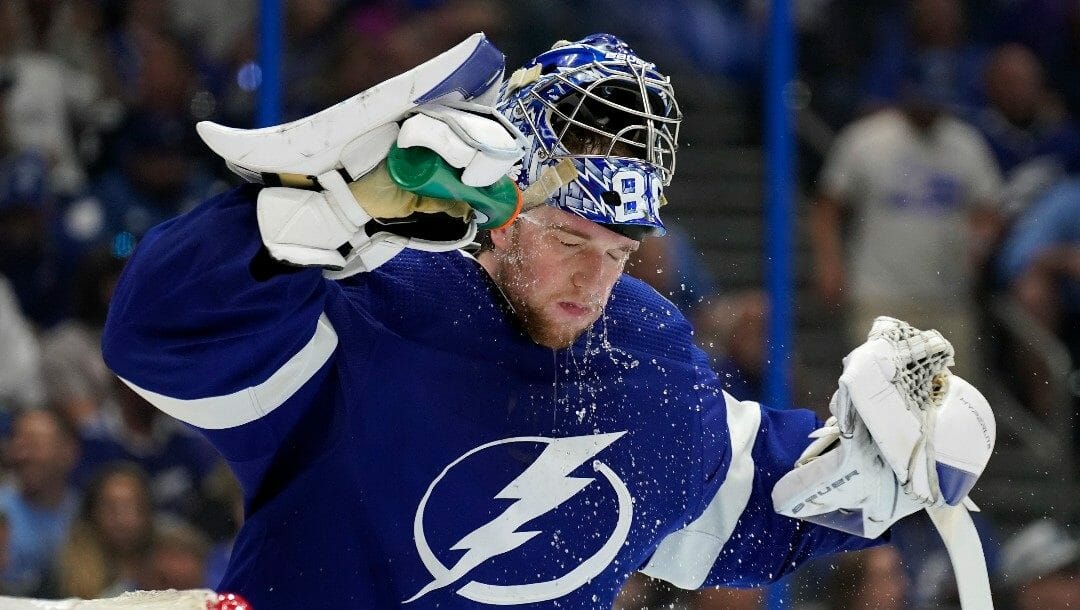 The New York Rangers, after staving off elimination on five separate occasions in the first two rounds, are now faced with the gargantuan task of playing the Tampa Bay Lightning in the Eastern Conference Final.

NHL playoff odds have the Lightning as -182 favorites to advance to their third consecutive Stanley Cup Final.

You wouldn’t expect the Rangers, with home-ice advantage and a flawless 3-0 regular-season record against the Lightning, to be classified as underdogs.

Not only did the Rangers win each contest, but they also outscored the Lightning in every period. The Lightning scored first in two of three contests but were unable to turn those strong starts into wins.

That trend has not extended into the playoffs. Scoring first and seeing games out is one of Tampa’s many strong suits thus far in the postseason, with Jon Cooper’s team an impressive 7-1 when netting the first goal.

New York won twice in Tampa and once at home, but was outshot in every contest. With Igor Shesterkin between the pipes, that statistic comes as no surprise.

Mika Zibanejad scored four goals including a hat trick and will have to continue his success against the Lightning for his team to pull off the upset. The 29-year-old centerman is third in playoff scoring with 19 points and is one of the main reasons the Rangers are still standing.

Which Team Has the Advantage & Where the Series Will Be Decided?

The Rangers extraordinarily staved off elimination five times against the Hurricanes and Penguins.

They’ll need every ounce of that resilience against a well-rested Lightning team, who swatted aside the Florida Panthers in four games.

The Rangers are lethal with the man advantage, scoring on 13 of 40 opportunities for a second-best 32.5% proficiency. New York was 7-for-21 against the Hurricanes and scored four with the extra man in the final two games of the series.

The momentum New York garners with the man advantage is a key variable to their playoff success. There’s only one other facet of the Rangers’ game that is more important. And he goes by the name of Shesterkin.

The 26-year-old netminder struggled to find peak form against the Pens in the opening round. That was his first significant taste of playoff hockey, the only reason he underperformed in the early stages of the series.

He admittedly battled through the first round but has since returned to his Vezina-favorite form.

Against the Hurricanes, Shesterkin enjoyed sterling numbers, with a third-best .949 save percentage (Binnington was second, but only played two games before getting injured) and a second-best 1.72 goals-against average (GAA), behind only Andrei Vasilevskiy.

Shesterkin will have to be every bit as good in the Eastern Conference Finals, especially with Vasilevskiy backstopping the Lightning. If Shesterkin is the world’s second-best goaltender, Vasilevskiy is undoubtedly the best.

Tampa’s emotionless ace allowed three goals in the entire series against Florida. His numbers defy logic and are almost inconceivable. Against the Panthers, Vasilevskiy was 4-0 with a near-perfect .981 save percentage and a measly 0.75 GAA.

Since the start of the 2019-20 playoffs, he is 17-0 after losing and didn’t allow a single goal in six of Tampa’s recent seven series-clinching games. He has also backstopped the Lightning to 10 successive series triumphs.

While both goaltenders are the most important individuals of their respective teams, the Rangers’ overreliance on Shesterkin is marginally more pronounced.

Thanks to Shesterkin’s brilliance, the Rangers have the best goals against above expected (-12.56) in the playoffs. Tampa is third at -7.86.

On the other hand, the Lightning have Vasilevskiy to thank for their five-on-five league-best 1.78 GAA in the playoffs.

Interestingly, the Rangers have allowed the most rebound goals (8) in the postseason. Solely based on Vasilevskiy’s two Stanley Cups and his unmatched wealth of playoff experience, Tampa has the slight advantage in goal.

The Lightning, if they can nullify the Rangers’ threat with the man advantage, are too fresh, have too much talent and depth for New York to escape death row for the third successive series.

Tampa also has a distinct advantage when it comes to the intangibles.

Cooper’s team knows how to win at this time of year and will do whatever it takes to do so. The Rangers, by repeatedly escaping elimination, are off to a good start on that front, but simply cannot match Tampa’s incomparable winning pedigree.

Take the Lightning in six games.