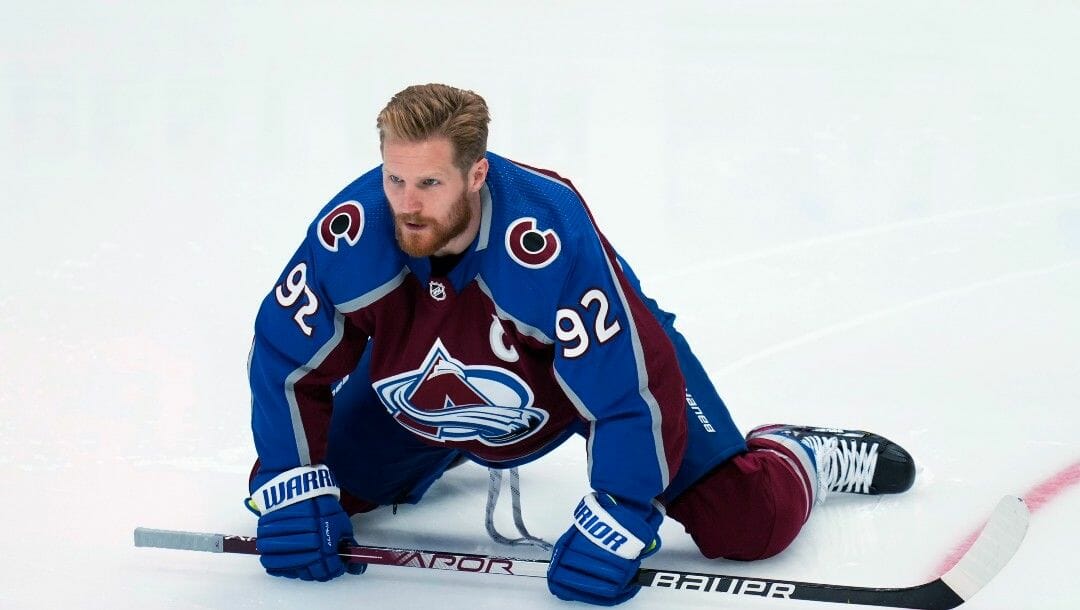 Colorado’s Gabriel Landeskog and Tampa’s Nikita Kucherov have the best claim outside of the four favorites to win the Conn Smythe Trophy.

NHL betting lines have Kucherov as the fifth favorite at +850, while Landeskog is the seventh favorite with +1400 NHL odds.

Let’s first recognize and touch on the enormous elephant thudding around the cramped room. Kucherov was picked due to a steadfast belief that Tampa will represent the Eastern Conference in the Stanley Cup Final.

While the possibility of Kucherov or Landeskog winning the Conn Smythe is comparatively unlikely, either player, with an unforgettable upcoming fortnight, could ascend to unparalleled heights and get their name etched on one of the most difficult individual awards to win.

Kucherov is an elite talent who’s becoming more influential the closer Tampa gets to its third Stanley Cup Final berth.

The diminutive right winger can pick a pass from anywhere on the ice, whether he sees the recipient or not. A vivid example of his uncanny wherewithal was on display for Ondřej Palát’s late Game 3 winner.

Kucherov spotted Palát before receiving the puck and didn’t require another glance, instead placing the biscuit with a no-look backhand pass directly into Palát’s stride.

It’s not just the level of difficulty, but his ability to execute in a high-pressure environment with the season on the line.

With 21 points in 15 games, Kucherov leads the Lightning in scoring and is sixth overall. He is fourth amongst those still playing.

Of the remaining players, Kucherov is second with 1.40 points per game. Only Cale Makar, who has 1.57 points per game, is scoring at a more prolific rate.

His five power-play goals trail only Zibanejad’s six among active players. Kucherov has 3.95 points per 60 minutes of ice time, which ranks eighth among active skaters.

But it’s his play since the start of the Florida series that has pole vaulted him into the Conn Smythe conversation. Since the start of that series, Kucherov has 13 points (five goals, eight assists) in eight games. His 1.63 points per game during that time frame ranks third among active skaters.

If he finishes the job in the Eastern Conference Final and is the main offensive reason Tampa gets by New York, Kucherov has every chance of continuing his upward trajectory in the Stanley Cup Final.

That would surely give the Conn Smythe decision-makers something to think about, especially if Vasilevskiy’s form deteriorates, admittedly a highly improbable notion.

Colorado’s captain has gone about his playoff business in an unassuming, unheralded, yet effective way.

With 17 points in 14 games, Gabriel Landeskog is tied for third on the team in scoring, five points behind Cale Makar’s 22. That is by no means an insurmountable deficit.

He also has three power-play goals, tied for fourth among the remaining skaters.

His 11 even-strength points put him in the fifth spot, again among skaters still in the hunt for Lord Stanley.

Landeskog, who started his career in Colorado in 2011, is the Avs’ undisputed leader both on and off the ice. He has devoted his entire career to the Avs and, up until a few days ago, had never reached the Stanley Cup Final.

It’s almost second nature for players of his esteem and pedigree to single-handedly lift their team to unprecedented heights. Landeskog has the ability to do exactly that when the Avs face either Tampa Bay or New York.

With longer odds than both Makar and Nathan MacKinnon, seeing the Avs’ captain win the Conn Smythe would be like watching Jordan Binnington backstop the St. Louis Blues to the 2019 Stanley Cup all over again.